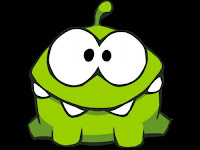 Cut the Rope iPhone: $Aus0.99
Cut the Rope HD iPad: $Aus1.99
Cut the Rope DSiWare: $Aus7.50
It’s not really the publisher Chillingo’s fault, but this is just embarrassing now. It’s fine if Nintendo wants to claim its games should be more expensive than stuff on the iPhone or iPad because it’s all about quality. People seem to buy that.
It’s not kosher in the slightest for Nintendo to charge seven times as much for an inferior version of an iPhone game. How this got priced at $7.50 is a breathtaking case study in price gouging.

It’s not that it’s a bad game. In keeping with its iPhone roots, Cut the Rope is utterly disposable, but it’s fun and quite charming. The goal is to get a candy suspended from a bunch of ropes into the mouth of a cute little monster, collecting stars along the way.

A swipe of the stylus will cut one (or multiple) rope(s) and send the candy plummeting down the gravity way. Other ropes in the way might grab the cookie, and then the game’s basic physics engine kicks into play, sending the cookie spiralling around to collect the out of the way stars.

Then the final goal, after three stars are collected, is to get the candy to the monster’s mouth. The game naturally starts easily enough, with some very straightforward puzzles. Later levels become very taxing, both on the mind and the reflexes.

What’s especially impressive about this game is the sheer number of levels. There’s five “boxes” (themes) to play through, and a couple hundred stars to collect, at three a level. There’s not enough variety to really maintain interest to get 100 per cent of those stars, but it’s good content for downtime nonetheless, as it was with the iPhone and the iPad versions.
What really, really lets this version down is the visual fidelity. The iPhone version looks good and clear with the retina display. The iPad HD game looks spectacular in the charming, cute, cartoon sense. The DSiWare version looks terrible by comparison, with blurry, compressed visuals that lack any of the personality of its cheaper companions. 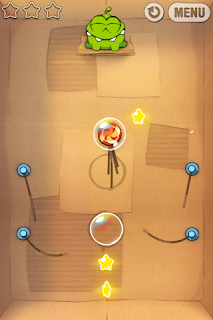 The cheery sound and music remains intact, and as the only job of the stylus is to swipe across the screen, this game plays as well (though not better) than its iPhone equivalent. The iPad game is still better as the larger screen is more comfortable for those rare moments where fine control is needed.

There’s a reason Cut the Rope is a popular iPhone/ iPad game – it’s happy, charming and good quality for those five minute bursts. It’s also in no way whatsoever worth $7.50 and unfortunately for Chillingo, there is no way whatsoever Nintendo’s ridiculous pricing policy allows me to recommend this to anyone.
If you have an iPhone or iPad, get that version instead. If you don’t, then you don’t need to play this game for $7.50. It’s not an essential game, and it’s very overpriced.