Arkedo Series – 02 Swap is less obviously retro than its predecessor, Arkedo Series – 01 Jump, which we reviewed not so long ago. But this is more rounded, better realised package, and as such it’s an easy recommend.

It’s worth noting from the outset though, that this isn’t a new game. It’s been available on the Xbox 360 since 2009, but at least PlayStation owners can experience what is actually a really fun game.

Of course, the developers were working with an even more basic concept this time around than the 2D retro platformer that formed the basis of 01 Jump. 02 Swap is a match-4 puzzle game in the vein of Nintendo’s Puzzle League games. A grid of coloured cubes slowly makes its way up a screen, and by pulling four in a row, vertically or horizontally, the player can keep the grid from hitting the top (game over) of the field.

Really high scores are won in the game in the same way that just about everyone should be familiar with by now. Creating combos by lining up blocks in just the right way remains as fundamentally challenging as it’s ever been in the history of puzzle games, and as it was way back in the early days of Tetris and Mario & Yoshi, getting high scores in action puzzle games remains fun. More on that in a bit.

There’s also a couple of power ups that are introduced to the game slowly as the score escalates, though this is incredibly limited, even by match-4 puzzle standards. There’s a lightning bolt to remove large sections of the grid in one go, a clock to temporarially stop time, and some points powerups.

As the points get higher, the ante is upped as anyone who has played a puzzle game would be familiar with by now. The game throws in a couple of new coloured blocks to deal with, along with the traditional increase of speed, and this ups the difficulty the longer you play. For the most part it’s all very balanced, although the lightning bolt powerup is a touch too powerful in the player’s benefit for the frequency in which it appears, and keeps games going on perhaps a little too long. 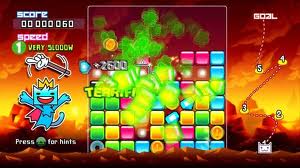 There’s an easy, medium, and difficult difficulty mode for the main score attack arcade game, as well as a simple and largely uninteresting story mode. Finish that and a handful of challenges open up, and these can be quite tricky. Unfortunately for this game, that’s about all there is in the package… but perhaps that’s appropriate for the retro flavour that the game carries itself on.

Where 02 Swap excels is in providing a control scheme that works on a conventional PS3 controller to the point where it’s almost as intuitive as the Puzzle Leagues and clones that use touch and stylus controls on iPhone, iPad and Nintendo handhelds. That’s some feat that in virtually no time, using the PS3’ left stick to move the cursor around, and the right to move the highlighted block in the desired direction feels easily intuitive. The game is both accurate and speedy in recognising inputs, and as a result, despite using a control input that is no longer ideal for this kind of game, 02 Swap gets away with it.

The game’s visual style is vibrant and colourful, though basic as you’d expect from a basic puzzle game, and while it’s a push to call it “retro,” it is retroish and charming. The soundtrack is genuinely annoying though with some very short, looped tracks that become annoying quickly. 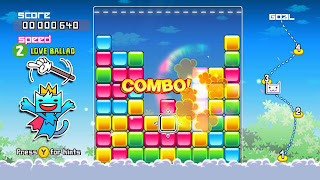 The big other thing worth mentioning is the online leaderboards. An absolute necessity in a game like this, but we’ve seen it obmitted from plenty of other games of this style before.

Overall, it’s really hard to criticise this game, so I won’t. Though 02 Swap is a limited and basic game, it plays really well and has near endless incentives to keep playing, to see your score run up the leaderboard. In other words, as a cheap downloadable game, it’s just perfect.