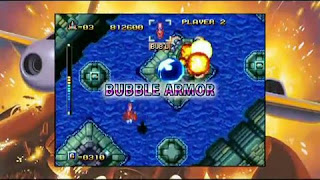 Challenge is one of the core ingredients that make a retro video game worth playing, but certain games undoubtedly go overboard with it. If the title in question has enough quality, though, it can make up for this and encourage less experienced players to join in on the fun. Alpha Mission is the perfect example of a game that goes ballistic with the challenge level, but doesn’t have the gameplay, visuals, ingenuity, or auditory experience to back it up. Instead, it offers questionable content that only the most niche of an already niche audience will enjoy.

Originally released in 1985, Alpha Mission is exceptionally straightforward. In this top-down vertical shooter, the goal is to complete each stage by shooting and dodging various hordes of moving enemies and whatever stationary machines target you. Your ship is equipped with a standard beam to take care of flying foes, as well missiles to dispose of terrain-dwellers. Chips can be found littered throughout the stages that offer improved ship performance over time, in various ways. Some power-ups include improved speed, a temporary barrier, and twin lasers. Those who liken the gameplay to Xevious are not wildly far off the mark. There is a seemingly infinite amount of levels, but all of them play largely the same and look that way as well. At the end of the stage is a boss that spews numerous projectiles and generally offers more challenge than the levels themselves. 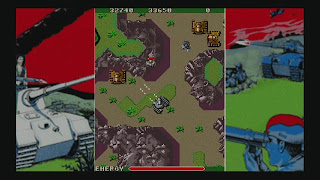 In terms of difficulty, Alpha Mission is only for the hardest of the hardcore players. If you get touched by an enemy or shot just once while unequipped, you respawn a needlessly long distance away from where you died. The options menu allows for settings like “Easy”, “3 Continues”, and “3 Lives”, but none of these on their own are going to help shooter fans who are less competent – or anyone, really. The ship is simply too vexing to manoeuvre because of the sluggish controls. The one slightly redeeming function is the ability to save data instantaneously and load it from the options menu, but most gamers – experienced or otherwise – aren’t going to want to put up with constantly using the menu.
There are bullet-hell games that offer less challenge, simply because they have superior character control or allow your character to respawn closer to where you died. Had Alpha Mission adopted either of these things, the experience would be significantly easier and more fun. Even shooter devotees will be flustered by having to learn the layout of levels and enemy patterns in order to be successful. There is a difference between a fair challenge and a good challenge, but Alpha Mission seems to have only a minimal grasp of this. 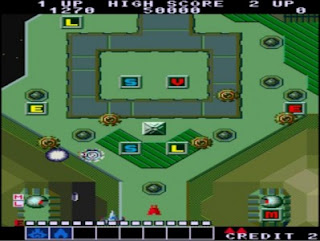 The game falls flat when it comes to being aurally appealing, even if there are some decent tunes. This is because you’re going to need to fire bullets constantly, which produces a less-than-charming noise that makes it cumbersome to hear the actual music. Even when you’ve stopped firing, there’s an endless bell-like sound that never ceases. These two sounds drone over the entire experience to the point where it may be a good choice to just turn off the volume because, sadly, there is no option to turn off only sound effects.

It’s important to note that this is the definitive arcade version, so the graphics are as good as they’ll ever be. In this case, they still remain relatively pleasing to the eye and visuals beyond the capabilities of the NES. The enemies and stage designs, though, are incredulously derivative and unoriginal. The action is focused in the centre of the screen and cannot be expanded to full size (in the PSP version at least). Other classic titles take up about 60-70 per cent of the screen in a square formation, but Alpha Mission goes for about 40 per cent in a vertical rectangular display. It’s understandable, but not a preferred viewing arrangement overall.
Despite my complaints, Alpha Mission might actually have a place in the collections of some truly devoted shooter fans. The problem is that these fans have so many vastly superior titles to choose from in the downloadable market when it comes to such a level of challenge. Even at $US2.99, it’s tough to recommend.
-Clark A

A big challenge to our loyal readers!