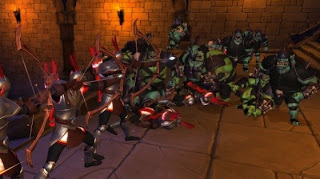 Here’s a bit of news we’ve been waiting for; Orcs Must Die! the upcoming tower defence/ action hybrid game now has a firm release date.

Developers Robot Entertainment have announced the game will be on XBLA on October 5, and Steam on October 12.

In this game players will be able to set traps to destroy the invading hordes of Orcs, and will also be able to personally deal with any that get through those traps. The full feature set, according to the press release, include:

· Play as the War Mage and defend 24 fortresses from an enraged mob of orcs and 11 other villainous monsters.
· Choose from a selection of 6 weapons and magic spells and 17 traps that hack, launch, flatten, gibletize, and incinerate your enemies.
· Upgrade your traps, spells and weapons to cater the game to your personal play style.
· Cleverly combine traps and spells for higher scores on the leaderboards.
· Expertly wield your wits and your weapons through the story-driven campaign and unlock a brutal “Nightmare” campaign.

It’s also worth noting that the game clearly doesn’t take itself too seriously. Check out some video footage from back in May here.