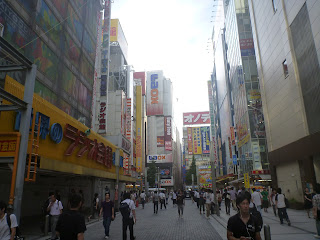 So I’ve just arrived back from a short trip to Japan, but a short trip that included some time in Akihabara, otherwise known as the Mecca for all things gaming, anime, manga and adult entertainment.

And, while the American gaming market might well be worth more money than the Japanese market in terms of sheer numbers, there’s one thing to remember: Akihabara has a heartbeat and a soul that no where else in America can replicate. 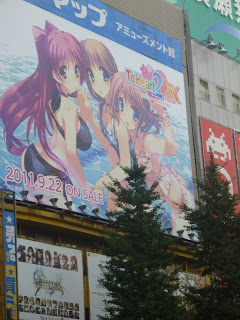 So let’s start with this picture from the outset: An advertisement for one of those weird “sexy” girls games; plastered over a prominent building down one of Akihabara’s main streets. It’s safe to say at this stage that we’re off to a good start; advertisements that would likely get the marketing company thrown in jail over in the good old US.

That first sight is backed up when I turned down a smaller alley to find this costume (and even better inside) shop proudly displaying its wares. What the camera doesn’t show you is that these wares extend for some eight floors upwards. Eight full floors of awesome Japanness. 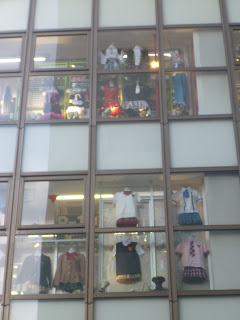 After that it was time for a cool, refreshing vendor machine drink (at half the price of any shop in Australia/ America, and with a far more interesting range on offer). Before heading off to do some proper shopping. Obviously taking photos of products in a shop is a no-no in Akihabara (as it is anywhere else in the world), but rest assured, the selection of games on offer is beyond amazing, and if you shop around, at a fraction of a price. Aside from new release games, it’s easy to find almost anything somewhere for under 2,000 yen ($20 value in the west).

The Koei fanboy in me squealed in delight when I discovered that in Japan, Koei’s popularity extends beyond the press; there are entire shelves dedicated exclusively to Tecmo Koei games. Naturally I picked up a bunch that will never get released in English on PS3 and DS, (Nobunaga’s Ambition, Samurai Warriors 3 Empires, a weird dating game thing and Romance of the Three Kingdoms). 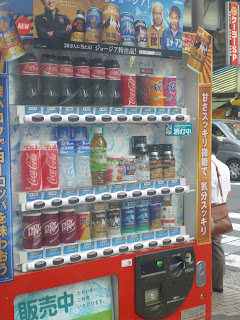 After that I found myself inundated with Dragon Quest stuff. The Dragon Quest Collection game on the Wii had just been released, and people were getting a heavy dose of retro awesome everywhere. From Dragon Quest business card holders to slimes everywhere, in every shop, it was a good time to be a Dragon Quest fan. People even got to sit on the slimes, thanks to advertising being sprayed directly on to the public seats.

And then my short journey to Akihabara had to come to an unfortunate close. I took the time to grab a couple of photos of the city itself (and for a nation in deep recession, it was certainly popular enough), as well as the tourist-requisite: Yodobashi Camera’s multiple stories of tech good brand names in bright colour.

The colours were a bit more muted this year compared to previous years: the Japanese government has mandated that businesses cut back on power use as the Fukushima Power Plant closure has left the country with a crippling lack of power. It was also a less pleasant shopping experience, as, despite 30 degree (Celsius) temperatures and humidity of almost 100 per cent, air conditioning was limited this year. Previously it had been in abundance. 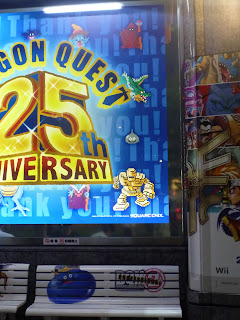 Despite those setbacks, Akihabara remains a truly unique part of Japan, by turns perverted, sexy, entertaining and intelligent. It’s an essential tourist destination for any self respecting gamer.

Please note: plenty more photos from Japan to come – stay tuned, but in the meantime enjoy the other photos from Akihabara.

And while you’re at it, why not pop on over to our forums to share your Japanese experiences? 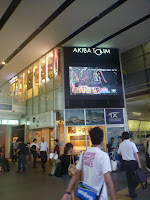 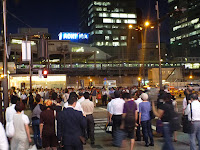 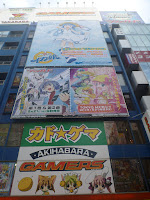 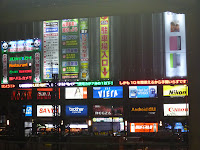 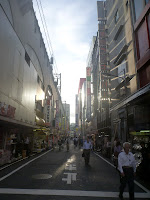 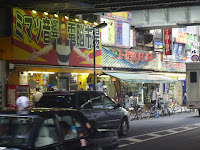 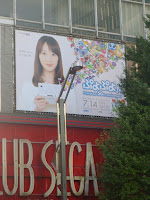 Stardash, a game inspired by the prospect of Nintendo on mobile devices