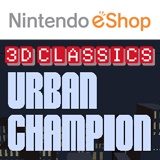 What happens in Fight Club, stays in Fight Club. It’s a pity for the publisher that Urban Champion wasn’t able to effect that rule on the people that play it, because if it could, this review won’t exist to (hopefully) dissuade people from buying the game.
It really is terrible. It resembles a fighting game, in that there are two people duking it out with one another. But, unlike a fighting game, there’s no skill involved in this game. There are only four button inputs – high and low punches, that can be either heavy and slow, or light and quick.
Where a good fighting game allows for precision and speed, the lag between button press and on-screen action in Urban Champion is so exaggerated that the game is simply clunky; there’s no more appropriate word to describe it.
There’s a couple of attempts to spice the action up, none of which are much fun. There’s the ability to dodge out of the way (but with the lag then it’s barely useful). Some idiots residing in the background will attempt to throw pots at the characters from time to time which, if they connect, will stun the fighter it hits for a moment. Then there’s a police car that will drive by ever so often, which will cause both fighters to run to opposite sides of the screen and look innocent. That last one is the most frustrating because there will be times when you’re a hair’s breadth from winning and get reset back to zero thanks to the idiot cop’s timing.
As for the game itself, the goal is simply to bludgeon the opponent off his side of the screen. Do that enough times and eventually the opponent will fall down a sewer pipe, and it’s on to the next level. 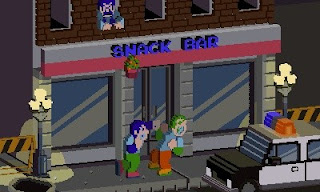 Except the next level isn’t really any more difficult than the previous level, and the enemy sprite and backgrounds are exactly the same. This is the entire single player game. Repeating this over, and over again. There’s very little challenge; the first time I played this game (and I’ve never played the original) I hit level 50. It took 40 minutes to do that, and in a perverse way this means the game has some longevity to it, but it nearly put me to sleep.
I’m a fighting game Luddite too, so I shudder to think how long this game could last someone with genuine skill.
On the plus side, there is a two player game, a nice change to Nintendo’s approach with retro games on the 3DS. It’s still not exactly fun, but hey, at least it’s there.
While it makes no sense that the effort went into turning this into a 3D classic, at least the effort pays dividends. The 3D effect in Urban Champion is impressive and makes the game look a bit like a 3D pop up book. The pixelated characters lack depth entirely, but the way they pop out from the background is impressive. 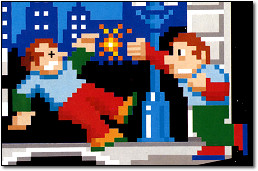 The game saves your best effort to date, but unlike Xevious, there’s no leaderboard. A leaderboard would have helped.

The timing of this release is terrible. Nintendo has finally started to sell some 3DS consoles, and people who log in to the eShop for the first time are going to see… this. Terrible move, and why the likes of this is getting remade while the good old NES games are being ignored is a true mystery.