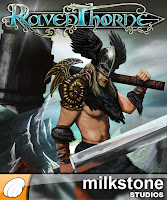 A part of the Summer Games Uprising on Xbox LIVE, Raventhorne follows the tale of a Viking warrior on a quest to aid the gods and stave off Ragnarok. Does this independent god of war sail on the wings of the Valkyries, or is he just a Midgarder at best?

The first thing that struck me when I fired up old Raventhorne was just how good the graphics are. Developer milkstone studios has basically crafted a storybook come to life. A very violent storybook, but a storybook nonetheless.

We follow the tale of the great warrior Raventhorne. He’s an almost unbeatable brute who, much to his chagrin, winds up in the netherworld. But the kicker is that he isn’t dead. It seems that Odin and the gods blessed him and his weapons in the hope that he could aid them at the end of all things. Now that the final battle has erupted and the universe is at stake- someone’s taken Raventhorne out of the game, dropped him off in Hell, and hopes to keep him there.

Of course, he ain’t having any of that and he sets off to reach Asgard and join the fight. Along the way, he meets some allies and some enemies – most of which are working towards their own agendas. Overall, the story is solid – only the writing, which sometimes can be a little amateurish, holds it back in places.

With an art style that looks like drawings moving on a page and animation to match, their work really stands out from the crowd. So many indie games have a ‘I made this in the basement’ look to them that it can be hard to take them seriously as a real solid title. In fact, and maybe this is just because of the age in which we live, if a game has a serious graphical deficiency I have a lot of trouble getting into it at all.

With that said, I had no problem enjoying my time with Raventhorne. This is a very pretty side-scroller that features big hand-drawn sprites, color splashed backdrops, and some truly beautiful special effects. The somewhat stilted animation just adds to things and makes the Paper Mario type look come alive. In short, I like.

Acoustically, you’ve got some nice tunes to slay by and some sfx that, although sparse, fit the bill just fine. But that’s another draw to this title, it looks like a suped-up SNES cart. Remember all those beat’em-up/ hack’n’slash’ games from the golden age of gaming? That’s what kept popping into my head with Raventhorne. It even plays like ’em!

It really is just a simple side-scroller at heart. Each stage has several levels of play (think metroidvania-lite) most of which you’ll visit just by playing through the given area- but other than that, this is a fairly left to right affair. That’s something that some might take issue with in an era of ‘non-linear’ play. I didn’t, but some might.

As far as controls go- you have a heavy attack, a light attack, magic, jump, and dash back or forward. But it does get deeper than that, a lot deeper. It’s a little deceptive actually since so much of the game is very straight forward and you might think that charging into the fight and button-mashing is the way to go. It isn’t.

In fact, you’re going to Valhalla pretty quickly if that’s all you’ve got. Combat with many of the monsters in the game can be pretty rough. The learning curve is a steep one unless you head into battle with the right approach. Block the weak attacks, dash away from the strong ones- and attack or use magik when you can. There’s a lot of strategy to be had here and as long as you’re cool with that, you’ll have fun with it.

Another big part of the combat system is your endurance. Attack too much and you’ll lose stamina (there’s a yellow bar at the side of the screen for it) lose too much and you’ll be a sitting duck while you recover. If this all sounds way too complex, you’re almost right. It gets to the point where there’s a lot to remember but never really goes over that point into daunting territory. Hard yes, but not impossible and you do get used to things after a while.

Raventhorne really could have been a full XBLA release. In fact, with a touch more polish, it could have been an A+ Arcade title. Here’s to hoping that milkstone has an Indie hit on its hands and that someone takes note. Lots of promise here, and a pretty good game too.