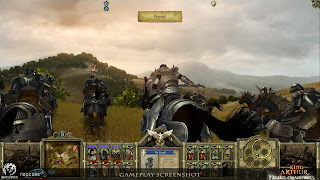 King Arthur: The Roleplaying Wargame has got to be one of the most underappreciated RTS games out there; it’s a lovingly-crafted RPG hybrid that is just different enough thanks to those fantasy elements to differentiate itself from the more realistic Total War games.

As we wait for the proper sequel, Paradox Interactive has released King Arthur – Fallen Companions to fill in some additional backstory of the alternative history, Celtic Wonderworld the budding franchise is rooted deep within. At $10, you’re only going to get so much content, but as a chance to revisit a vibrant world, and whet your appetite for the sequel, this is a safe investment.

In this game, you’ll play as three different characters – a noble knight out to rescue his loved one from the evil Red Knight, an Sidhe faerie looking for a way home, and a Pict shaman on a vision quest of sorts. That in itself is a truly great mix of characters. Though there’s not a huge amount of flesh to any of them, their unique characteristics and the setting they’re within provides ample opportunity to be both heroic, and dabble in the dark arts. More importantly, it allows you to play around with a huge range of units and strategies – more than a game with this relatively thin amount of content would suggest.

All three character paths need to be completed to participate in the final battle and bring the download to a close, but it’s that enjoyable to go through all three that this is a joy, rather than an act of repetition; all three have very different story arcs, anyway.

All three paths follow a similar structure though – move to the next “node” on the map, complete a Choose Your Own Adventure-style story sequence that asks you a number of moral and strategic questions (this is what passes as plot and character development in the game), and then participate in an epic battle on a huge battleground. There’s not that many battles or story sequences to play though, but the sheer scope of those means this is a multiple-hour game, and with five different difficulty levels there’s incentive to play through them multiple times. 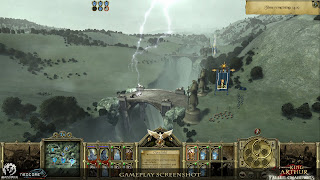 Much like the original King Arthur, there’s come character customisation to be done in upgrading special abilities and equipment, though the brevity in story arcs means this is a relatively restrictive process, and certainly those who played the original for hours upon hours will be somewhat disappointed in the perceived lack of depth. The same applies to the units you’ll call up and then send into battle, there’s just not the same depth in experience paths and equipment variety to be as engaging on the RPG level.

The combat is as satisfying as ever though. The battlegrounds are massive, and there are a number of approaches you can take to each battle. The level of control you have over the units is impressive, and those with leaders bring additional special abilities to the conflict, which offers some additional depth.

As with any other strategy game success requires making optimal use of your archers, soldiers and knights (or their otherworldly equivalents). And like other strategy games, there’s an elaborate rock-paper-scissors system crunching the numbers.

And like the ‘main’ King Arthur game, Fallen Companions looks incredible, with a powerful grasp of aesthetics, detailed environments and units that are a joy to see marching across the battlefield. The only downside to this whole package is, like the previous game, a problematic camera that is difficult to control and I do so hope is fixed in time for the sequel. Otherwise, this little background story is well worth $10, and could even serve as an introduction to the series to newcomers, as it’s cheaper, and doesn’t require playing through the previous game to understand.

Digitally Downloaded August special: the must-have games of the year (so far)