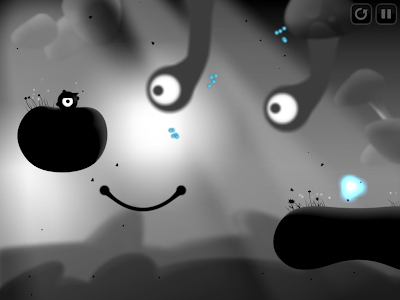 Chillingo’s newest find, Contre Jour, desperately wants you to believe it’s a work of art. The opening line of the game’s description in the Apple App Store suggests the game is “blurring the lines between games and interactive art…” but it’s not. I’ll address this misuse of ‘art’ as a marketing gimmick in a future opinion piece, but Contre Jour is not art. It’s an incredible game and anyone with an iPhone or iPad needs to pick it up, but there’s nothing remarkably intelligent about it.

If you take some of the basic ideas behind World of Goo, and then remove the colour from the visuals, you’re more or less at Contre Jour. It’s a physics-based puzzle game which tasks the player with navigating an adorable little black ball character through a living maze to end goal. Nothing we haven’t seen before, and even more traditionally, there are a couple of out-of-the way glowing blue balls along the way that need to be picked up for maximum points.

The touch screen is used to perform a massive number of interactions in Contre Jour. From deforming and raising terrain, to stretching and releasing rubber band-style platforms to launch the black ball into the air, to stretching special ropes that allow the ball to swing from side to side of the screen; the puzzles in this game require a good understanding of environment and the interaction between various objects, as well as a basic understanding of trajectories and reflections. It’s not necessarily easy, though there’s no great punishment for failure (just start the level again, and if you get really stuck, you can skip that level altogether) and a graceful learning curve keeps this title firmly in the “accessible” side of platformers. 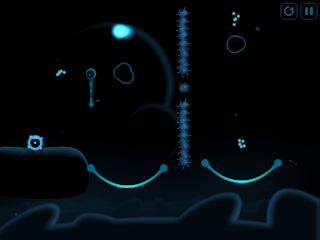 What sets this game above the World of Goo aesthetic that it clearly borrows so heavily from is the striking visual design, and incredible music score. This is one of those games that comes with a “best played with earphones” memo, and with good reason. The soundtrack from David Ari Leon (Marvel fans should recognise that name) is gentle, ambient and memorable. It’s worth owning this game just to listen to the music.

The visuals in static screenshots look like they’ve been pulled directly from Limbo. Unlike that game though, Contre Jour is not melancholic. The visuals bounce along happily with the main character, and the fully animated background often works with the interactive foreground in hugely charming ways. I lost count of the number of times a pair of disembodied eyes floating in the background joined forces with foreground objects like a piece of rope to create a weird Cheshire Cat-style face.

It’s rare that a game considers how the background can become more than an ambient part of a game by interacting with the foreground. Indeed, it’s the closest Contre Jour ever really comes to being truly “artistic.” Art is not about visual style, and boiling the components of Contre Jour down, it’s little more than a very competent puzzler.

As a very competent puzzler it’s easy to recommend, but university art students are going to be disappointed if they expected this will give them an excuse to play games under the guise of “study.”

Digitally Downloaded poll results #2: What is your preferred gaming device?