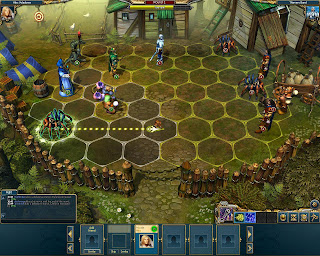 We all like strategy games here at Digitally Downloaded, so we’re still hanging out for the first Facebook game to really give us something to sink our teeth into, especially since Civilization World has been disappointing so far.

King’s Bounty: Legions is probably not that game, but it might be a decent start. For one thing, the game features hexes instead of squares to determine unit movement. Hexes are, as we all know, mana for real wargames.

Otherwise the game looks like a curious mix of Heroes of Might and Magic and CCG games. There are three factions to choose between, and each has its own set of units:

· Kingdom: Noble knights, scurvy pirates and powerful magicians are all part of this mighty class that fight for the king.
· Chaos: Necromancers, zombies and possessed bears will fall under players’ control after players conqure them in battle.
· Beasts: Giant serpents, dragonflies and monstrous plants unleash wicked attacks under players’ command.

Developers, Nival, promise more than 30 unit types and customisable armies.There’s an iOS version coming for people to play on the go, and Nival has a full range of new units, maps, quests and social elements in the future.