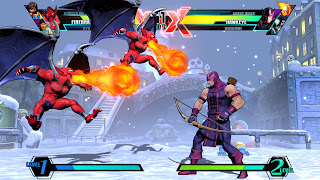 Scheduled for release in November, Ultimate Marvel VS Capcom 3 will add 12 new characters, new stages, new modes, and adjust balancing issues with the previous version. Due to the fact that the game was announced just 5 months after the release of the first, some fans anticipated that the characters would be available as DLC. Unfortunately, any hopes of a downloadable release were dashed today, by the statements of producer Ryoto Niitsuma in an interview:

“Right now, we’re only thinking about releasing a disc version. Given the development schedule, there wasn’t enough time to work out all of the details to release it as downloadable content, as well … there is so much data in the game it was easier to go this route.”


On the bright side, there’s always the chance the full game will show up for download on the PlayStation Store and Xbox Live. Should there be a third version of the popular fighter, it could very well go the route of Super Street Fighter IV: Arcade Edition – a disk release for newcomers and an affordable patch for owners of the previous iteration.
Share this

Use your iPhone as a light gun? Namco Bandai says yes