Dungeons and Dragons Daggerdale might just be what the venerable RPG needs to get some relevance back with video gamers, after years of weak or unnoticed releases. (See more screens and photos here)

It was announced back in December for XBLA, PlayStation Network and PC download. It’s both single player and multiplayer, and set in Daggerdale (see, the title fits!), one of the most renowned locations within the very popular Forgotten Realms setting – the same game world that the likes of Baldur’s Gate and Neverwinter Nights are set in.

So it has a recognisable setting, even for people that haven’t played the game in pen-and-paper or board game form. As part of such a well-regarded franchise, then, it won’t struggle the same market visibility problems that sometimes plague new IPs.

But what’s most exciting about the game is that, according to the website, it’s episodic (read why we think episodic gaming is excited here). Why is this exciting? Because Dungeons and Dragons (D & D) by its very nature is episodic. Before the franchise entered the world of video games, people would sit around a table to play D & D with friends and family, on a weekly or monthly basis – i.e. in episodes.

An episodic format is a different way to experience a game – as it is essentially a series of shorter stories with numerous cliff hangers. By contrast, a typical full length RPG is one big adventure with a more traditional story telling arc. In other words – compare the structure of a TV series to a feature-length film, and you’ll see a similar difference in basic structure. 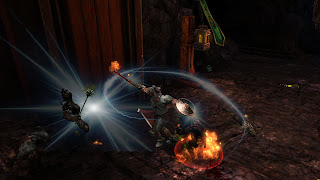 So Daggerdale should have a more pulp-fiction than epic atmosphere to it. As a result, by being episodic D & D Daggerdale stands to be one of the most “true” D & D experiences to date.

The gameplay itself also looks to be standing proud. Looking at the gameplay videos, it appears that Daggerdale has more than a few shades of Dragon Age: Origins within it. This is by no means a bad thing, especially mixed in with the D & D 4th Edition ruleset.

When it was first released, 4th Edition was controversial amongst pen and paper RPG gamers. It was eerily similar in style and theme to MMOs, and many dismissed it as an attempt to capitalise on the popular World of Warcraft. With time, though, it’s evolved into an elegant and entertaining system. It should also be a natural fit for video games, and the MMO-style should especially suit the multiplayer experience.

Developed by Bedlam entertainment, the first episode of the game will be released at some point this year. Given the D & D franchise has really fallen off the radar in the videogame industry, we have our fingers crossed that its return will be more a bang than a whimper.

Frozen Synapse; available now (and at 2 for the price of 1!)