Ever wonder what would happen if Rock Band met Super Puzzle Fighter then got doused with an RPG? Turns out you get Sequence. And if that sounds like way to many things mixed together to be any kind of a cohesive experience, you’d be right… But Sequence just seems to ‘work’. (Maybe it’s magic?) 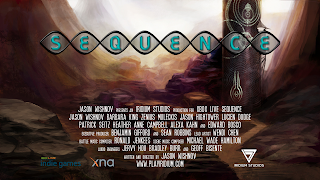 When our story starts out, we find that Ky, the player character, has been kidnapped and placed in a strange, vaguely Cthulhu-esque, tower that’s chock full of monsters. He’s got no clue how he got there and his only link to what’s going on is a smarmy female voice named Naia who interacts with him via intercom. Turns out that the tower is a testing ground and Ky has been chosen- in order to make it all the way to the top and escape, he’s got to master spell casting (among other things) and do battle with all manner of nasties.

Before I get too deep into this, I have to mention the writing and acting. While being far from top notch, it’s quite good. The script is snappy, full of pop references, and downright funny at times! It genuinely provides for some laugh out loud moments and is something I totally wasn’t expecting. Also, since you’re just basically just doing the same things over and over, Naia and Ky’s commentary keeps things relatively fresh and enjoyable.

And what are those things you’ll be doing over and over you ask? Fighting monsters in rhythmic fashion, of course. This is, first and foremost, a rhythm game. That’s where the ‘Rock Band’ portion of things comes in and it’s probably the best way to give you a feel for the mechanics without actually playing the game yourself.

The main play screen revolves around a set of three panels where you have to hit ‘gems’ that scroll down each field. You’ll flip back and forth between all three (mana, defense, and spells) in real time with gems sometimes appearing in all of them at once. As the gems fall, techno/house music plays that syncs up with them, just like notes in a music game- it’s like a split screen co-op game of RB that’s neither split screen nor co-op. Make sense? Now, when I heard gems were a part of things I thought this was going to look a lot like Bejeweled, but it turns out that the gems are basically just arrows that tell you which way to press on the directional pad (or the face buttons) in order to ‘strum’ them- no guitar necessary.

Here’s where Puzzle Fighter is invoked- as you’re hitting the gems, you’re actually fighting monsters. Ky appears on one side of the screen and a creature appears on the other. The center of the playing field houses a wheel that has a pair of sectors (you get more sectors as you play) to which spells can be assigned.

Hitting gems in the mana (mah-nah. One of the many ‘in-joke’ references in the game) field builds attack power, hitting them in the ‘spell’ field casts attack magic to work down your opponent’s HP- you can also cast healing magic and additional attack spells that you’ll pick up more along the way. The final field is defense- this is the representation for incoming assaults and hitting gems here will block for you. If that sounds overly complicated, it’s not. Later on in the game it can get a little frantic but you can always dial down the difficulty if it’s too ‘pro mode’ for you.

The point of all of this fighting is to collect items that you need to ‘synth’ into other stuff like weapons, spells, and keys. All of which will help you move on and do more rhythm fighting. Synthesizing items costs experience points though and messing up on the mini-game that you have to play in order to do it mean lost points (though you keep the items) This can, at times, result in a wee bit of the dreaded grinding. Dun, dun, duuuun!! But not too much.

I have to mention one of the biggest selling points of Sequence here- that’s the music and how it’s worked into the gameplay. It’s mostly good stuff but one word of warning- if you don’t have the sound turned up or are wearing headphones, you probably won’t hear the gem hitting cues. I played later on at night for a bit and had the volume turned down pretty low. As a result, I could just barely hear the soundtrack. It surprisingly turned out to not matter all that much as the music shockingly isn’t really a necessity for strumming the notes… uh… hitting the gems. It’s also almost exclusively techno-type stuff, of which I’m no fan.

Sequence’s graphics are open to debate and are probably the one glaring flaw in the game. It’s good looking enough for something that has pretty much no animation of any kind but, yeah, it has almost no animation of any kind. You basically get static screens of art, which are a cross between anime and ’90s comic books, to tell the tale. But I say it’s open to debate because this isn’t a game that you play for eye-melting graphic splendor- so it skates by, not really offending the player or affecting the game as a whole.

Overall, I liked Sequence a lot. It’s got some novel ideas and manages to smush together a load of genres that have very little business knowing each other. Don’t buy it for the graphics and maybe get your own music pumping (depending on your tastes), but definitely give Sequence a spin. If you like puzzle or rhythm games- it’s one of the most original takes on both that I’ve played in years.