Sony has just shown off some of its newest and coolest looking hardware, including a dual touch screen PC with PlayStation integration. 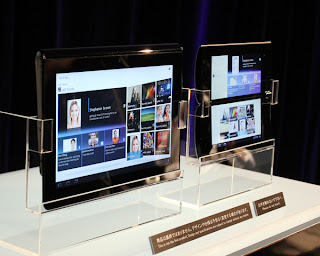 The new toys were shown off at an event called “Sony IT Mobile Meeting.” The one on the right is our new “must have gadget” – even despite its scare details. What we do know is it is called the Sony Tablet S2 (the other one is called the Sony Tablet S1, and is another one of those iPad competitors), will fit in the pocket, and it will play Android 3.0 and PlayStation One games (the same PlayStation suite of games available on the Sony Xperia Play, we guess).

Will it be uncomfortable playing PlayStation games on a virtual controller? Perhaps, but the people at the event seemed to get along with it well enough.

Or, for some video of it in action:

Opinion: Forget the NGP, the Sony Tablet S2 is our next Sony handheld