Chillingo, now part of EA, has steadily built itself a reputation for offering a high quality mix of casual and more serious iPhone and iPad games. Etolis Arena is one of Chillingo’s more serious releases, but it’s also one of its weaker titles. 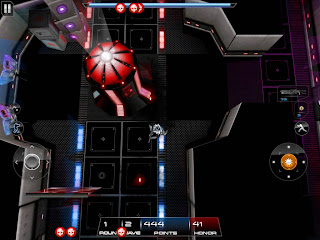 A bare-bones plot sets the premise – a marine-style hero has been dumped in an arena, and must fight through wave after wave of enemies until he perishes. There are six such arenas available – three at the outset, three to unlock by accumulating points through the game. There’s not a huge variety in the levels, but they do suit the “arena” set-up well.
The game itself plays from a semi top-down perspective, similar to the likes of the two Alien Breed games. At its heart, Etolis Arena is a dual-stick shooter/ horde survival game, where you’ll get increasingly powerful weapons and gear to deal with increasingly powerful waves of enemies.
It’s a simple premise, and when it works in games, it’s great fun. Unfortunately, Etolis Arena in execution is a bit too clunky to be much fun.
The problems begin in the default settings. The camera is set to “dynamic,” which actually means “jerky, motion-sickness inducing active camera” that makes aiming difficult. The static camera angle is better (it’s playable, at least), so the first point of call when turning on this game is heading into the settings.
Auto-aim is also switched on by default, but given the slow movement speed of the hero and the imprecise nature of the auto-aim, that’s best turned off, too.
But even with optimal settings, the game is a mess. Enemy design is dull, and often the various robots and ugly humanoids blend into the backgrounds right up to the point where they zap you. The viewing screen is also too small. While there is a radar system in place to show where the enemies are coming from, they move with such speed that there’s no real time to react before they’re literally sitting right on top of the “hero.”
The virtual buttons placed around the edges of the screen are small and difficult to press on the fly. The two virtual thumbsticks for movement and shooting also tend to suffer some lag and stick, and it’ll take a great deal of patience (that a game of this calibre just isn’t work) before you’ll stop getting stuck against walls or firing in the wrong direction. 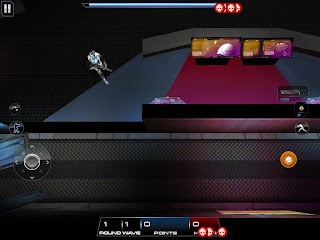 Beyond the gameplay, the game is also quite ugly. Messy neon colours and stuttering animations don’t make for a pleasant experience on the eyes. Sound effects lack impact, and music is so generic it is at least forgettable.
There’s also no multiplayer – a real shame in a genre that thrives on co-op. It’ll take a good investment of time to unlock everything, but again, a game of this calibre isn’t worth that time investment.
It’s difficult to be too critical of this game, given its very low asking price, but even amongst low-priced dual stick shooters, there are better examples of Etolis Arena. Chillingo is a publisher with some serious pedigree, though, so the good news is the next release will likely be a must-have.