Taking on Shinra will never get old.

Crisis Core is one of the better efforts to take a beloved classic video game (in this case, Final Fantasy VII) and build on it. In this case, it’s a prequel. It’s a depiction of the leadup to the legendary events that feature Cloud and his team, and is so compelling that it’s as essential as the original game. Now it has been remastered to an incredibly high level of fidelity.

You wouldn’t know that Crisis Core was originally a PSP title at a quick glance. Square Enix has done everything to take that relatively humble handheld game and make it something console-quality. From the detail in the character models, to the environments and incredible summons attacks, the game looks incredible on the big TV via the PlayStation 5. Unfortunately, its heritage becomes clear once you get into the thick of the gameplay. For one thing, levels are relatively small and broken up into tiny chunks with loading times in between them. For another, quests are chosen from a menu and the side-quests, in particular, can be completed in just a minute or two. However, while this means the experience isn’t as seamless as you’d expect for a modern “blockbuster” game, it is still designed well and provides a good time, given that the main reason you’re here is the narrative anyway.

Crisis Core has an absolutely incredible narrative, for something that is effectively an example of fan service. It’s an opportunity to meet familiar (favourite) faces, in familiar locations, and get a bit more of their character spelled out for you. It’s wrapped up in a lot of the science fiction/fantasy blend that powered Final Fantasy VII itself, and the game is so heavily reliant on the source material that you really need to have played it first (of course, who hasn’t played FFVII that would be interested in a game like Crisis Core?). But within that meandering tale of clones and evil corporations is something really human. The protagonist, Zack, has a story that bites deep and wraps in such a way that explains why Cloud and Aerith never talk about him in FFVII (he meets both in this game), and will further deepen your understanding of the true level of depravity that Shinra represents. Without giving too much away, if you know the story of Benkei from Japanese history, then there’s a pretty explicit reference to that in Crisis Core, and it’s quite possibly the most moved I’ve ever been, across every title that bears the “Final Fantasy” name. It’s some truly devastating, poignant stuff. 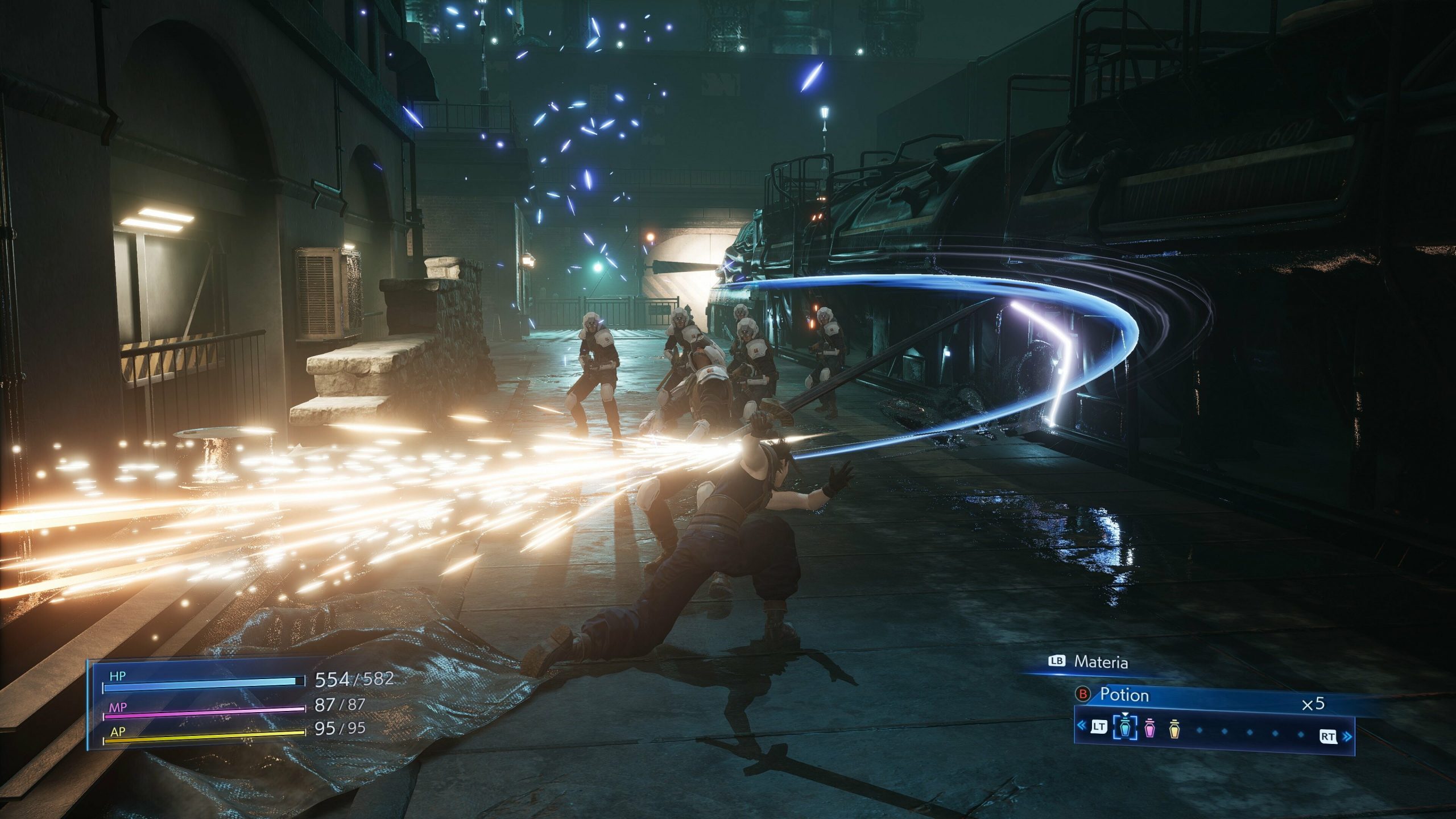 This narrative also pulls no punches in taking a hard look at warfare, scientific overreach, and builds on the key themes of Final Fantasy VII itself. It’s perhaps a little less subtle about it, but then it’s a relatively brief project compared with the base game, and is also more focused, with fewer opportunities for digressions on account of the limitations of the platform that it was originally designed for. In other words, Crisis Core is a “get in and get out” approach to JRPGs, at around 20 hours long, and with everything it is trying to convey, the writers had no choice but to go intense from the opening moments.

From start to finish what cuts through the intensity and makes Crisis Core something more relatable than a dirge is the protagonist. Zack represents the Final Fantasy leading male archetype at its best; he’s a touch silly and his childlike desire to be seen as a hero will, initially, make you laugh at him more than with him. However, it doesn’t take long for his warmth of spirit to win you over, and his relative simplicity and honesty in the face of all the duplicity raging around him make his arc touching and tender. An excellent set of performances back this up – this really is a cut above any other PSP game you might have played – and thanks to the detailed remastered graphics, the remaster feels like the original vision has finally been matched with the technical quality to deliver on it.

Square Enix has made a host of changes to the way Crisis Core plays. Unfortunately, I can’t really comment on those because I’ve never actually played the original, however, this PlayStation 5 version has a pacey action combat system with just enough room to manoeuvre with traditional Final Fantasy tactics. You can equip several different Materia (a.k.a. magic) to hit enemies in their weak points, and combined with the gauntlet of familiar faces that you’ll face it does feel like a Final Fantasy game to play. 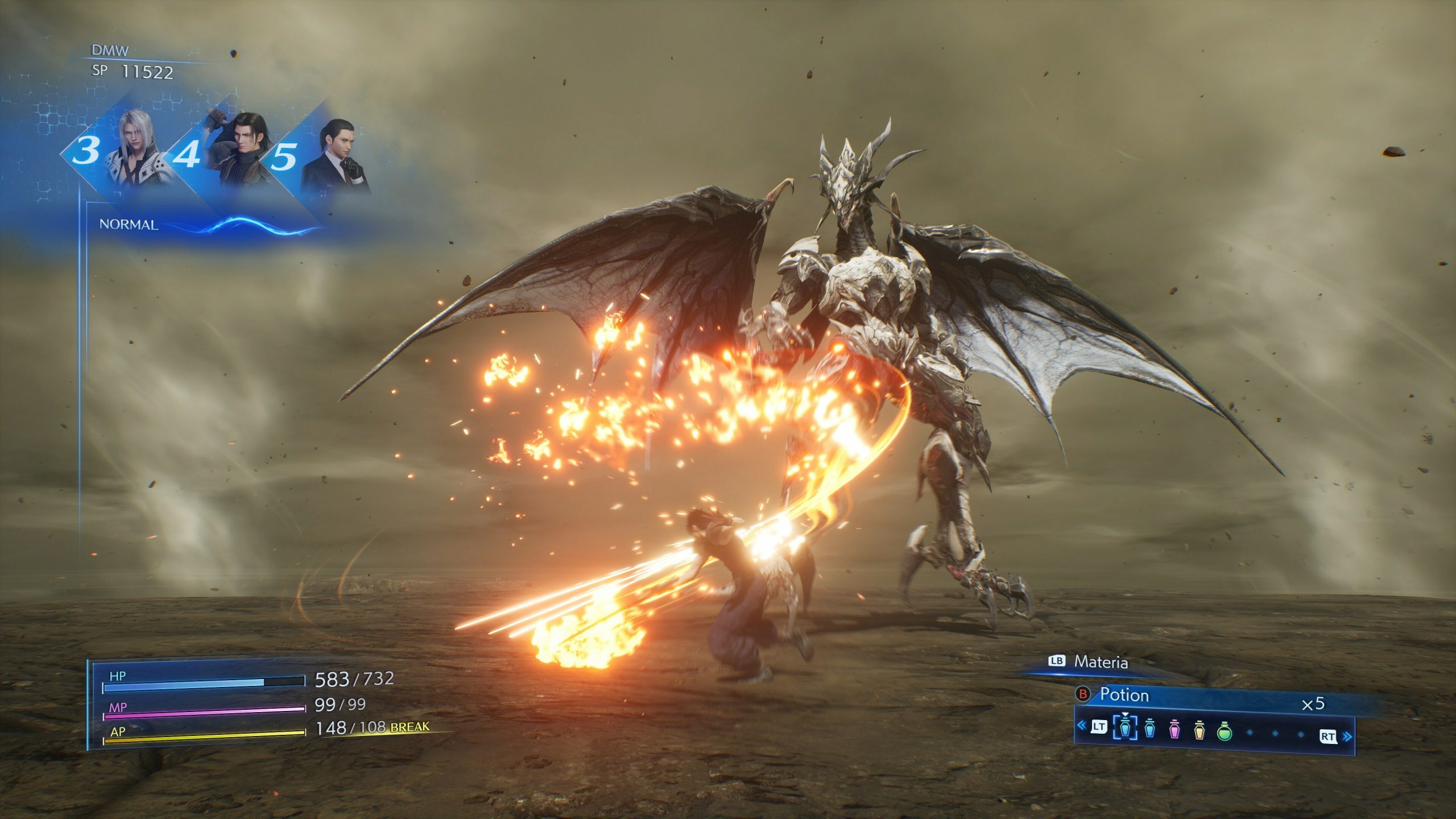 What is really interesting is the slot machine system. As you battle your way through the hordes, a slot machine chugs along in the upper corner. You don’t really need to pay attention to this, as it’s automated, but essentially all your most powerful attacks, and even the ability to level up, are tied into this feature. When the slots align you’ll “earn” one of a number of different effects, ranging from the relatively humble (the ability to cast unlimited magic without spending MP) right through to abilities that will all but finish the battle for you (the summons).

Now I must admit that I played through the entire game without quite understanding if I was able to do anything to stack the odds that the slot machine results would turn in my favour. I basically saw this system as completely random, and played with it with that in mind. In fact, due to the speed of the combat I never even directly looked at the slots ticking over. I simply took advantage of the effects when a prompt told me that I’d been “lucky” in some way. To the way that I played, therefore, it was an entirely backgrounded system.

What I loved about it was how random it was. I could not rely on using summons to get through tough battles, because I had no idea if I was going to get a summon at any point in the battle. I needed to rely on my ability to use standard attacks and abilities, and roll with the punches as far as the good stuff goes. To me, that cuts to the very core of the RPG experience. It was the closest that Final Fantasy has ever come to reminding me of the thrill of Dungeons & Dragons, as you wade into battle with the ancient red dragon and are hoping for – but not counting on and trying to build a strategy that doesn’t rely on – some natural 20s. 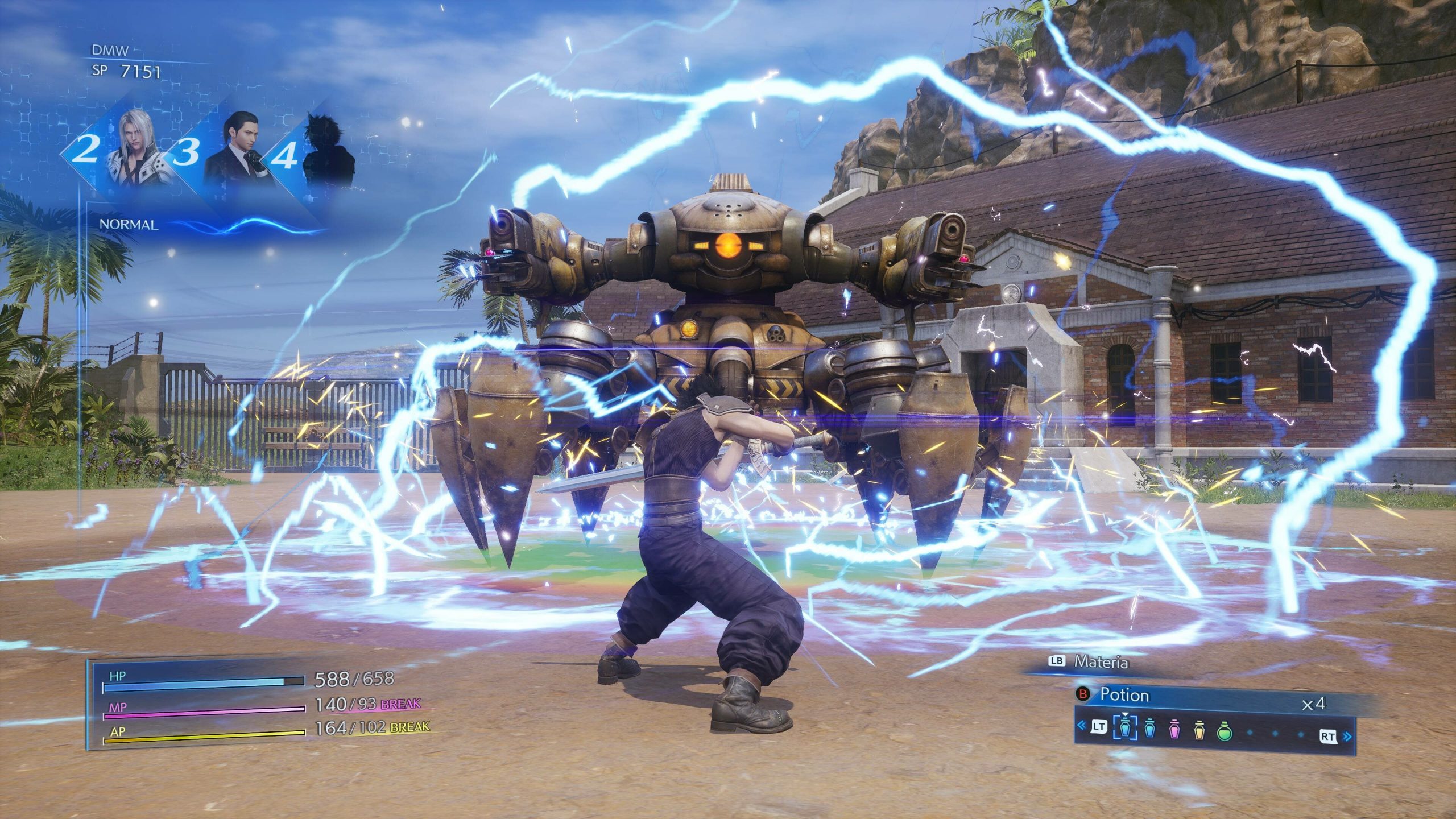 I can see that this system would disappoint some people. The tradeoff for putting the best stuff behind a randomised system is that you take agency and, to an extent, strategy away from the player. But in too many JRPGs you end up developing a system that works (i.e. a sequence of attacks and abilities that will get you through combat with maximum efficiency) and then spam that on repeat for much of the game. Crisis Core here forces you to be more creative and use the full gamut of abilities available to you, and I’m now disappointed that no one has ever tried to further iterate on this system.

I can see now why Crisis Core is considered one of the best PSP titles and one of the finest Final Fantasy games ever made. It has been “blown up” and remastered for the PlayStation 5 to the point that it looks and feels like a native title, and has a rich and emotionally impactful narrative that, being entirely honest here, was well beyond what I was expecting. This is another feather in the cap for Square Enix, which has had one of its finest years ever.