As anyone that follows me on Twitter knows, it’s not just that I just have an interest in politics, but I’m also quite certain that politics in the world is fundamentally broken. In most countries around the world, the political sphere is dominated by two or three neoliberal parties that circle around the same drain while yelling pretty words at one another, and when the population has finally had enough of this, the way they snap and let their anger be known tends to be in support of the Mussolini aspirants.

My avatar on Twitter is the site’s mascot in homage to Che Guevara. The reaction that tends to draw out of people amuses me. I sit on the very far left end of the spectrum, and I’m quite firm on that, having spent many years watching the political environment with increasing distress.

Anyhow, the point of all the above is that SuperPower 3 should have been a game I got right into as it is very much my kind of thing. It’s been almost 20 years since the last SuperPower, but its principle remains the same. You take control over virtually any nation on earth, and manage its growth and development over time. Note, however, that this isn’t a strategy game. It is possible to get into a war, but that’s not the focus of it and the game is to something like Civilization what Football Manager is to FIFA. It’s a spreadsheet management version of the event, rather than the more viscerally, immediately entertaining take. 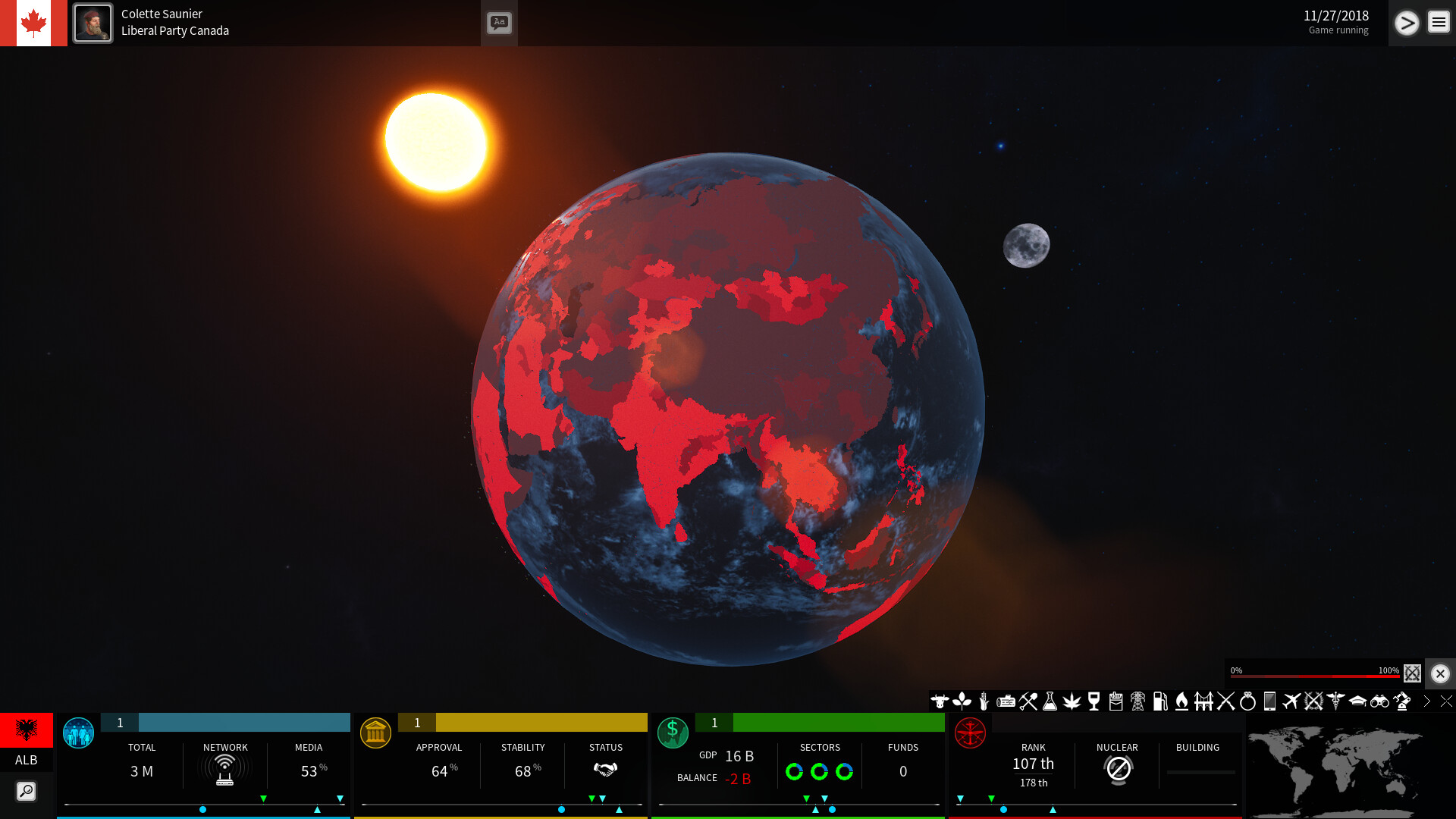 What SuperPower 3 actually focuses on is managing your nation’s economic fundamentals, as well as its domestic policy, international relations, and military development. Unfortunately, it’s so underwhelming at all of these areas that I’m halfway inclined to believe that it was secretly developed by a government somewhere to make anyone that has revolutionary ideas so bored that they can’t be bothered any longer.

Take economics, for example. I started out my quest for global dominance by doing the right thing and nationalising just about everything I could. Then I invested in all those industries, while also making sure that I wasn’t creating too much unemployment or excess stuff. Aside from an occasional click here and there, though, all I was really doing was watching a bunch of numbers tick over in super-slow motion, and then spending the rest of my time in the foreign trade menus trying to strike deals with countries around the world to buy my nation’s stuff. Admittedly that is a pretty authentic recreation of the actual role that a government plays in an economy, but it’s also quite dull.

Domestically you’re also surprisingly limited in what you can do. You can choose to abolish democracy if you want, and issue restrictions on the press, and… there’s not a lot more that you can do there, either. Perhaps this game is, ultimately, a commentary on how a government’s role in a nation is far less substantial than many of us really comprehend. That might well be your takeaway from it, but in practice SuperPower 3 really is about making the one big decision and then watching as the numbers crunch away for an hour and the full implications of what you’re doing are felt. That’s just simply not a game you want to play. 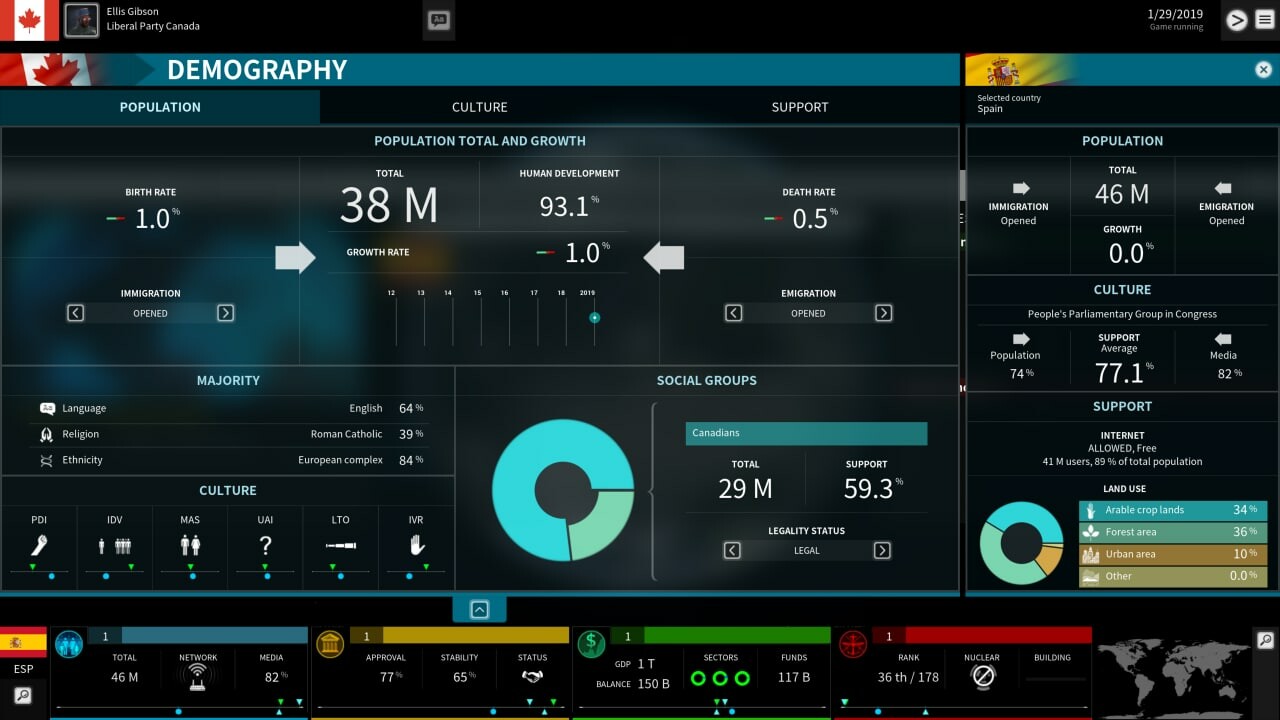 What the game does do well is highlight the inherent advantages that some nations have over others. If you choose to control an impoverished nation, lacking in infrastructure or natural resources, your experience is going to be vastly different to controlling a resource-rich nation with advanced economies like America or Australia. Building international relations as a pariah state under an authoritarian regime is difficult thanks to all the trade embargoes that have been slapped on you, as trade is one of the most effective ways of building a strong relationship with another country. Military conflict is far more likely for some nations than others. There are a lot of different challenges that you can set yourself while playing SuperPower 3, and many nations do have an inherent advantage over others. It’s a fairly good approximation of reality in that way.

But it is lacking a soul and an understanding of the human impact of politics. Nationalising Australia’s natural resources industry should have been something more dramatic than a single click on my mouse button and a long-term decline of my popularity from 60 per cent to 59 per cent (if the spreadsheet even decided that this was the reason for the 1 per cent decline). The decision to nationalise resources in this country would be truly explosive and almost certainly lead to hardcore political destabilisation. I’d still do it, but if I’m going to bring revolutionary ideas to the table in a game like this I’d like to see some acknowledgement that I’m doing something significant.

SuperPower 3 comes across as far too dry and accommodating for its own good. The superpowers aren’t really able to flex their regional influence and power, beyond outright invasions, and so foreign diplomacy lacks the tension that is so core to the existence of Latin American and African nations. Elections, which are such a critical part of political life, aren’t much more than a case of “are you popular enough? Great, you win!” The game does, vaguely, track the left-wing/right-wing pendulum that most nations go through, but that’s little more than a notification that pops up on the screen from time to time. It certainly doesn’t consider the destabilising implications of extremist leaders and what they do to a nation. 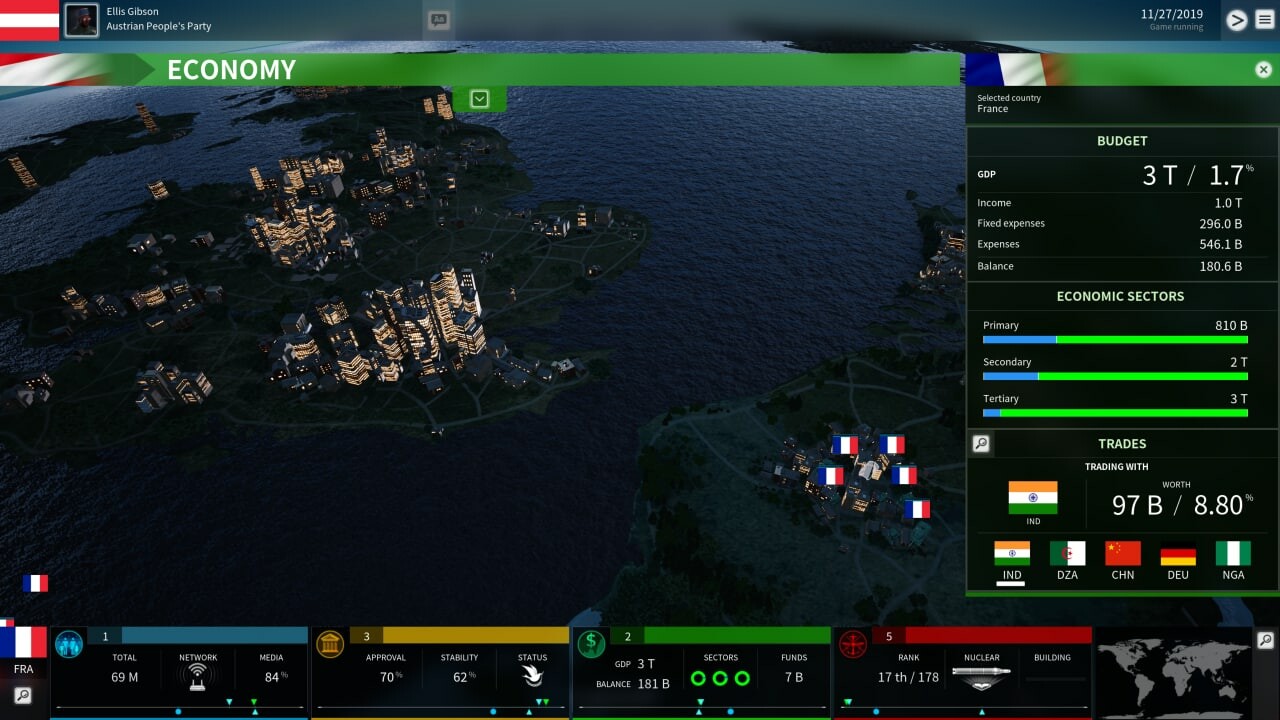 There are plenty of scenarios to play through, in addition to the main sandbox mode. However, those scenarios aren’t really a variation on the base game. Instead, scenarios give you a pretty basic checklist of targets to hit when playing as a specific nation, so they really simply guide your hand with regards to what buttons to press. Need to hit a certain relationship level with another nation? Keep giving them money and inking trade deals and you’ll get there. Need to build up a certain sector? Just keep throwing money at it. By giving you targets, these scenarios do a decent job of teaching you how the various systems work, which is particularly important with SuperPower 3 given that it doesn’t have tutorials or decent guides in-game.

It really does say a lot about how simple SuperPower 3 really is that you can putter around and figure it all out for yourself…  but it also highlights just how simplistic the game is that it’s a global-scale grand strategy title that it’s the one example of the genre that didn’t really need a tutorial.

SuperPower 3 does allow you to lead any nation on the planet in any way that you might like to. Unfortunately, while the game is only as exciting as a pile of spreadsheets, it’s nowhere near deep enough to feel like a genuine political simulator. It needed more fireworks and a sense that the decisions that you were making were really impacting on the nation and, once you were powerful enough, international balance. As it stands, all that’s really on offer is a bunch of numbers endlessly ticking over.

A platformer where you control… the platforms?