It took a little over 15 years to get Kamiwaza localised in the west, and while this is an incredible niche title, it’s well worth trying. To this day it comes across as overly ambitious to what developer, Acquire, perhaps had the resources to deliver, but this game and its developers did not die wondering.

Stories of gentleman thieves or noble thieves feature across virtually every culture. Everyone knows the story of Robin Hood, after all, and Arsene Lupin, and in Japan there is Goemon. They’re rebels, yes, and everyone loves the stories of people that sit outside of the law. But there’s more to it than that too. These individuals targetted the wealthy in either a crusade to support the poor, or as revenge for the way that the wealthy have ruined their own lives, and that resistance against power makes these stories downright noble and revolutionary.

The hero at the centre of Kamiwaza finds himself somewhat reluctantly returning to a life of noble thievery. He tried to give it up (after the group he ran with started to become dangerously violent and therefore no longer morally justified in their thievery). Unfortunately, his adopted daughter is struck down with a malady that needs daily care… and the cost of medicine is well beyond his means through honest work. So he dons his disguise bandana again, picks up his loot sack, and ends up once again embroiled in a whole lot of drama that he never wanted to see again. 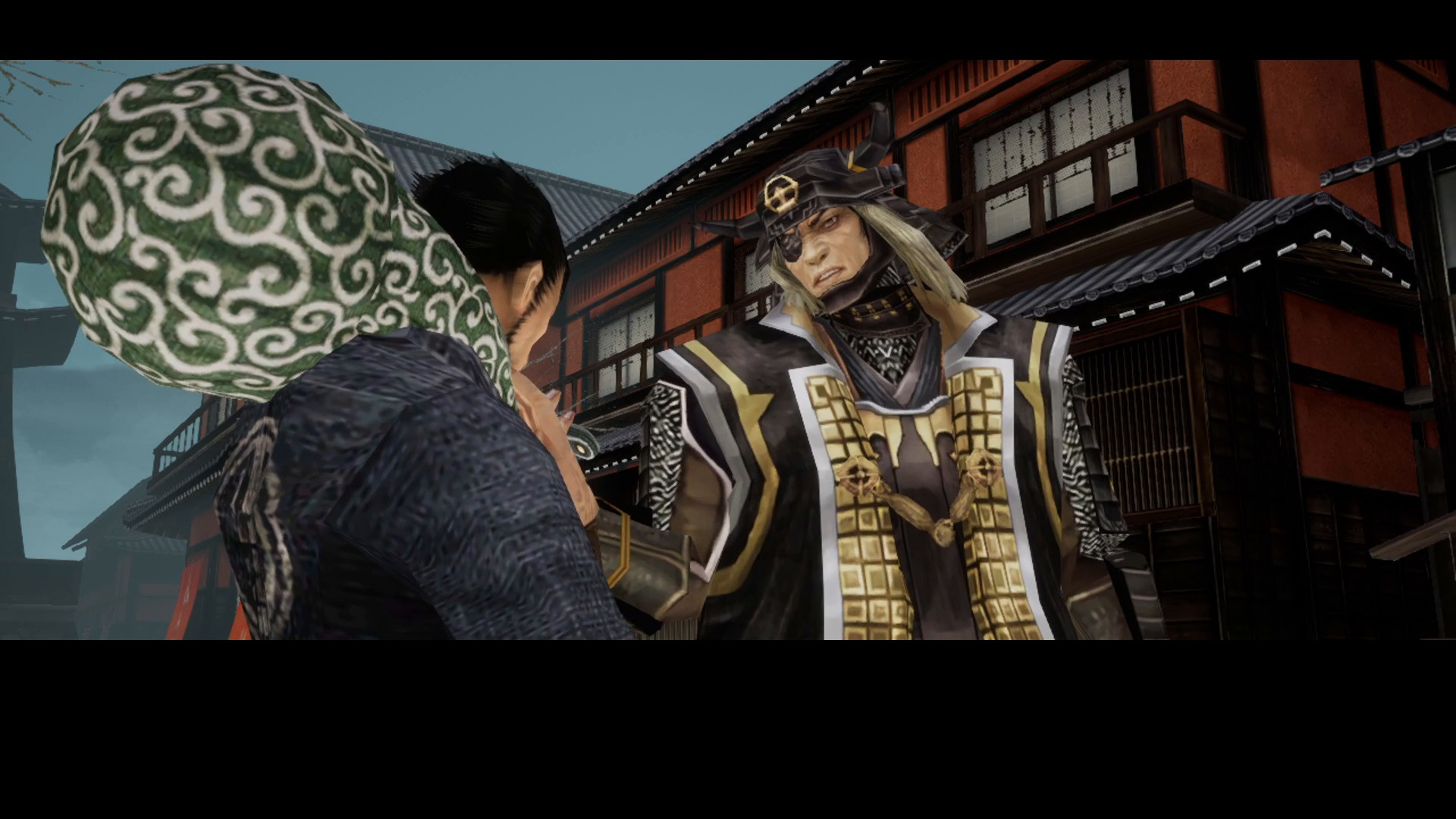 That could have been the background for a pretty sobering narrative. In fact, many years later another developer would release Pandora’s Tower – another game about doing dubious things to try and secure a daily cure for an innocent – and it was very sobering. However, Kamiwaza was developed by the same company as the Way of the Samurai series, and was every bit as determined to be surreally entertaining at every opportunity. From the weird rock music that (deliberately) clashes with the traditional Japanese aesthetics, to the oddball and (deliberately) awkward animations of the various characters, Kamiwaza hides a lot of its weaknesses, cleverly, behind humour.

Enemy AI is dumb, for example, and the game’s multitude of systems gives you plenty to exploit your way through packed areas. This is intentional – the scoring system requires that you actually venture into the enemy’s sight ranges, pull off a funky trick, and swipe their stuff from right under their noses. It’s fun, but a far cry away from the taut, tense stealth experiences that we’re used to. By embracing silly humour and a kind of surrealistic style, the developers managed to deliver a stealth game that didn’t require that they deliver a particularly something that could rival the competence of, say, Metal Gear Solid’s stealth action. Anyone who has played a Way of the Samurai game knows that Acquire’s developers pulled similar tricks there to get away with their inability to compete with the big guns when it came to “open world games.”

If that last paragraph wasn’t clear enough: Kamiwaza isn’t a game that’s necessarily easy to get along with. It’s not particularly intuitive in its systems, and if the AI of the enemies being poor wasn’t enough of an issue in delivering what is traditionally expected from a stealth action game, an irritating and poorly implemented camera system certainly will turn some off. By conventional standards, this is not a good game. 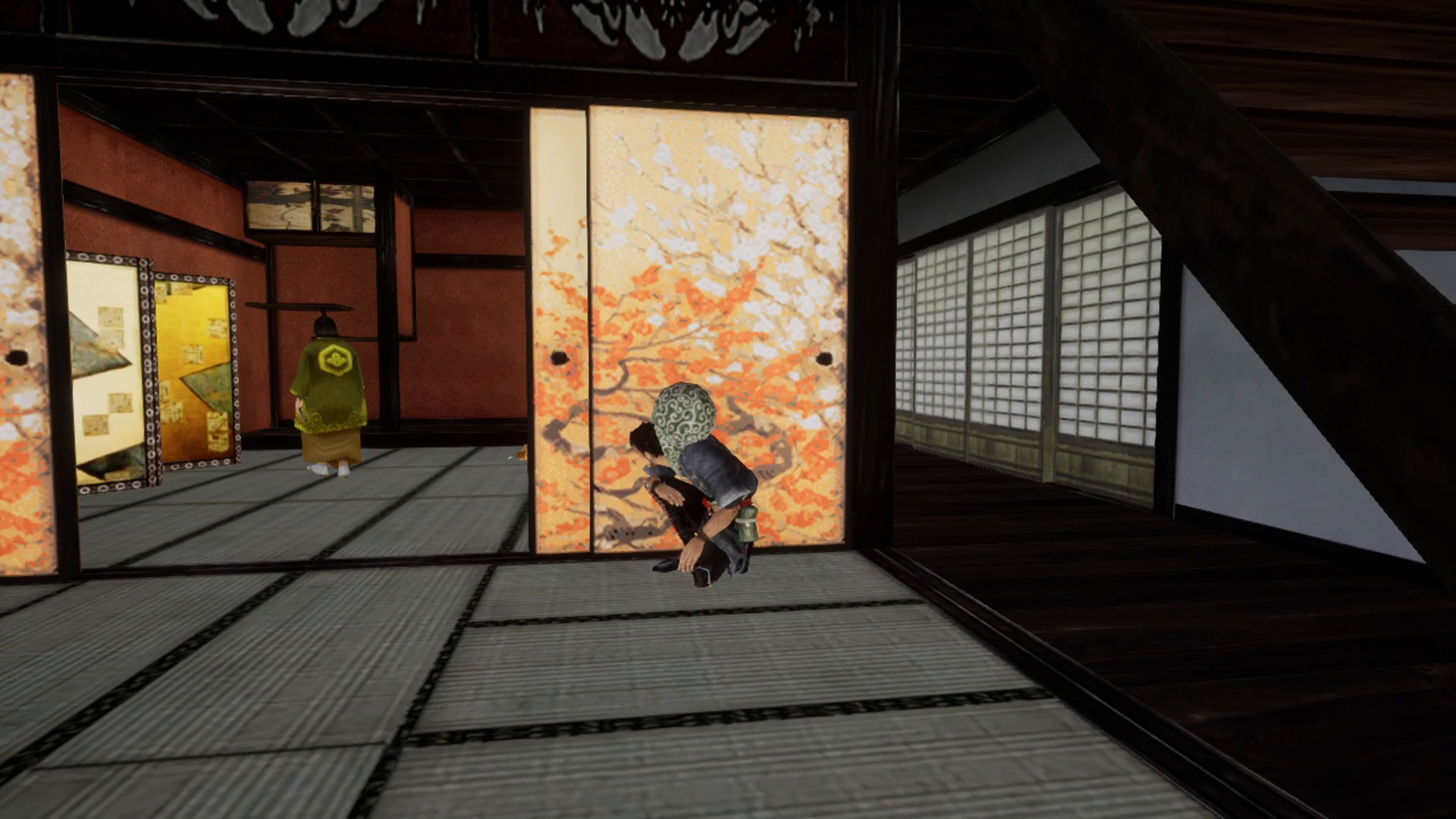 And yet, it’s a very good game. The oddball, dry, and surrealistic humour means it’s difficult to get frustrated by the game’s irritating elements, and because it’s impossible to predict just where things will go next, the gleeful way it throws curveballs in makes it very easy to stay invested in the adventure for the entire run-time.

There’s also a lot of it that’s either well-made or, at least, creatively interesting. The fact that you need to continue to deliver daily medicines and health items to the daughter forces you to work fast and, while that can become a bit of a grind, ensures that there’s always a tension that will encourage you to take some risks to try and get the big scores. There are also persistent elements to deal with, which add fun continuity to the story. The more you get spotted mid-exploit, the higher the alert level in the village and surrounding areas where you ply your trade, and unlike a GTA, that reputation doesn’t go away by hiding for a few seconds. Making good use of disguises is an important part of Kamiwaza, though it too is by no means a guarantee of safety.

There are also branching narrative pathways based on your actions in-game, and multiple endings (not all of them good). While Kamiwaza doesn’t have hour-long cut scenes like an MGS, it is a fundamentally narrative-driven experience and the relationship between the father and his adopted daughter comes across as genuine. Some of the decisions that you’ll need to make, and the way the plot can pan out, can be surprisingly hard-hitting for a game that often elicits laughs for how silly it can be. 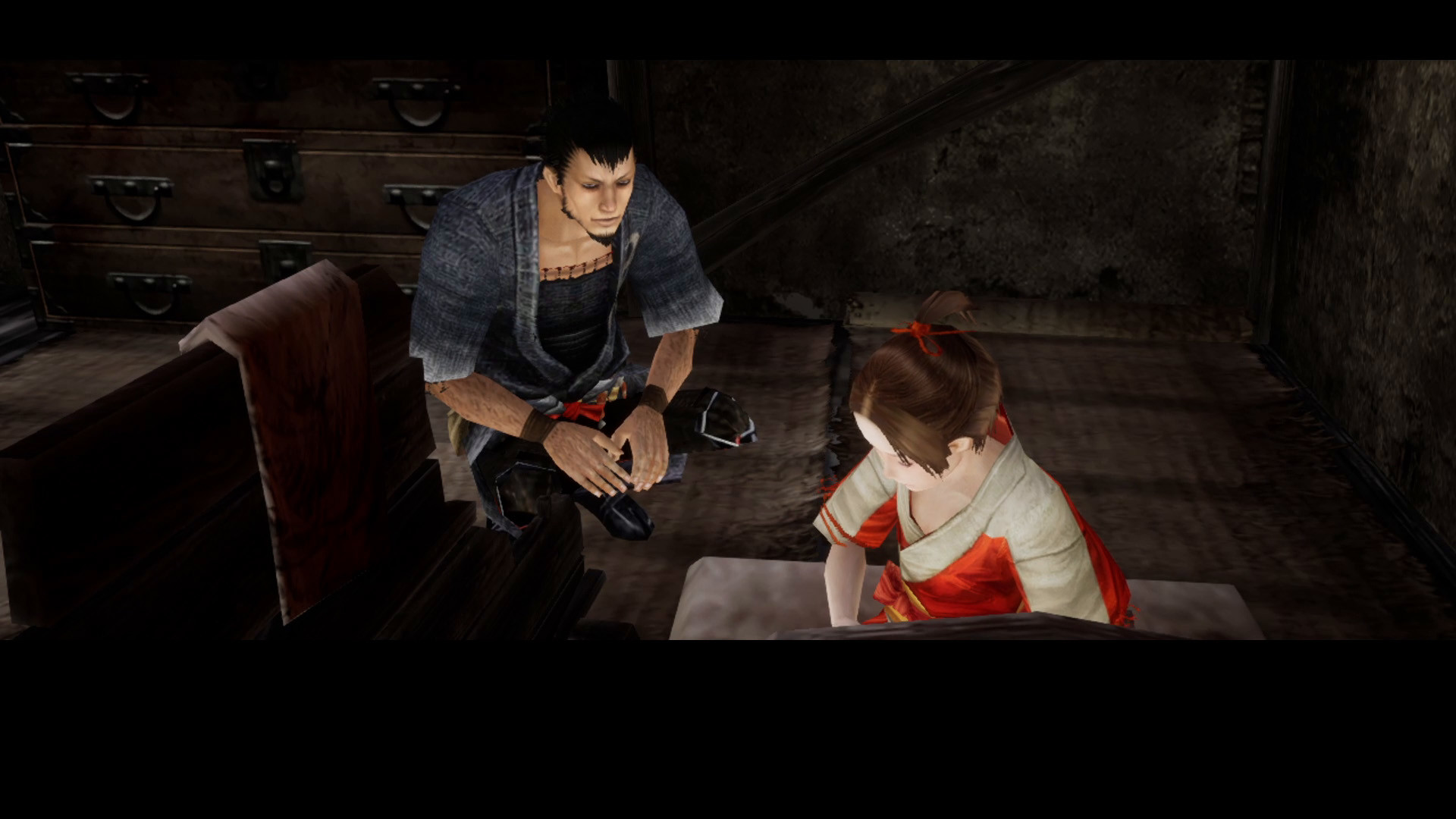 One final quality I love about Kamiwaza is that there’s no violent option. You can attack enemies by slapping them about until they’re knocked out, though they’re not going to have any qualms about using their weapons on you, and even if you do knock them out they’ll wake up far too quickly. You’re nimble and can duck and dive out of the way stylishly, but there’s no backstabbing or neck-snapping. Exactly what you’d expect from a gentleman thief.

Kamiwaza is, no doubt, going to be written up as a “product of its times,” but I think that writing it off like that is missing the mark a little. It’s true that even in this “remastered” state it looks like a PS2 game (excellent aesthetics, but primitive technical execution). However, Kamiwaza is an ambitious and boundary-pushing game. By turns surrealistic and funny, sincere and layered, it’s one of the most eclectic and interesting titles you’ll play this year, and it is a very good thing that it has finally been localised. You’ll understand why it never managed to influence too many other developers, but without fascinating and experimental things like this, we’d live in a very boring world.

We stream The Battle Of Polytopia – It’s Civilization in an hour!