The game wouldn't let me play as Marquis de Sade :-(.

I did not expect that Steelrising would be a Soulslike. I don’t know if I’d just missed that bit of news in the initial announcement (I then went out of my way to avoid learning anything about this game prior to when I started playing it), or if the developer and publisher had deliberately kept that on the down-low, but that’s what the game is, and that was just not what I expected. In a good way, though. Spiders might not have the team to create a thing of the scope of Elden Ring, but this is a massively impressive game nonetheless.

Spiders started out as a scrappy little RPG developer with creative ambition in spades, but limited technical ability. Early efforts from the team, such as Of Orcs and Men, Mars: War Logs, and Bound By Flame, all had their merits, but were also let down in application by clumsy gameplay and budgetary limitations. But, then, the team started to figure itself out, and The Technomancer was a vast improvement that stamped Spiders on the map as one to watch. Then came GreedFall, a game that transcends the “Eurotrash” that people would generally attribute to Spiders to be a genuinely top-tier RPG. GreedFall made Spiders one of my favourite European developers.

I expected that Steelrising would continue to build on the work that Spiders had done in virtually every title previous. The concept was right for a “GreedFall-like” too. On the eve of the French Revolution, Marie Antionette, grieving for the loss of her children and effectively imprisoned in a manor on the outskirts of the city, sends a trusted ally on a mission to find out what’s going on. The catch is that the ally is actually an automaton, and so too are the enemies, because the world of Steelrising is a harrowing steampunk vision in which the conflict is being played out through machines. Once you start playing it you realise it very much works as a soulslike too. It’s a masterful recreation of a historically-authentic Paris, but it’s an alternative history one, and the automatons are incredibly effective at making the world seem sinisterly dehumanised. As the streets are ruled over by marching, hostile machines, the humans huddle away in their homes – Bloodborne-style – desperately hoping to avoid notice. 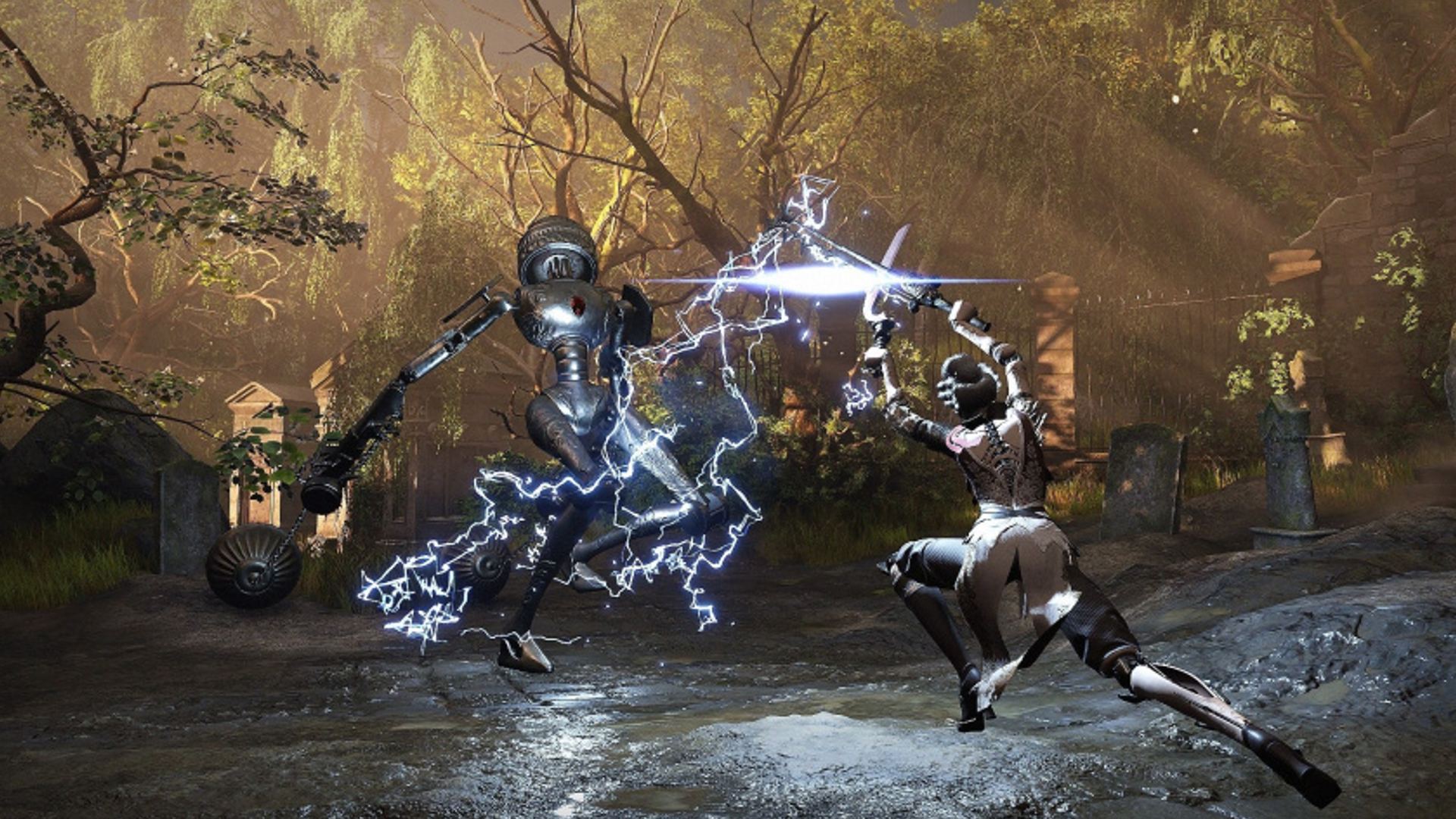 As someone who isn’t nearly as familiar with the French Revolution as I should be, this setup and concept drew me in. As a fan of history in its totality, I am of course familiar with the major names from the period, from Marie Antionette to Robespierre, Napoleon to Marquis de Sade, as well as key moments like the Storming of the Bastille and Reign of Terror, but my understanding of the nuances of the time is inadequate. You’re not going to get an education directly through Steelrising, however, being made by French natives as it is, the game has an atmospheric authenticity that captures the underlying fear and uncertainty that must have run rife through the nation at the time.

It’s also worth remembering that the French Revolution was the event that gave birth to our concepts of “left” and “right” wing politics. It is a moment of history that cannot be separated from the political environment, and certainly, the developers use the steampunk allegory to take a position of their own. At the same time, it’s unlikely that the allegory’s going to upset people that happen to subscribe to the other side (and I’m not even going to say which is which here as I wouldn’t want to dissuade you into thinking it was some kind of lecture), so that’s been handled with a deft touch by the developers without pretending that it isn’t a theme of the era.

The end effect is that I walked away from the game wanting to learn more, much like the original Nioh introduced me to William Adams. He, too, was a historical figure that was greatly embellished for the game, but his in-game adventures inspired me to learn more about the context, and I have since read multiple books about his real story, visited his memorial in Japan, and generally learned a lot. I love when games do that, and Steelrising will be much the same since I’ve already loaded my Kindle up with some books on the French Revolution. Structurally the game is a close student of the genre. You’ll start at Steelrising’s equivalent of a bonfire (in this case, a chair in a birdcage), before setting out to explore the area. The developers were fond of a “hub-and-spokes” structure where you’ll wind your way around for a half hour or so, before unlocking a door or pathway back to that original birdcage rest-stop, and then setting out to wind your way around a bit further and unlock yet another shortcut back to the hub. Steelrising is more artificial than From Software’s Souls games at this, by which I mean I could “see” how a pathway was going to wind back to the birdcage I’d just left as I set out. Paris’ streets are much more overtly levels in this game than the crumbling ruins of an Elden Ring, in other words, but that doesn’t stop those levels from being quite beautifully designed.

Spiders show a genuine knack for clever creative challenges within the Soulslike. When many “B-tier” developers take a crack at the genre, there’s a reliance on enemies having one of three advantages to build challenge: they’ll jump at you out of nowhere and with very little warning, they’ll have stupidly large amounts of health, or they’ll have attacks that require some incredible timing windows to counter. Sure, these are challenging, but they also often feel “cheap”. Spiders, meanwhile, instead focused on making enemies challenging by putting them into different contexts. The first time you’ll run into an enemy, it’ll generally be in a comfortable open space, and you’ll be facing it alone. But then you’ll be taking on one in a narrow space, and that’s a much more intimidating challenge. Then you’ll be taking on another while one of its buddies is taking potshots at you from above. This effort to continually recontextualise opponents is a clever way of continuing to use the same enemies (which Steelrising does admittedly rely on a little too heavily due to its budgetary limitations) without allowing those battles to become too rote.

The one real weakness is that the AI is unfortunately disappointing. Sometimes enemies seem to lose track of you entirely, or get themselves stuck on scenery. Thematically it’s actually not such an issue, since, as automatons, these things behaving like idiots come across as a quaint bit of characterisation. However, I’m quite certain that this wasn’t a deliberate design decision because it does inhibit the gameplay quality at times. Bosses, as well, tend to be fairly pedestrian in their tactics and how you’ll deal with them. I thought this might be an issue after cruising through the first couple, given that soulslikes often live and die on the quality of their boss battles, but again, in this instance, I found that I was so wrapped up in the adventure that I ultimately didn’t mind. Steelrising’s AI issues skirt disaster, and in any other soulslike they would be a big problem, but somehow, with the theme and design being so strong, it’s just not something that bothered me. 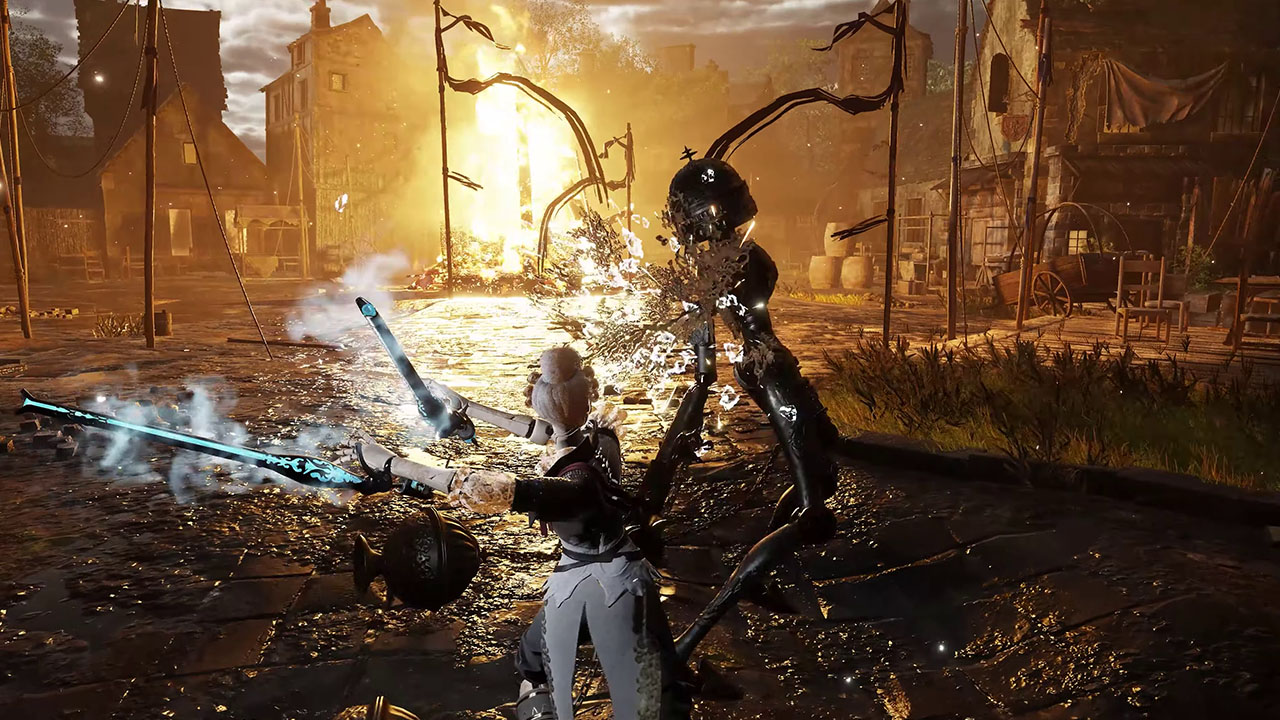 Additionally was one thematic quirk of the boss battles that I thought was quite brilliant – they did tend to become more unpredictable the closer they got to being destroyed. Perhaps this was just my perception, but it occurred in so many of the battles I must assume it was there by design. This wasn’t just that they picked up some new attacks and levels of aggression, as generally happens with “tiered” boss battles. Rather, it comes across as the metallic beasts becoming more unhinged as they started falling apart, and fluidly so, rather than in set, distinct “stages.” This fit nicely with their mechanical nature, and though it was generally a sign to start spamming the bombs and other items rather than let their unpredictability make them more dangerous, it still made those last moments of each battle a visual spectacle.

So, overall, whatever the minor weaknesses in how Steelrising played, I found the design and presentation impeccable. Your hero’s gait is believably artificial, although she’s able to dodge and dash as well as you need her to in combat. Paris itself takes on a character all of its own with its revolution-ravaged streets and creepy nooks and crannies. Enemy (and especially boss) design is fascinating and distinctive. Spiders has come into its own as an environmental storyteller. A big part of the appeal of Greedfall was the questions that every location raised, and the intricate details that were baked into the cities and landscapes. Steelrising continues this tradition in style.

Mechanically, the game doesn’t do too much to break away from the soulslike formula, though the focus is more on incapacitating enemies (my personal favourite was by firing frozen shots to shut their gears down), and ducking out of their way than the parry/riposte of many other soulslikes. In fact, many of the equipment types don’t even have a parry option, as it’s a special ability that’s tied to some weapons only. This does give combat a manic edge and squaring off against more than two enemies at a time becomes unwieldy, but when it clicks there’s a gorgeous flow to it. In fact, you can even choose “dancer” as one of your automaton’s classes, and she does spin and pirouette through combat most elegantly with the war fans that are her default weapon. Steelrising sits right up there with the original Nioh as my favourite example of a Soulslike made outside of From Software. The spectacular alternative history backdrop is a delightful way of getting people interested in the events and people of the French Revolution, and that’s backed with some of the most enjoyable and distinctive level and environment design that we’ve seen from the genre to date. Of course, it’s not Elden Ring, and was never going to hit that level of polish or scope, however, it also wasn’t trying to. It’s very comparable to the likes of Nioh, and the sheer thought that went into making every building block within it relate to its themes and artistic vision makes it a compelling and thoughtful entry into an increasingly over-crowded genre.

Valkyrie Elysium seems destined to be one of the rapidly…

Podcast-in-Video: On how updates can mean we lose games