Why does the girl have to choose just one of these boys?

Amnesia: Memories was first released over a decade ago, and it’s fair to say that the visual novel genre – and particularly the otome sub-genre – has moved at a rapid pace from that time. That’s not a criticism of Amnesia, by any means, but the experience of reading through this game in 2022 is not unlike reading a classic novel: it offers a traditional kind of excellence.

In the years since we’ve seen the otome genre diverge in all kinds of directions, but many of the more noteworthy ones have taken on a hard edge indeed. As good as Piofiore, Olympia Soiree, and others can be (and indeed those two examples are), the fact that the heroine can very easily end up becoming a sex slave (or worse) can come across as being surprising to genre newcomers. After all, otome is often described as a romance genre, aimed at women… almost like the Harlequin novels of video games. The last thing you’d expect is to see the women beaten and broken, and you’d have to assume that what some of the women protagonists in these games go through would be difficult to call “romantic.” I know more than a few people that were utterly surprised by just how dark these games can get at times.

There’s one story route in Amnesia that tracks down this kind of narrative pathway too, and it’ll be the one that is the most polarising for players. For most of the rest, however, Amnesia comes across as a very romantic thing indeed, and therefore (weirdly) quaint for the genre. It’s not an uncomplicated kind of romance, and certainly the bad endings are not the endings that you want for the heroine, but uncomplicated and messy as the subject can be, Amnesia’s greatest strength is that it remains very fixated on telling stories of romance. 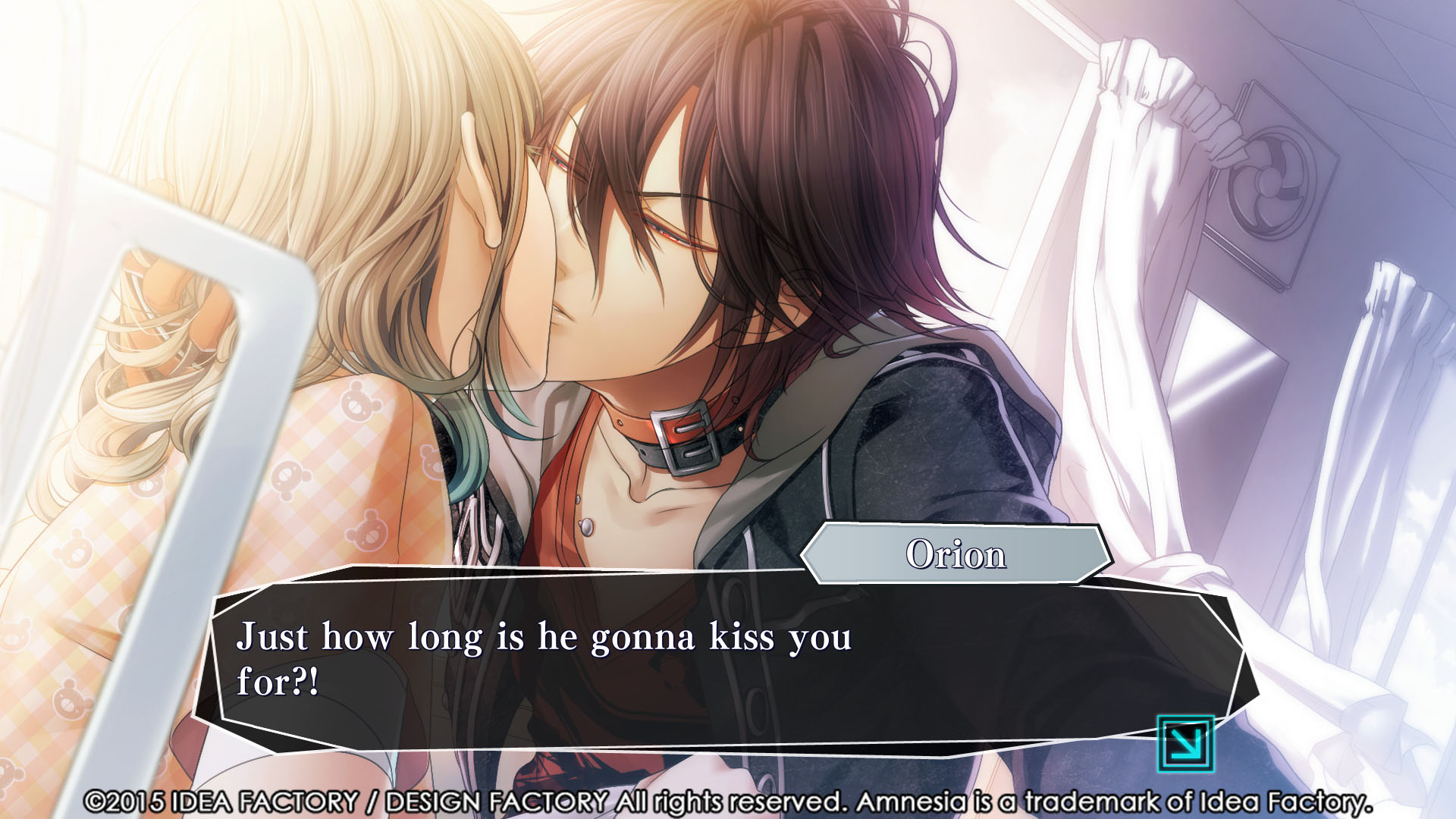 The basic flow of Amnesia works as follows: At the start of the game, you pick from one of four (later on, five) suits from a deck of cards (Clubs, Hearts, Spacers, Diamonds – Joker is the later, fifth option), and then from start to the ending (whether it be a good or bad one), the story remains locked to the character that the suit represents.

Each story follows a general arc. You play as a young woman, who has lost all of her memories after a spirit collided with her (otome stories really do love their exotic contrivances). She needs to interact with these ultra-attractive men in order to slowly piece those memories together, remember her relationship with them, and ultimately, separate from the spirit again.

It is a bit of a contrivance, but as an analogy for relationships, it’s a pretty useful one. One of the things that make relationships so exciting is the joy of discovery – learning about your partner and, in the process, yourself. This is made pretty literal through Amnesia, and in doing so – even via the one love interest that goes some very creepy places – this game does come across as a more pure and focused take on romance. Again, it’s not always pretty, but there’s an earnestness and honestness in the way that Amnesia depicts romances – and the not-always-ideal surprises that come as you get to know your partner – and it’s incredibly appealing to read through. Most of the “big” otome releases tack the romance on to some broader adventure that the protagonist is on. This one keeps things focused, and is quite interesting for it. 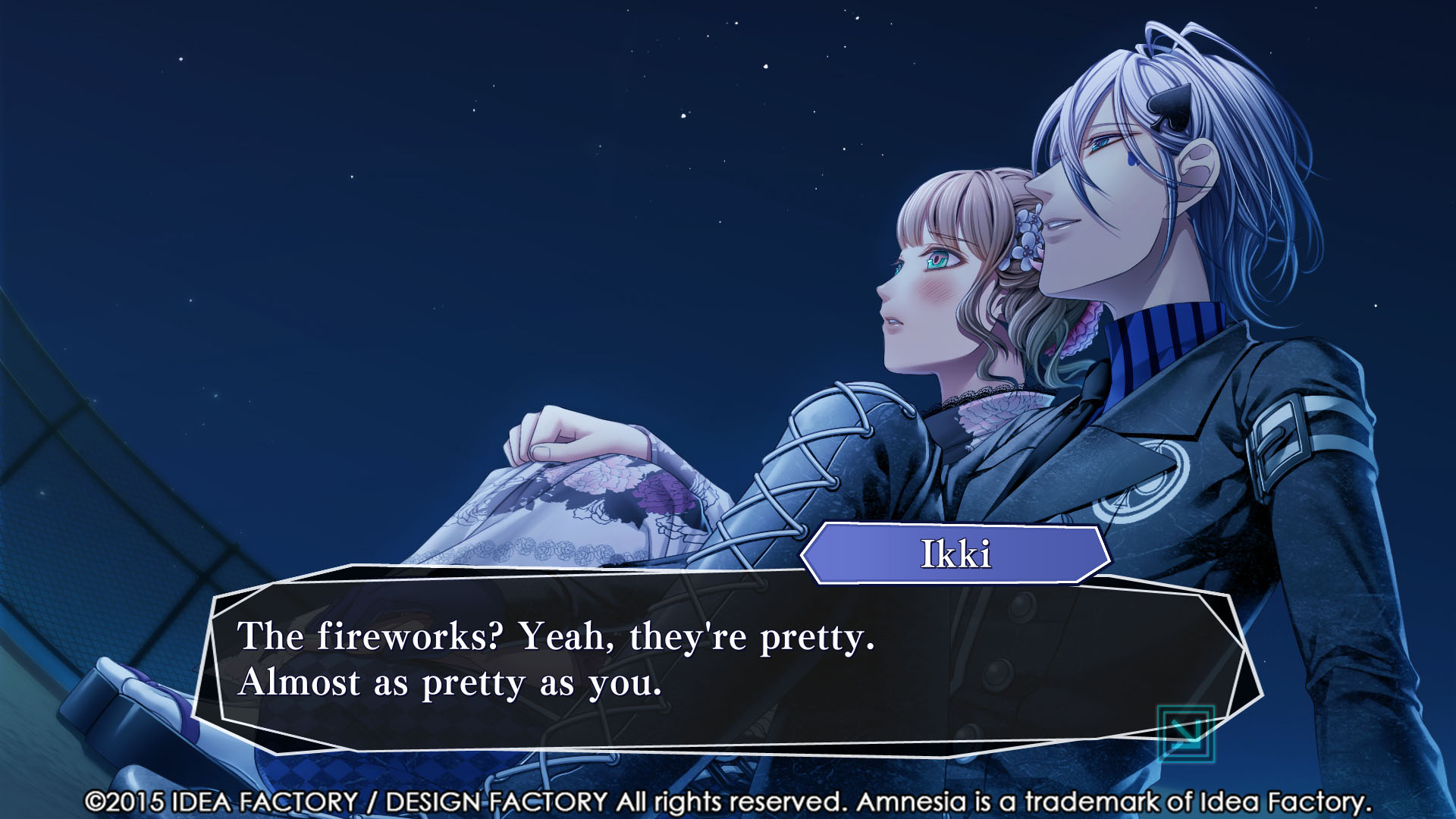 There are a couple of things about Amnesia that help it to stand out, all these years later. Firstly, it is without a doubt gorgeous. Even by Otomate’s standards, as perhaps the most aesthetically driven of the otome developers, Amnesia stands out as some of the team’s best work. You could probably say that the characters look “traditional” now, as VNs start to edge towards more unique and quirky character designs, but they’re all believably romantic partners for the woman. They run through the gamut of expected character types, too – you’ve got your tsun, your playboy, that decidedly creepy guy with boundary issues, and the sweet guy you end up rooting for – but they’re all highly likable (yes, even the creep, though you’ll hate yourself for feeling drawn to him), thanks to the way they’re written.

That brings me to the second stand-out quality in Amnesia; the writing is wonderful. The spirit character, which starts out being a nonsense contrivance to give the protagonist her amnesia, even becomes something potent to the story, and metaphorical for the discovery process through a relationship. While the basic narrative arcs in Amnesia don’t push boundaries, the way they’re presented is interesting. Each of the “suits” that you pick at the start of the game draws you into a completely different world, and the interactions with the characters change as a result. It means that the discovery journey is renewed each time, and that means that there is a genuine reason to run through each route in this game.

Most of the time with visual novels I recommend people to play through just once, and let that ending be the “canon” for them. As visual novel endings are decided based on the decisions that you make, the first run-through is always the one that most accurately reflects you as a reader, and after that, you’re manipulating the system to artificially arrive at the endings. It loses its organic quality as a storytelling device when that happens. 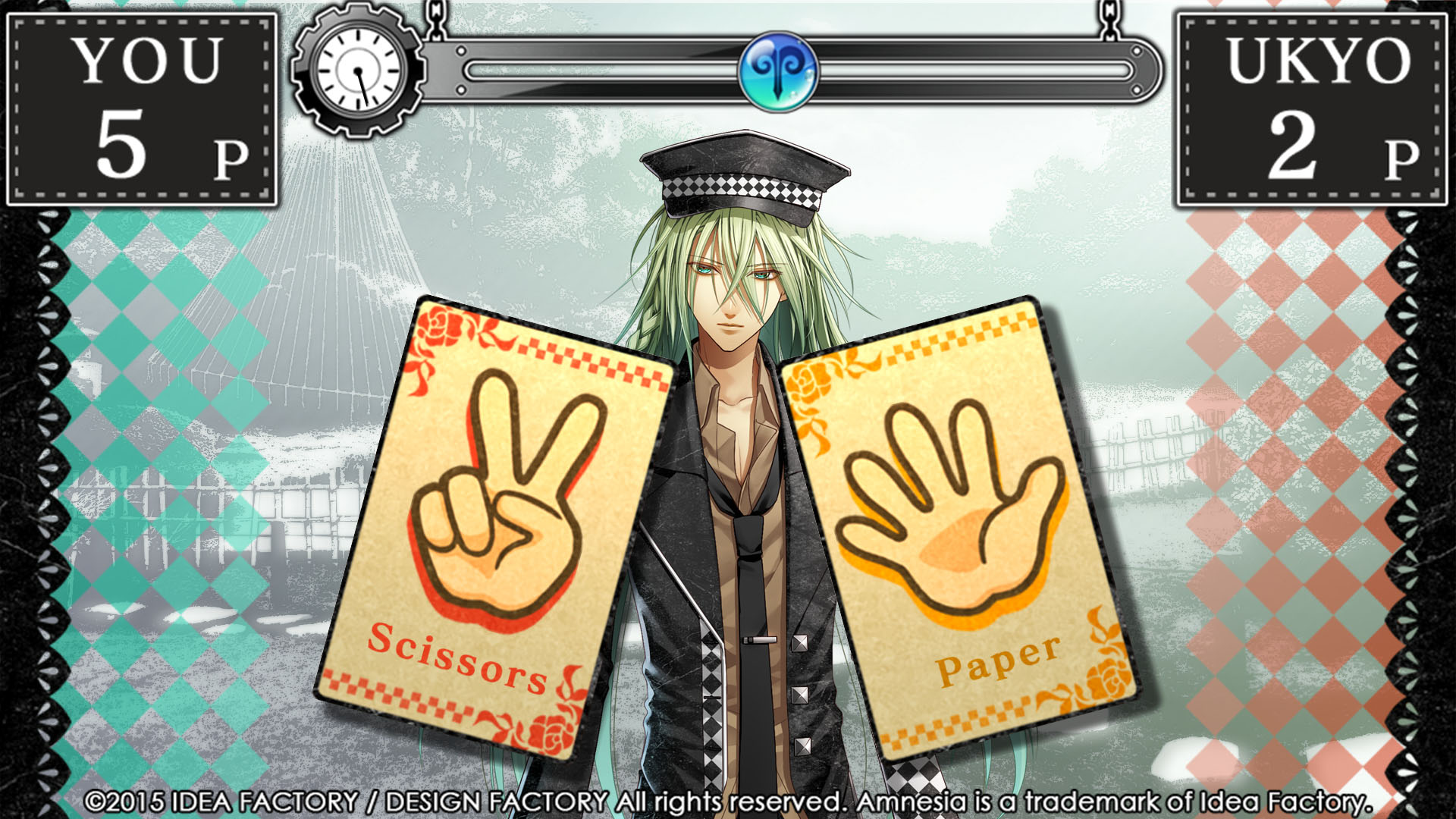 But here, by packaging each story is effectively independent of the others, Amnesia gives you five bites at that particular apple. I still recommend that you allow each arc’s end to sit as it does, whether it’s the good or bad finale, but getting the most out of this game does rely on you seeing each story arc.

There’s not much more I can say about Amnesia without going heavy on the spoilers, and part of the reason it has been re-released on Switch is so people can experience them for the first time. However, what’s important here is that Amnesia: Memories is a well-written visual novel, and in so many ways epitomises the qualities of what you might expect from a “classical” otome game. For that reason alone, genre fans, and anyone interested in learning about it for the first time, owe it to themselves to check this game out.

Countryside Japanese farming is back… and no, it’s not Harvest Moon!