Really gotta get me one of these masks...

Releasing a “Soulslike” in the same year as Elden Ring is, I would argue, unwise. You’re never going to come off well in that comparison and it’s only going to result in your game being judged more harshly than it deserves to be. In that context, Thymesia really should have been pushed to 2023. However, thankfully, it’s not another case of Pascal’s Wager. Far from it. Thymesia should have been pushed so it could sidestep at least some of the weight of criticism that it’s not Elden Ring, but taken by itself, for what it is, rather than what it is not, the game is very worthy in its own right.

The set-up is exquisite. You play as a being known only as “Corvus” (the Latin name for the genus of bird that includes ravens and crows). This family of birds that his name is drawn from has a deep historical and cultural resonance, ranging from playing the role of messengers right through to things far more sinister (we call a group of crows a “murder” for the lord’s sake), and that name certainly fits with the atmosphere of Thymesia. Furthermore, crows have a beak that looks like Corvus’ mask. He’s wearing a plague doctor’s mask, see, and even before you look at the game’s locations and enemy designs, that character model situates the game immediately and makes it quite clear what kind of ride you’re in for.

The Black Death – the historical nightmare that plague doctors are a dominant symbol of – has long fascinated humanity because it sits right at the extreme of experiences. Never, in human history, has there been such an existential terror quite as severe as what the people of Europe must have felt as the plague swept through their towns and cities. We think COVID-19 was bad, but the black death killed around a third of Europe’s population. Imagine what the world would have been like if the COVID-19 death count hit 2.55 billion people. That’s the impact we’re talking about here. It’s amazing that the societies of the time didn’t break down completely. 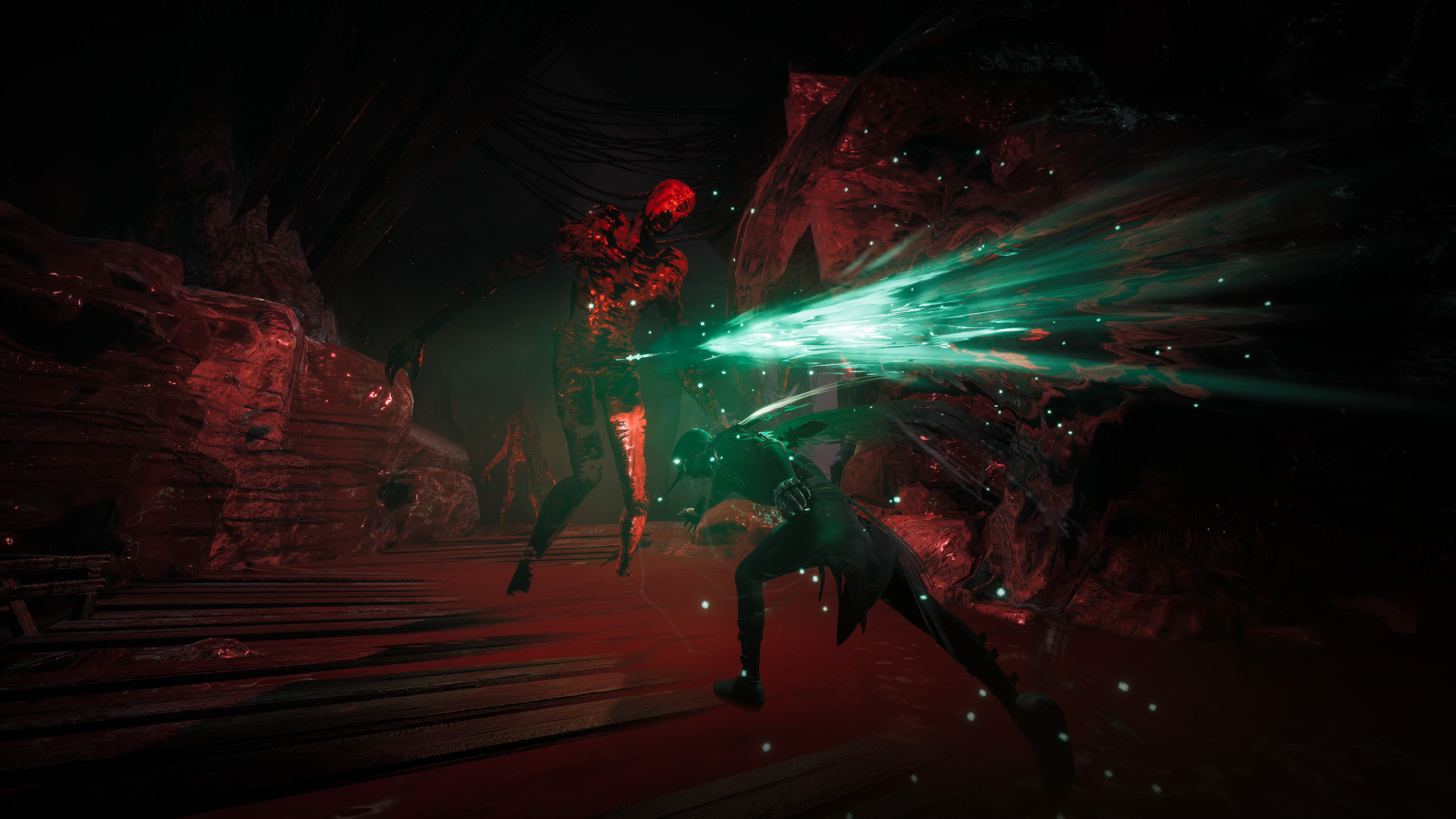 Because the Black Death was such a monumental, extreme experience, it has fascinated those artists that deal with topics of existentialism, absurdism and nihilism. Albert Camus, in his amazing novel The Plague, wrote “all I can say is that on this earth there are pestilences and there are victims – and as far as possible one must refuse to be on the side of the pestilence.” It’s a dark topic, yes, but also a near-perfect backdrop to explore the very concept of humanity and morality, faith and philosophy. As Camus writes later on in the same book: “’Do you believe in God, doctor?’”… ‘No – but what does that really mean? I’m fumbling in the dark, struggling to make something out. But I’ve long ceased finding that original.’”

(Seriously, you should all read The Plague. It is by far my favourite from the “philosopher writes a novel” genre).

Thymesia’s narrative is not exactly a literary work of philosophical brilliance, but it does tap into both the moral terrors of a culture beset by plague, squared off against the capacity for humanity to be far worse than the disease (something A Plague Tale from a few years ago was also quite good at doing). So often in plague-based literature that’s the point, that humanity is somehow a greater threat, still, than the sickness ravaging the population, and that’s the question that a lot of this game asks, too. What I particularly like about Thymesia is how it’s presented, though. Just like in the Souls games, the narrative is delivered more through snippets that you uncover here and there as you explore than it is lengthy cut scenes and deep narrative sequences. On the surface alone it’s a creepy world that you’re exploring, but if you take the time to seek out the jigsaw puzzle of meaning from the hidden notes and scrawled messages, you quickly realise that what’s going down is so much worse than what’s on the surface. 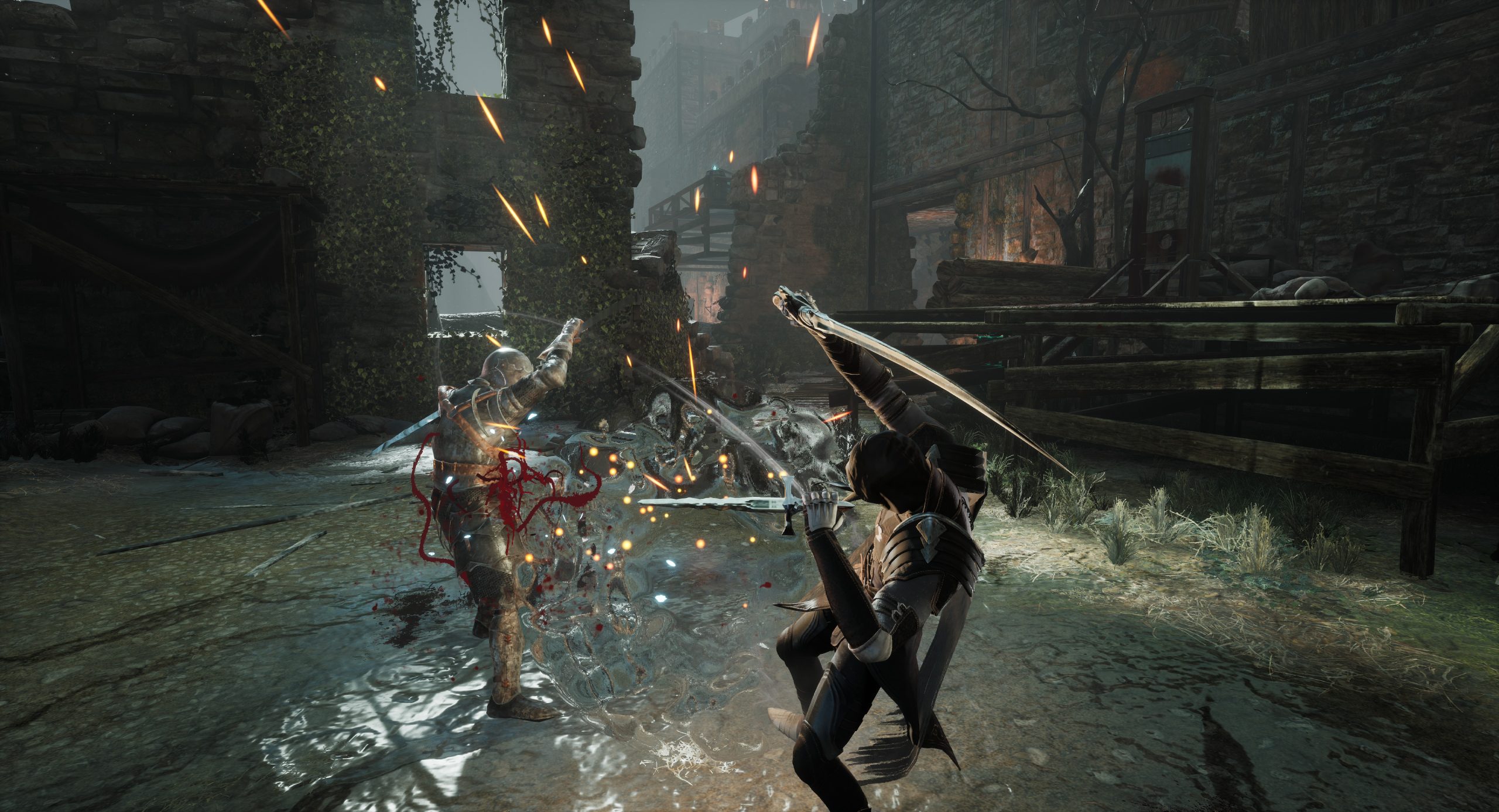 As a game, Thymesia was clearly inhibited by a limited budget. With some of its limitations, the developers have found some creative solutions to conceal and hide the modest resources they were working with. At other times it’s painfully clear they’re swinging for the home run with a paper bat. On the plus side, you have some heavily streamlining of the various systems that are typically at play in a Souls game. For instance, there are only a couple of statistics to level up (each experience level allows you to boost one of just three stats). There’s a skill tree, but it’s fairly limited and shallow by design. There’s only one main weapon. At first, all of this seems overly restrictive and “cheap” (especially if you’re bouncing off Elden Ring), but once you get into the rhythm of it, you realise that the simplicity allowed the developers to focus on a singular approach to combat, and really nail the visceral feel of it.

The approach that the developers opted to focus exclusively on is that of a kind of fluid aggression. There’s little room for careful poking and prodding when you’re squaring off against one of the monsters of Thymesia. You need to go big and go hard or the enemies will, eventually roll you. Though there are the parries and dodges that you would expect, and by playing the skill tree right you can actually give yourself some big buffs by doing those things well, the game wants you to wade in, act fast, and don’t take a breather until the enemy is dead at your feet.

There are some nice development tricks that also encourage you to play with fury, and reward you for doing so. Each enemy has a “shield” rating, in addition to their health bar, and that shield will steadily recover when you’re not damaging them. To get at their health, you need to damage the shield with your normal weapon, and then hit them with a specialised claw attack. Do that successfully and you will permanently reduce their health as far as you’ve damaged the shield. It’s possible to kill enemies with one hit by reducing the shield to nothing and then hitting them with the claw. Or you can chip away some of the shield, hit them with the claw, break away, and continue the process until they finally fall over dead. For the tougher enemies and bosses this is the way you’ll probably play. It’s a great system, especially when you also factor in the downside of the claw attack: it is slow and leaves you vulnerable as you wind it up, so you need to pick your moments well. 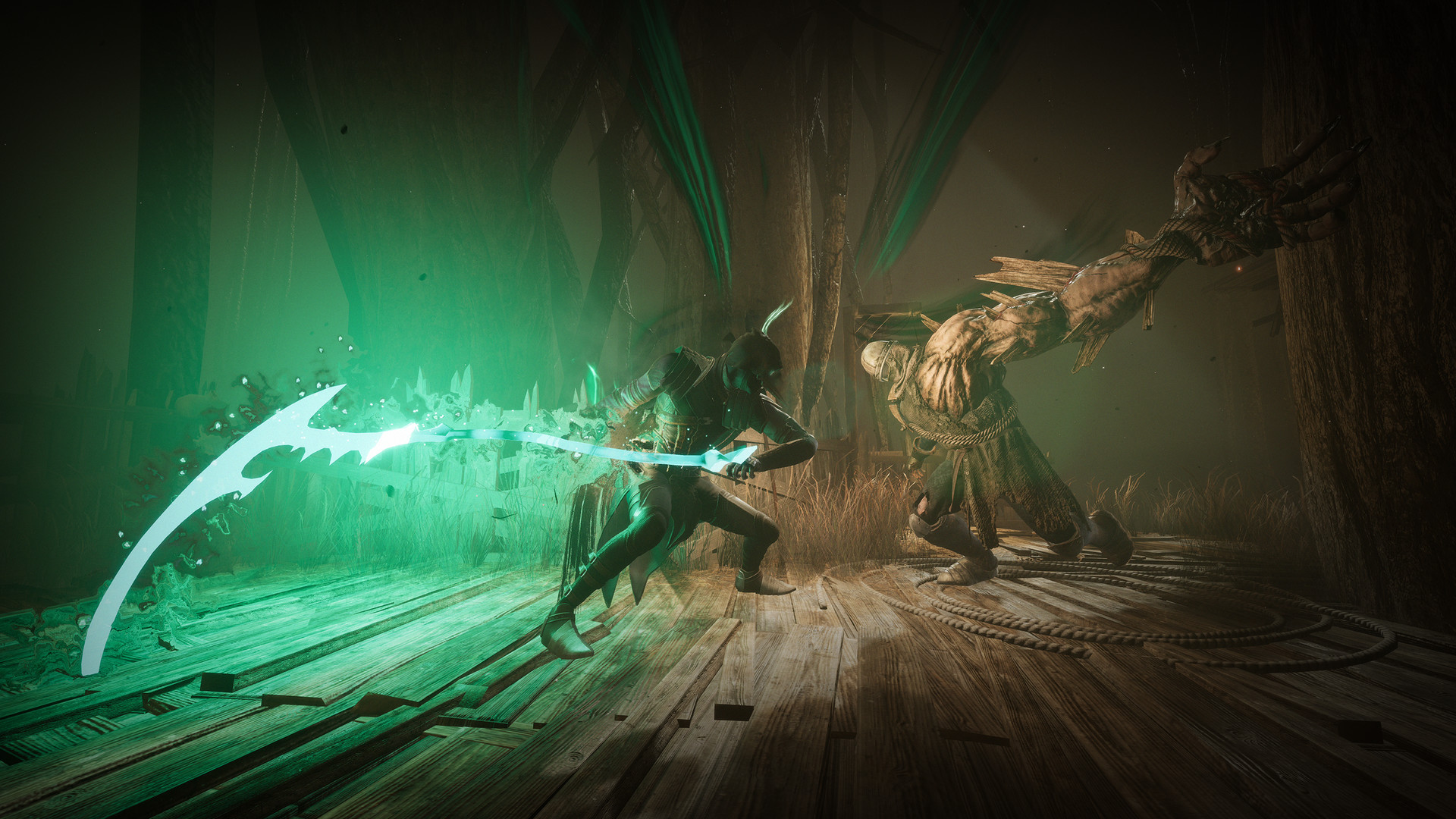 As an added benefit, when you successfully “claw” your enemies, you gain a single, free use of their weapon as your secondary weapon. These range from basic swords, axes and lances, through to ground-pulverising fists, invisibility, and other exotic abilities (usually from bosses). This is an important system, as the only other way to use secondary weapons is through magic, and they chew through your MP fast. These secondary weapons are the most effective way to deal with enemy shields, so if you want to preserve your precious MP, you’ll need to be constantly clawing the enemies to loot them while also damaging them.

Again, this is all excellent. The developers were smart in really focusing on getting the combat flow down right, and deciding that they would be better producing a streamlined and exciting soulslike than trying to go big with options and mechanics and falling short with it all. The downside, however, is the other areas where the game shows its budget. The AI isn’t great, for one thing, and common enemies and mid-level bosses will stop chasing you if you run too far from their patrol zones. They also can’t climb ladders and the like, so it is far too easy to zip right past them, or escape when on the verge of death. Boss battles can be challenging, but unfortunately, they’re a little too straightforward in their attack patterns, and given that they have large health bars, they tend to be grindy wars of attrition and nowhere near as exciting as we see in some of Thymesia’s genre peers.

Finally, voice acting is incredibly limited, and that really hurts the personality that the game could have had. Going through all the effort to get to boss that just… attacks… is pretty anti-climactic. For example, the game’s first main boss is a circus owner that you know has been doing truly horrific things to the poor, thanks to the notes that you’ve found scattered around the place. Given that the circus (the level you’ve just been exploring) is filled with zombie-like monsters, corpses, and malignant sacks of poison gas, you definitely want to hear from this guy as the cumulation of a pretty memorable level, but what actually happens is that he just grins at you and attacks. You’ll even miss his name if you’re not paying careful attention to the subtitles. This limitation is such a waste, as it undermines so much of the good work that otherwise went into the aesthetics and cinematics. 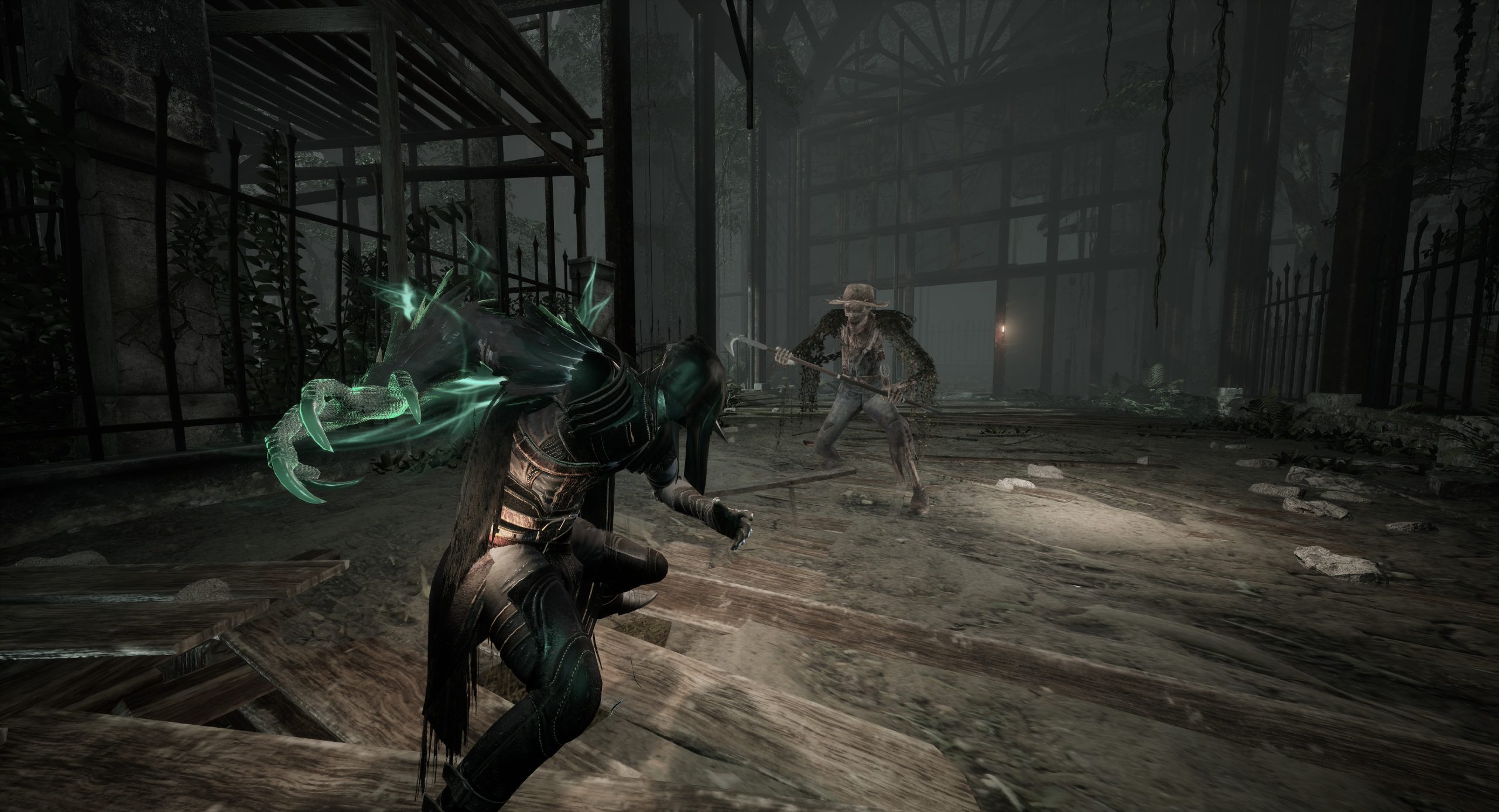 If you can handle the corners that were cut due to the budget, then Thymasia’s combat system is worth it all on its own. The game’s intriguingly dark setting and the exquisitely dark theme are more than good enough to pay attention to as well. There are certainly things that the development team could do with a sequel if this generates enough revenue to build on the foundations that they’ve created, but the earnestness that went into making this one distinctive from the other “Souls clones” is worthwhile either way.