The boys are back.

Following on from the release of Otoko Cross: Pretty Boys Mahjong Solitaire in May, I’m not going to have too much additional to say about this Klondike Solitaire take on basically the same concept. It’s a game about enormously pretty boys that dress up in girly clothing and then, as you clear stages, they strip those clothes off for you.

In other words, it’s basically a cross-dressing take on the Pretty Girls games that publisher, eastasiasoft, has been so active in supporting. And it’s great. To take some paragraphs from my original review to highlight what I loved about the presentation and design of the game:

I’d be lying if I said I was the target audience for this kind of material. It obviously doesn’t make me uncomfortable, since here I am playing it, reviewing it, and to spoil the score down the bottom, I liked it a lot, but on a personal level I’m pretty blandly straight when it comes to my preferences. Even the twintails character in the roster here, despite being very pretty, doesn’t quite work for me like an equivalent featuring Marie Rose from Dead or Alive would. But! I can certainly appreciate the art, which really is stunning, and I like that it’s different – at least as far as my exposure to this stuff goes. The Pretty Girls games are fine, but the girls are commonly big-boobed, default fan service fare. There are far fewer games that feature this kind of fan service, let alone explicit nudity, and as far as my art tastes go, I do like things that are different. 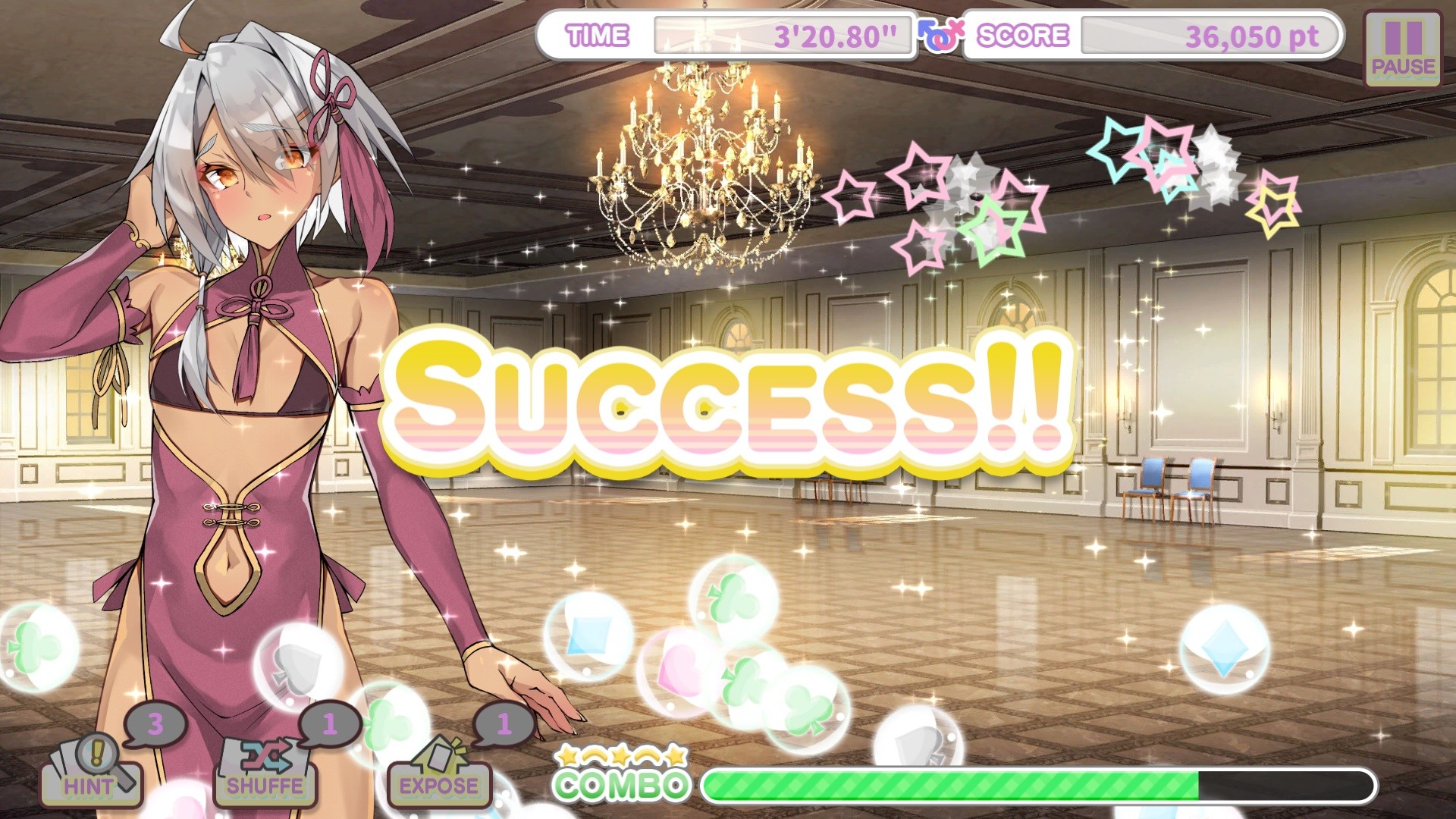 The developers have also done a bit to give these five characters personality and backstory. It’s not much – one or two paragraphs at most – but it’s a context that a lot of other fan service-pure games ignore. The fact that it’s there at all means that I suddenly remember the names – hi, Morgan, yes I do remember you – and in theory, the developers can now build on these characters in future games and turn them into something more than a fleshy reward that hangs out on the side of the screen. Otoko Cross is limited in what it does, but you can tell that the team really cared about this project and wanted to make it more than a genderswap crossdressing Pretty Girls game. They wanted to give this, and the characters, an identity of their own.

Other than that there’s not much more to Otoko Cross. It’s Mahjong Solitaire, and we all know (and love) how that plays. As vanilla as it is, it is a timeless classic formula, and much like Tetris, it was actually one of my first games on the Game Boy so I have forever had a fondness for it. Otoko Cross adds the outrageously pretty boys, some gorgeously-rendered Mahjong pieces, and some lively backgrounds, with the only downside there being that a tiny few of the backgrounds can actually distract me from the pieces. It’s only a few, but they are perhaps a little too detailed and visually dense for a game that is asking me to focus on the pieces.

All of that applies to this Klondike Solitaire take, too, just via a different form of solitaire. Samey as it might seem, just changing the kind of game on offer is a good thing that eastasiasoft has done. People who may have loved the aesthetic of the pretty boys – something that we rarely see in games – but felt left out because they aren’t Mahjong fans, can now be included and enjoy the concept, since just about everyone loves Klondike Solitaire on some level. It is history’s greatest productivity killer at work, and while I wouldn’t necessarily recommend loading this particular take on the game at work (HR tends to take a dim view on pretty things and exposed bits during work hours), the developers have done a good job of building a perfectly robust Klondike experience here. 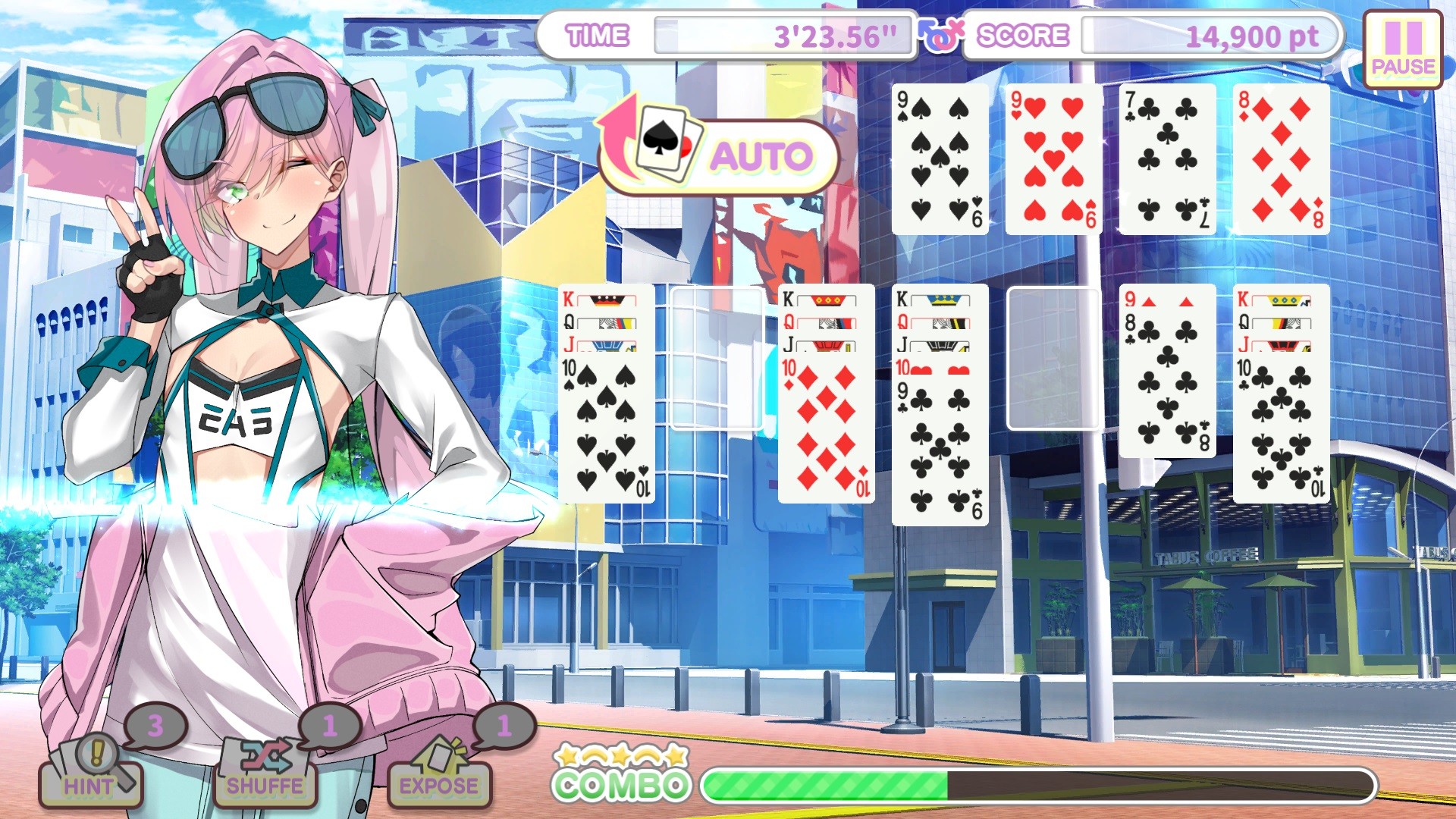 Easy mode is the one-card variation (i.e. every time you flip cards from the deck, it’s one at a time). Hard mode is the more traditional three-card version. There, you’ll get to enjoy the frustration of the unwinnable states that are part of the Klondike experience, but there are plenty of help options available to you to make things as easy as possible.

The only query I have is the scoring system, which relies on you playing cards fast, with a combo meter that rewards you the more cards you move quickly. For Mahjong, this more-or-less works as a scoring system, as there’s an element of skill involved in being able to quickly spot matching tiles in sequence. With Klondike, however, when you need to flip over cards and there’s a limit to how many you can line up simultaneously, such a combo and scoring system is arbitrary and frustrating. The game tracks leaderboards, but the people on the top of the leaderboard simply got lucky with the order the cards showed up. There’s little real skill involved.

Then again, you’re not playing the pretty boys game for the leaderboard glory. You’re playing it for the pretty boys, and eastasiasoft has delivered to the same standard as the predecessor. I hope these games have been enough of a success for them to encourage more down the track, because the diversity in raw, unmitigated thirst is appreciated, and I would like to see the series break out of little casual puzzle games so they can fully run with that. Let’s talk about taking these great characters you’ve got and their potential for a visual novel, EAS. I’m up for it if you are.