I’ve played loads of farming sims (Harvest Moon, Story of Seasons, Stardew Valley) so when I learned I was going to review Farm Manager 2022 I was pretty excited. I figured it would be like those games but seriously amped up, and I wasn’t wrong there. It’s an incredibly in-depth farm management simulator, complete with crops and animals and machinery and factories. It’s a lot. Like, a lot a lot. But was it too much?

There are a couple modes to play: a tutorial, campaign mode, and free mode. The bulk of the game (at least the way I play) is spent in campaign mode; it kind of holds your hand as it guides you through starting and growing your very own farm. It starts easy enough, with a few cows and a few fields, but soon amps up to dozens of animals, fields as far as the eye can see, tons of staff (and housing for them), and factories to process select ingredients. You can buy and sell, you can upgrade, you can repair, you can build roads and electrical grids… it all adds up to a lot to remember.

I’d like to get my main thought on the game out of the way first: it is way too complicated. There are a myriad of reasons for this, beginning with the fact the tutorial only teaches you some of what you need and the rest is basically a case of “figure it out or screw it up”. I’ll be completely upfront here: I don’t mesh well with tutorials. They often give out an overwhelming amount of information in a small amount of time, and my brain needs to absorb things a little bit slower. I didn’t really understand how electricity worked post-tutorial (and I did it three times since I know I don’t properly absorb information!) so I ended up making mistakes and having to restart my early campaign several times to figure it out. It never tells you how to manipulate time. It doesn’t give any instructions on what to do when your animals are starving even though you have more than enough food for them. There’s no guide on staff past how to hire them, but I really would’ve liked to know things like whether or not their skills can be improved. It doesn’t teach you how to delete buildings or roads or electrical poles. It’s just a very bare-bones tutorial that doesn’t give the player the best chance at success in the campaign.

Brief sidebar: this is why I take issues with annual games. Inevitably, the developers assume people have played the past titles and will explain the newer mechanics but not the base ones. When I saw that “Farm Manager” was followed by “2022” I was briefly filled with dread, but decided to push through. And despite my gripes about the lack of knowledge in the tutorial, I did quite enjoy the game (except for when my darn cows were starving… repeatedly… for no known reason).

The campaign begins with the main farmhouse and a couple of outbuildings. You’re given a solid amount of cash to start out with (more than I imagine real farmers would ever enjoy), and I never encountered an issue of spending too fast and running out. New elements were introduced at just the right times to start making that money back. You have to focus on the numbers closely enough to not go broke, of course. Each building costs a certain amount to run over month. Buildings, roadways, animals, machinery, it all costs cold hard cash. If something breaks? You’ll need the money to fix it! And trust me, the machines will break. Again, the prices are all reasonable and never break the bank (so, again, seemingly divorced from reality). My farm became very focused on making cow’s, goat’s, and sheep’s cheese because it’s actually quite lucrative! My crops were pretty focused, and I generally only planted the things my animals would need to nosh on at some point.

Buying and selling is relatively straightforward. Bumpers scroll through categories, triggers scroll through buy/sell options. Everything is done with the d-pad otherwise (as the joysticks are really only used for the camera angles). I do have a really big gripe, though, and that’s that I can never see what I’m actually buying until I click on it. It’s usually the wrong thing, so I keep going until I find the right thing then delete the rest from my cart. A little hovering label would solve that. I admit my eyesight isn’t the greatest, but even with my glasses a lot of the little icons looked identical; it got even worse when they were shrunk onto seed bags. 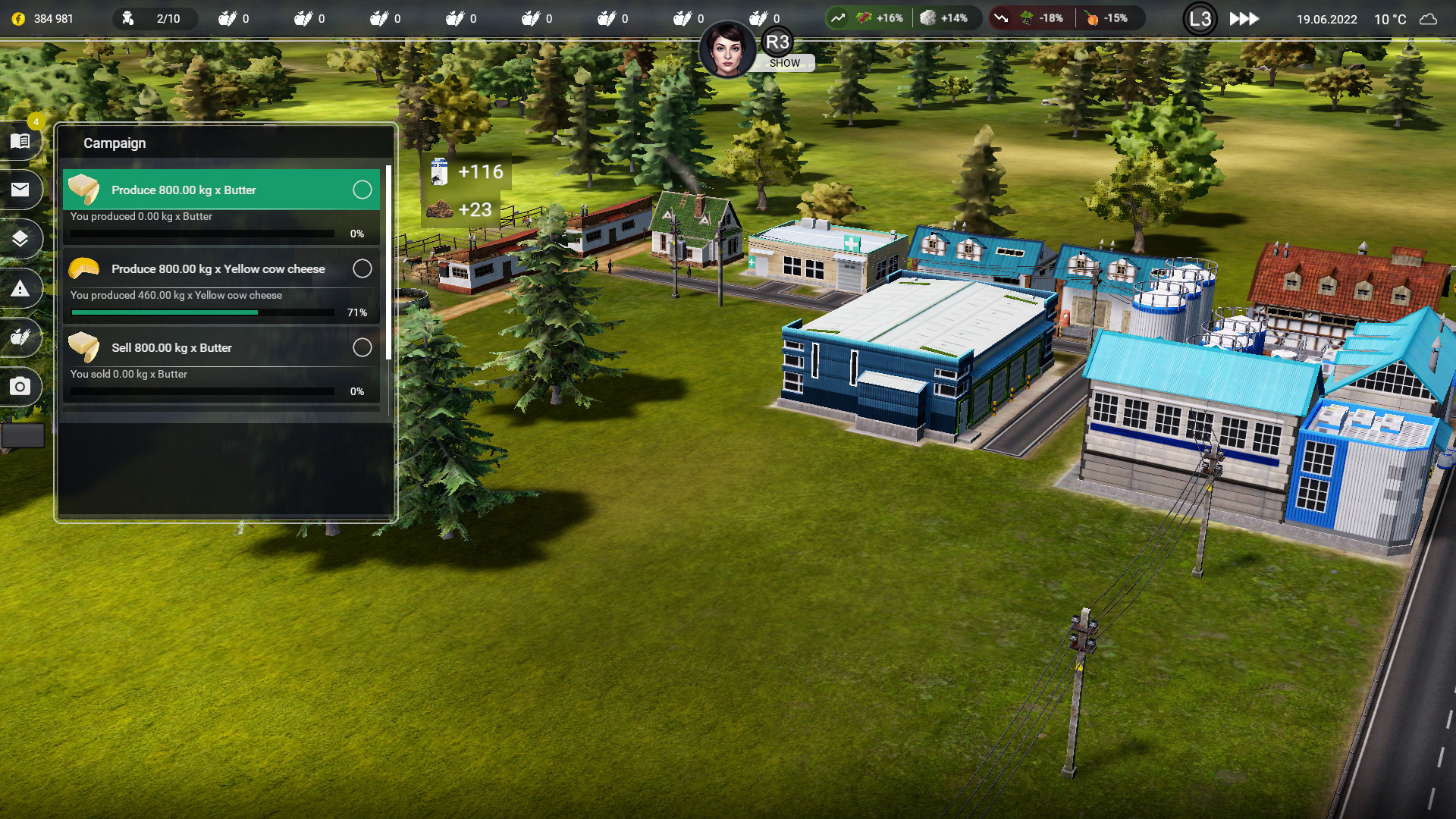 There are a little menu of icons accessible by tapping the touchpad. First off, a little black rectangle is not necessarily an obvious representation of the touchpad on the DualShock 4 controller, so it took me forever to figure out how to use it. You know what could’ve solve that? You can probably guess what I’m going to say: a little note in the tutorial! Anyway, the menu of little icons is super helpful. It includes your goals, messages (things like “your field was plowed!”), alerts (“your animals are starving in cowshed 2!”), layers (so you can focus on, say, electrical), and a camera mode that takes away all the UI for a nice, clean screenshot. Generally, clicking on the goal or the alert will direct you to the menu or item that will solve the goal/problem. It’s much easier to click on an item and having the screen jump to that place, especially as the farm expands.

Accessibility-wise, the most glaring issue is the teeny tiny menu text. There’s no need for it to be so small! Most text is actually too small. There’s no easy undo option, so someone who takes a little bit longer to maneuver the game may struggle with having to restart. It’s definitely the lack of explanation that causes the most issues. Having a second pair of eyes (and a brain that works differently than my own) definitely helped me the most when it came to these struggles.

So whenever I wasn’t about to Hulk Smash the entire console (I promise I’m exaggerating, no consoles were harmed during the writing of this review) I did actually quite enjoy the game. I’d sit down to play for an hour, and come out of it twice that amount of time later with burning eyes because I barely blinked in case I missed something. There’s a great satisfaction felt when your farm starts functioning, then when it expands a little, and especially when it starts bringing in the cash. If only the developers were better at onboarding players and providing the information that they need to fully understand what’s going on around them, this little franchise has the makings of something special.

Podcast-in-Video: The stories that only games can tell