Stop ruining the beach for me!

This one’s “gameplay”, if you could call it that, involves quick memory. In theory, you’re meant to be “seducing” a girl by not “lying” to her, but it’s nowhere near that theme in application. The girl will ask you a question, from which you need to choose from four different answers. The first time you choose that answer it “locks” it in as the correct one. So, for example, if she asks you what your age is, and you respond “22”, then that becomes the correct question. Then the game moves on to the next question, and after a while, you’ll get some of the old questions asked to you again. If you respond in the same way as the original answer, then great, the “game” continues. If not, then the girl calls you a dirty liar and it’s game over.

There’s also a timer and it ticks down more quickly the more questions you get right, and soon enough you’re not going to have the time to look at the question. You’re just going to be trying to pick out the word combinations and numbers that you remember setting as the “answers”. Eventually you will make a mistake and it’ll be game over, at which point your choices are to either play again, or exit back to the main menu where you can spend “coins” (they actually look like gems) that you’ve earned from getting questions right on unlocking more costumes and characters. 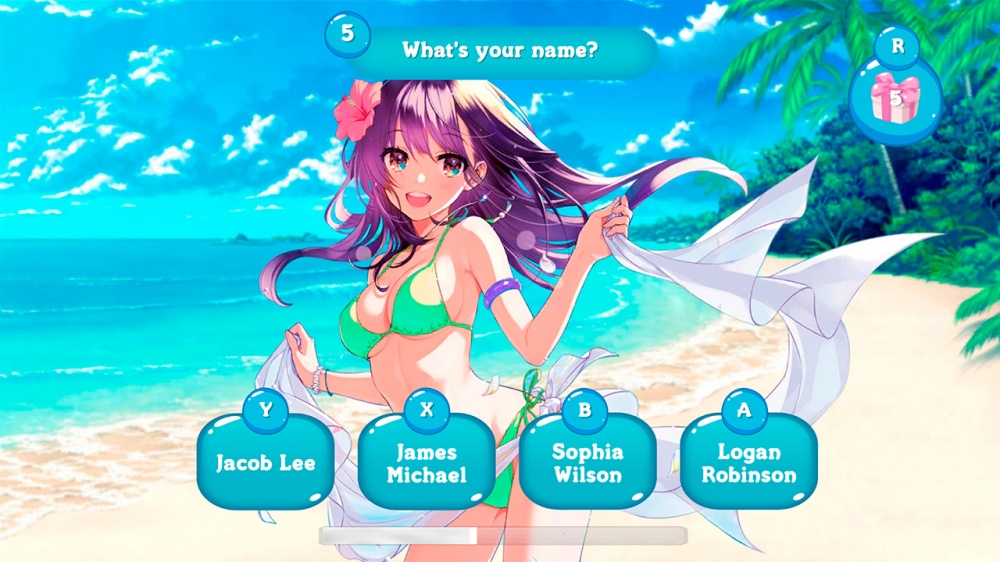 That’s all that is there to this game. There’s no personality or character to the girls – they’re just static background images that are randomised each time you play. They don’t even ask unique questions – it’s the same pool of questions per character. These questions don’t count as a genuine interaction between two people, either, since the questions include things like “what is your age?”, as mentioned before, and “what is your name?”… and how many times do you need to ask those questions in a conversation? By the time you’d told the girl your name is “James Michael” and you’re “22”, for the 15th time you’re going to lose any sense that you’re actually interacting with whatever character is on screen with you.

What absolutely sucks about Beach Girls is that some of the character art is decent. Some of it, anyway. There are something like 30 girls to unlock, and though they’re not animated, they’re nicely drawn and would be right at home in a higher-budget indie visual novel. The artist’s talents would have been better directed to a more purposeful project.

I understand the impulse to throw down a couple of bucks for a game that features pretty girls in swimwear. A bit of fan service can be fun and all that, and for a couple of dollars, you’re not going to expect a masterpiece. But for fan service to work, you’ve got to be a fan in the first place, and the complete lack of character and purpose in Beach Girls means that it doesn’t work as fan service either. The fact that even Steam isn’t getting laboured with stuff like Beach Girls, or Hentai Uni before it, suggests that Nintendo is perhaps being a little too open with its open platform.