Review: The Cruel King And The Great Hero (Nintendo Switch)

So sweet you'll need a trip to the dentist after playing it.

Before I sat down to play The Cruel King And The Great Hero, I thought it was going to be in the same vein as The Liar Princess And The Blind Prince, a previously-published NISA title with a very similar aesthetic. That would have been enough for me. The Liar Princess is one of my favourite puzzle-platformers of all, and because The Cruel King looked like it in the promo art, I didn’t feel the need to learn more about it than that. I had already been sold on it. Imagine my surprise, then, when I discovered that it was actually a JRPG. My favourite genre of all.

That surprise turned to delight as I got deeper into it. This is a brilliantly warm and wholesome, classical JRPG. Mechanically it doesn’t try to do too much, but if you grew up with the genre then the throwback to the SNES and earlier era of turn-based combat will be pleasantly nostalgic. This is backed by a truly delightful bildungsroman tale of a little girl and her dreams of being a hero, despite being the only human in a society of monsters (and therefore feeling like quite the outsider). And it’s the story of her “father,” the king dragon, and his protectiveness as his “daughter” takes her first steps towards independence.

That the girl has found herself being brought up by a dragon king and living in a village of monsters is a mystery at first. How she came to be here is slowly explained via the bedtime stories that the dragon tells her (which are actually recounts of her father’s exploits), and it is this that drives her to want to be a hero herself. So she takes her “sword” (actually a wooden stick) and sets out to help the village folk with her problems. The thing is, though, while heroism seems like a joyful game to the girl, no one around her is actually playing and the villagers are giving her very real quests that involve very real danger. The dragon king, deeply concerned for his ward but also equally keen to allow her to be her own agent of heroism, decides to carefully sneak along in the background, keeping a very watchful eye out, and subtly helping the girl from time to time when he’s needed, while the girl remains blissfully unaware of just how safe her quests truly are. 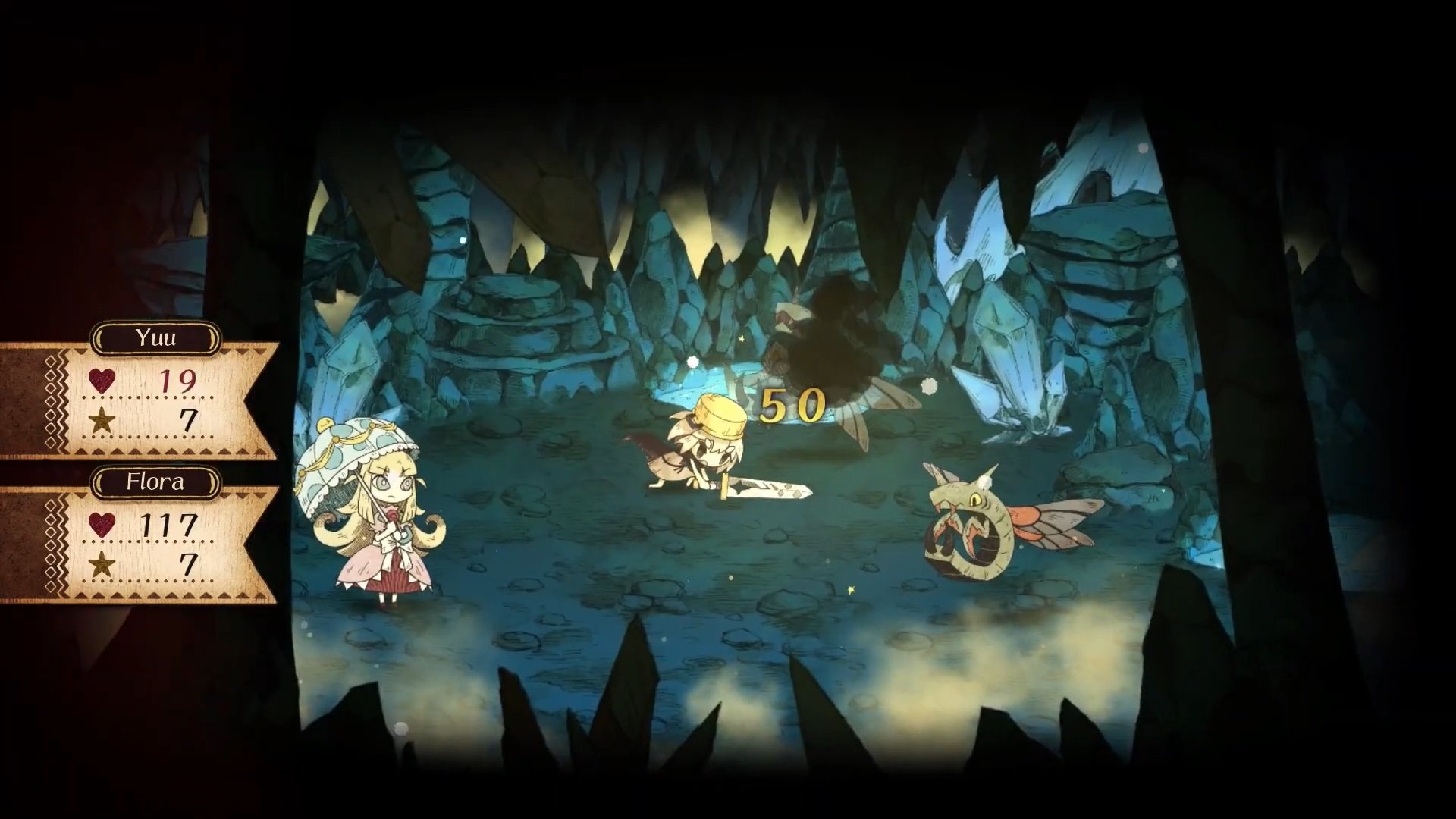 One of my very favourite examples of this happens early on. The girl earns a “flaming sword” ability as one of her first skills. However, she doesn’t actually know how to make her sword-stick burst into flame. She’s still just a little girl swinging her stick at monsters. Instead, when she activates this ability, at just the right moment, the dragon, from his hiding place in the background, breathes flame onto the stick, lighting it up and giving the girl the satisfaction of “knowing” that she has successfully used a great power. What makes this especially charming is those times where the dragon can’t follow her, because she’s ducked into an area where he can’t hide himself. In those circumstances, if she launches into her ability, her sword won’t burst into flame and she’ll be left bewildered that her powerful ability has failed her. It’s cute, funny, charming, and I love when a JRPG actually integrates the narrative into the combat system like this, rather than simply furnishing a combat system that stands independently to everything else going on.

On her adventure, the girl will team up with a range of different characters, and they’re delightfully whimsical and could have been pulled directly out of the sanatised version of the Grimms fairy tales. Mechanically, they add good variety to the combat system, in terms of their special abilities and the general presentation of them is delightful. With that being said, it does have to be acknowledged that The Cruel King has some limitations as a JRPG. Enemy patterns are fairly straightforward and shallow, and because the combat system has been simplified so much, most battles play out in the same way. Like a true retro RPG, The Cruel King becomes a “grind,” and these issues are compounded by an encounter rate that is far too aggressive (despite world sizes being fairly small). Furthermore, when the girl is in a dangerous area, her movement is also so slow that running into random encounters becomes far too frustrating for their own good. I just want to get to the other side of the bridge, damn it. Stop attacking me!

People who grew up with the early Dragon Quests and Final Fantasies (and still enjoy them) will do better with handling these frustrations than people weaned on to more modern JRPGs, but for better or for worse, The Cruel King is steadfast in its desire to be a very traditional JRPG. What just about everyone will enjoy and appreciate, however, is the storytelling. Side quests are presented as little vignettes (often with a little moral message in there, just like an Aesop fable), and the overall narrative is dripping with the nostalgic charm of vintage fairy tale tone and atmosphere. You’ll really feel for these characters because there’s so much innocence and naivety in every scene involving them, and the situations that they solve on their quests to be heroes likewise have that same quality of fairy tale whimsy and allegorical morality lecture. 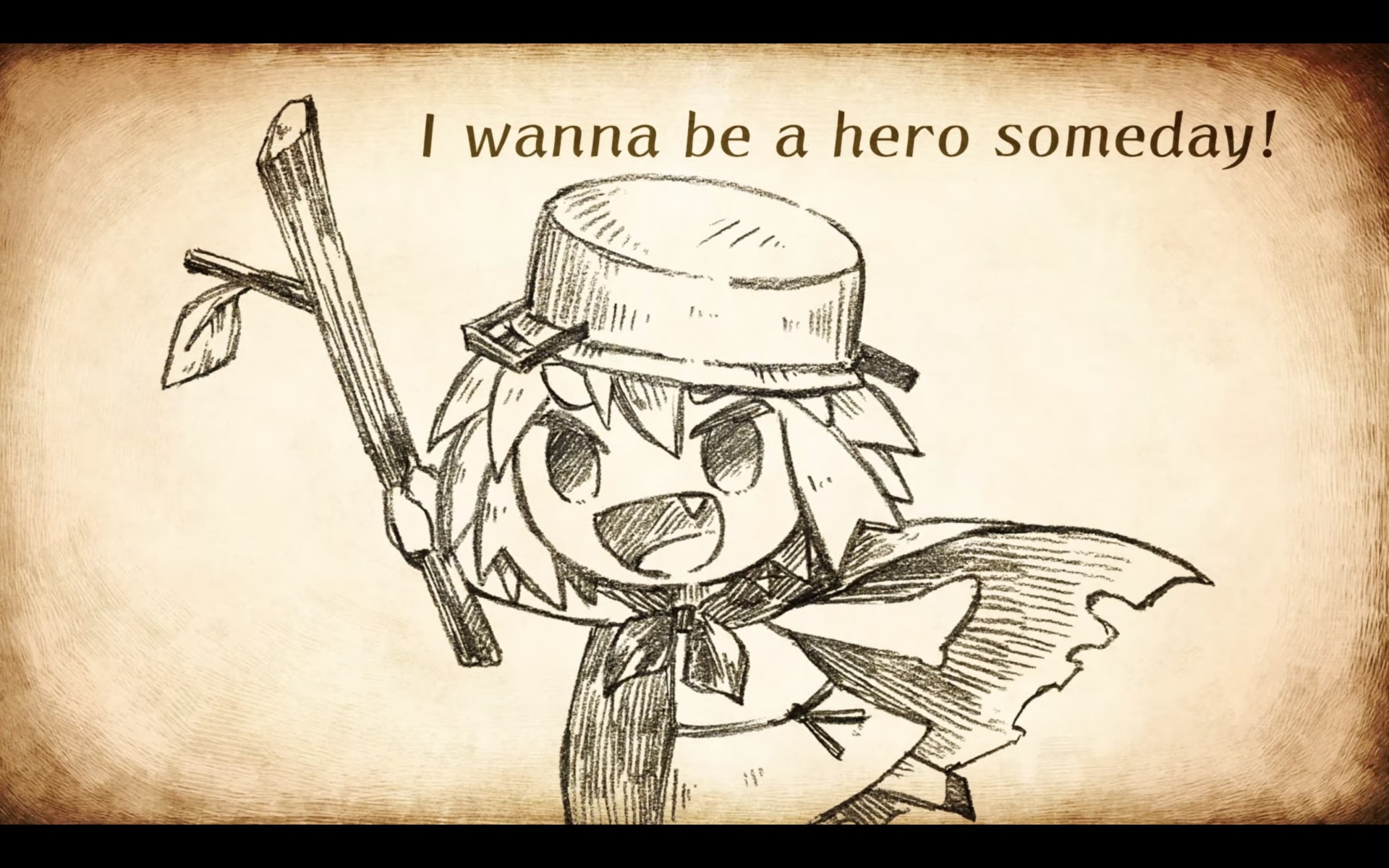 Then there’s the aesthetics. The Cruel King is one of the most glorious examples of art direction you’re going to see. The storybook-like setting takes you through familiar JRPG locations and you’ll face off against familiar JRPG enemies, but thanks to that art direction it all feels fresh and exciting. It’s also filled with all kinds of small details in both foreground and background that make moving through the relatively mundane level design far more enjoyable than you would think it would be. The animation of the characters, meanwhile, gives them a lot of personality, and the soundtrack is perfectly tailored to support the visuals and action. However, it’s the storybook narration that really sells the audio, with Shikata Akiko spot-on nailing the lullaby recital tone to describe key scenes. So much of the authenticity and sincerity of The Cruel King emanates from those recited passages.

The Cruel King And The Great Hero is a lovely and loving adaptation of everything that people love about the fairy tale, with the charming premise of a girl that dreams of being a hero, and a gold-hearted dragon that makes that happen for her. I know we’re all feeling JRPG fatigue from the sheer number of them that have been released this year, but don’t let this slip past you. It almost did me, and that would have been a big pity.