New trailer revealed for Who Pressed Mute on Uncle Marcus?

I have developed a thing about video games shot as though everyone is on a video call. It started with Five Dates (ironically, one of the actors from that will be in this too), expanded to Night Book, and now I’m always on the lookout. Who Pressed Mute on Uncle Marcus? is an interactive whodunnit FMV game. The publisher released a new trailer for the game today, via IGN. Here it is:


It’s time for an annual family quiz, a tradition that brings this very eccentric family together. Abby dreads it every year. This year is a bit different though: before it begins, Abby’s Uncle Marcus tells her that he’s been poisoned by someone in the family and is about to die. It’s up to the player to solve the mystery. The game stars Andy Buckley (The Office, Jurassic World), Abigail Hardingham (Nina Forever, The Missing), Susannah Doyle (Black Mirror, About A Boy), Robbie Kay (Once Upon a Time, Pinocchio), Georgia Small (Five Dates) and Al Weaver (The Complex).

Developed by Good Gate Media and published by Wales Interactive, Who Pressed Mute on Uncle Marcus? will be released for iOS/Android, PC/Mac via Steam, PlayStation 4, Nintendo Switch, and Xbox One on March 18 (pre-orders open March 4). It will be playable on PlayStation 5 and Xbox Series via backwards compatibility.

American McGee’s Alice being adapted into a television show

American McGee’s Alice games are basically masterpieces. Scratch that: they aremasterpieces. The first game, Alice, was released in 2000, with Alice: Madness Returns being released 2021. It was announced this week that Ted Fields’ Radar Pictures has acquired rights to the action-adventure series.

While no broadcaster or platform has been attached to the series yet, we do know David Hayter is involved, possibly as a writer. In a statement to The Hollywood Reporter, McGee says, “David Hayter brings imagination, experience, and stealth sneaking skills gained through successful missions in film, TV, and video games – a unique combination sure to make this adventure into Wonderland a successful one for the franchise and the fans. I am excited to be working with him and know the Alice fans will welcome him with mad affection.” Hayter is also known as the voice of Snake in the Metal Gear Solid series.

The game series is a twisted take on Lewis Carroll’s Alice’s Adventures in Wonderland and Through the Looking Glass. Hayter agrees, as he told The Hollywood Reporter, “American McGee’s Alice and Alice: Madness Returns game series is a groundbreaking reimagining of the classic tale. It takes you into the heart of a corrupted Wonderland and throws light into shadowy corners the world has never seen. I am beyond excited to bring this world of madness and wonder to a global audience.”

A hand-drawn adventure about a lost gibbon embarking on a dangerous journey, Gibbon: Beyond the Trees sounds like it will be incredibly touching. Players will have to master the art of swinging (branchiation), at high speed while building momentum, sometimes somersaulting and sometimes throwing themselves up up up. The movement is based on the way real gibbons swing through the trees. Here’s a trailer:


There are two ways to play: an hour-long narrative adventure, or a race to freedom in procedurally-generated liberation mode. The story is about a family of gibbons trying to survive an encroaching human threat. A variety of environments are showcased, from the jungles of Southeast Asia to the hectic human world. The game deals with, according to the description, “challenging but acute environmental topics, including deforestation, poaching, and climate change.”

It looks like The Dark Pictures Anthology is about to grow… and grow… and grow some more. There are currently three games in the series: Man of Medan (2019), Little Hope (2020), and House of Ashes (2021). The next game, The Devil in Me, is expected this year. But the developer, Supermassive Games, is already looking way into the future by trademarking five new games with logos. 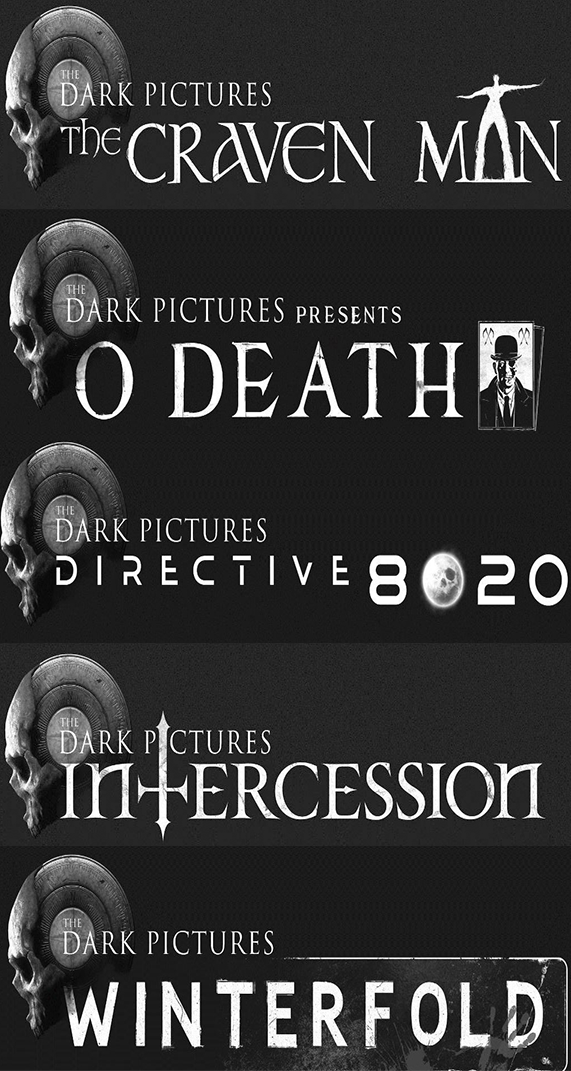 The trademarks, filed January 31, are for

What really stands out among these is the third, The Dark Pictures Presents: O Death. This is the singular time the word “presents” follows “The Dark Pictures” and I am very curious as to why.

Big things are coming to DigitallyDownloaded.net (but first some disruption)