I never knew I needed a nail polish and video game collaboration, until I learned it is actually a thing. It’s 2022, why did this take so long?! I’ve been playing video games since I was six and only now, thirty years later, can I make my nails match my games?! What is life?! There are 12 colours included in the collection. Each is named something game-themed; my favourite in both name and colour is Can’t CTRL Me, a robin’s egg blue. Each shade is also available in a handful of different polish types: GelColor (salon-only), Infinite Shine, Nail Lacquer; select shades are available as Powder Perfection (salon-only). 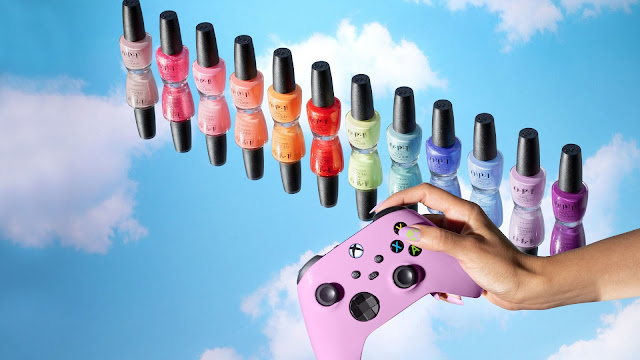 The twelve shades are:

The nail polish is available now in the United States at Ulta, and globally at various OPI retailers next month. The purchase of each polish will give players access to colour-matches cosmetic items in Halo Infinite and Forza Horizon 5. Finally, no longer biting my nails has paid off!

I’m not entire sure how I’d feel about playing a Nonogram game exclusively with a controller, but more Miku is never a bad thing so I won’t think too hard about that. A year after Hatsune Miku Logic Paint S was released for Nintendo Switch, the Nonogram game is set to come to PC and Xbox. It’s quite interesting to see a Miku game launch on Xbox before PlayStation, now that I think about it. For those unfamiliar with Nonograms, it’s a kind of puzzle where an image is created by following numbers; it’s often referred to as Picross. Here’s the launch trailer from the Nintendo Switch release:


The game includes over 350 puzzles. Compared to the mobile version, there are new 5×5, 15×15, and 20×20 puzzles. Clearing stages unlocks illustrations of Miku and friends. The player’s favourite characters will cheer them on while working on the puzzles. Clearing puzzles also earns stars, which can unlock new songs to play on the home screen or during puzzle time.

Developed and published by Crypton Future Media, Hatsune Miku Logic Paint S will be released on January 19 for PC, Xbox Series, and Xbox One. Those who pre-order will receive a slight discount. Miku Logic Paint originally released for mobile devices in early 2020. The S was added on to the title (and some new features were added) when the Nintendo Switch version launched about a year later.


Ambition Record is about a world where a count has used forbidden arts to start a rebellion. Rafael follows the king’s orders to suppress the revolt, at least until one of the king’s court members starts acting incomprehensibly. Asdivine Saga is set in a world facing a sudden war. A mercenary has to uncover the evil behind the scenes with the help of a pair of royal princesses and shinobi. Spirits can be used to enhance battle magic, and weapons can be upgraded. There are various endings that depend on the trust built with each character. Ghost Sync is about a world infested with evil beasts. A girl in on a mission to hunt the dangerous beings, and one day encounters a dog possessed by the spirit of a man. The meeting beings a long adventure. In battle, enemies can be possessed and spirits can be summoned. Guild missions will raise the player’s rank and improve their weapons. Sword of Elpisia is set in Terra, where civilisation developed because of magic tools. There are constant reports of people turning into magic swords (Boyfriend Dungeon, is that you?) and a girl named Alice chooses this fate in order to help Aldo rescue her friends.

Developed and published by Kemco (insert shocked Pikachu face here), Kemco RPG Selection Vol. 9 will be released for PlayStation 4 on April 21 in Japan. The preceding eight titles are currently available.

E3 2022 going online while GDC continues to be reckless

That’s a bit more of a loaded headline than I’d normally use, but let’s be real: any event still going forward as in-person in the coming month is being reckless. The pandemic isn’t over, people. Where I live, hospitals are overloaded, and there’s serious staffing issues in the medical field and every other as thousands of people are getting sick daily. We’re halfway to being locked down again and our politicians are basically in hiding because of the poor job they’re doing. It’s so bad we can’t even count the cases anymore. E3 is doing the right thing and shifting again based on the current state of the world; GDC, however, is still going ahead as planned in March. It’s infuriating.

So let’s focus on E3, because the Electronic Software Association (ESA) made what was surely a difficult decision in the face of current facts. A statement sent to IGN reads: “Due to the ongoing health risks surrounding COVID-19 and its potential impact on the safety of exhibitors and attendees, E3 will not be held in person in 2022.”

There is some… weirdness going on though. The ESA generally announces its E3 dates long before now, and the Twitter account has been equally silent. E3’s future has been questioned for years now, as its become more about fans and less about the industry. Two years ago, it leaked the details of over 2,000 journalists. Some large companies have been dropping out in favour of its own digital events, such as Nintendo. Still, despite all the question marks surrounding E3 2022, it does appear to be happening. I’ll keep everyone updated!