I don’t actually like Space Harrier and its ilk. Because I’m also a fan of arcade games that’s a kind of blasphemy, I know, but I am really, really bad at Space Harrier, and so it’s never clicked with me. I think it has to do with the way these games handle a “3D” perspective, as I can never quite wrap my head around how to shoot the things that I want to shoot in front of me. So with that in context, I found Top Nep – a very true-to-type Space Harrier clone – difficult to get along with.

Thankfully it’s quite the brief experience. There are only five stages and each is over in just a couple of minutes. Of course, as an arcade game, the real meat and longevity comes from trying to get those top scores on the global leaderboard, and Top Nep has a good system in place here. There are two difficulty settings, and “normal” really is quite the modest challenge. Even I could handle that one. Unlike the brutal arcade games of yesteryear, Neptunia can take a fair few hits before she’s defeated, and also recovers a chunk of health between levels. Back in the earlier days a single hit would mean “insert new coin,” and this new approach comes across as far less “cheap” for the more casual player. Furthermore, if Neptunia should run out of health there’s a continue system in place where you can sacrifice some points to continue on without losing progress. It means you won’t rank high on the leaderboard, of course, but you’ll finish the game. Then, for more experienced players that do want a challenge, as your gameplay improves, you can move on to hard mode and try and make your way up the rankings. This is how all modern arcade games should operate, and it has been handled well by the developers here.

Top Nep is also quite the looker. The sprites are nicely designed, and the boss enemies, which are drawn from well-remembered scenes from the series, are particularly impressive. The backgrounds are colourful, the range of enemies is good, and the action moves nicely. For a game that’s under Aus$10, and will run on just about any PC out there, the developers have done a good job of giving players a slick arcade action game. 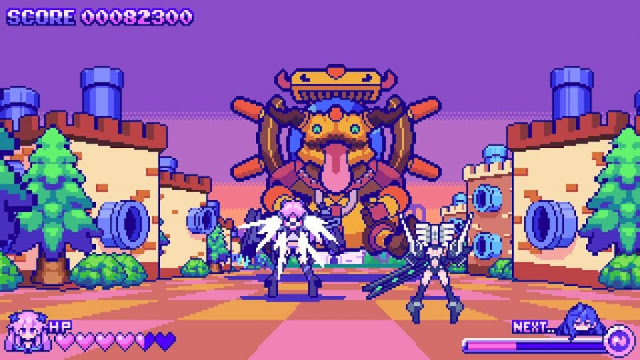 The problem is that Top Nep really struggles to be an even remotely Neptunia experience. None of the characters have any personality, for a start. Neptune might as well be the Space Harrier hero, for all the personality that she displays, and while you can, at times, call Neptune’s allies into the action, they are no more than a slightly different character model in practice. They are utterly indistinguisable from the main heroine other than the slight colour swap. Unless you’re an existing fan of the series, you’re not going to know who any of these characters are, and even if you are a fan, you probably won’t care. What is Blanc without her books and Neptune without her pudding? The answer is “not much,” and Top Nep suffers for the lack of context that it brings to the action.

There’s also absolutely no narrative to speak of, and while you might be inclined to dismiss this as a criticism on the basis that it is an arcade game, again you have to wonder about just what makes this thing a Neptunia game without it. What is a Neptune game without the silly fourth-wall-breaking cut scenes and analogy to the console wars and various games industry dramas? Not really a Neptune game, I’d suggest. I was left having my imagination better inspired by the awesome title art of Neptune standing next to her motorbike than anything that actually occurred in the game. Take that title scene and spin it into some kind of adventure game, and suddenly we have something.

I do appreciate Idea Factory’s desire to take its most valuable property and find new ways to package it up. From the attempt to make a single-player MMO, to a cross-over with Senran Kagura, and the 2D platformer/RPG, the level of experimentation that occurs with the Neptunia property is impressive, and it is something a larger publisher would rarely dream of risking. Unfortunately, I also think that Idea Factory is losing sight of what people like about the series. It’s not about the gameplay, which sounds silly but it’s a simple truth. People come to Neptunia games for the over-the-top, ridiculous humour and gloriously silly characters. Top Nep comes across as far too earnest and genuine to really work as a Neptunia game.

If you do like Space Harrier and similar, and you’re familiar enough with the Neptunia series to know the characters and enemies without needing to have them introduced to you, then Top Nep is a short burst of nostalgic-themed fun. It’s also a decent game to introduce people to the genre, thanks to the modest difficulty option, while eventually scaling to something more challenging to give the genre faithful something to sink their teeth into. I have very few issues with Top Nep as an arcade action throwback. My issue is that, as a Neptunia fan, the less-than-lip service paid to the property left the overall experience feeling humourless and soulless. For all the faults and missteps of Neptunia over the years that is something I never thought I would be saying about a game in the series.

Ah well, there is the sisters game coming later this year. I’m quite sure that’s going to be something spectacular. Nothing holds Nep Nep down for long.