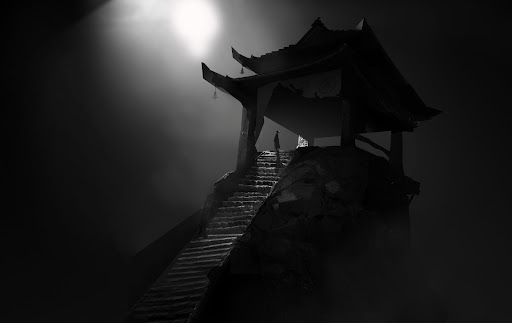 Interview by Matt S.
Leonard Menchiari makes memorable games. The Eternal Castle was a brilliantly brutal and innovative thing, and RIOT: Civil Unrest is one of those art game things that take a very sincere look at what causes humanity to flare up like that.
Menchiari’s next project is the Japanese-themed Trek to Yomi – a brooding looking 2D action game that Menchiari is working with Flying Wild Hog (the modern Shadow Warrior titles), and Devolver Digital on. He was kind to answer a couple of our questions on the thinking and goals behind the game. We also chatted with him about the Japanese themes, aesthetics and influences for an interview that will be published in the Christmas eve Dee Dee Zine (subscribe to that by supporting us on Patreon)
Matt S: Your games are certainly memorable: Both The Eternal Castle and RIOT, in particular, stuck with me as games that are really trying to push conceptual and mechanical boundaries with video games. So, naturally, I’m very keen to see that play out in Trek to Yomi. Where did the idea for the game come from?
Leonard M: That is very kind of you to say, but unfortunately I couldn’t focus on pushing conceptual and mechanical boundaries on this project like I wish I could’ve done. The game was developed in cooperation with a production team that had a very different vision from mine, so in the end we had to both adapt and come up with something that was somewhat of a middle ground of what we both had in mind.

About the original idea, I always loved samurai movies such as the Seven Samurai, Yojimbo, or other Akira Kurosawa films. One day me and my partner came up with the idea, so I decided to set up a playable prototype that could allow us to play as a Japanese swordsman and slash our way through enemies. After a couple of weeks of me and a friend playing around with the concept while working remotely, the results turned out to be more interesting than we thought, so I decided to focus my energies on it and make something more complete out of it. Eventually I pitched the idea and teamed up with Devolver Digital, who provided an amazing writer and a production team at Flying Wild Hog; about a year and a half later we were all able to come up with what we have today.

Even if the final result ended up being somewhat different from what I initially envisioned, the cinematic feel and visual aspect of it remained the key points that made this whole project stand out to me and which in the end I am the most proud of. 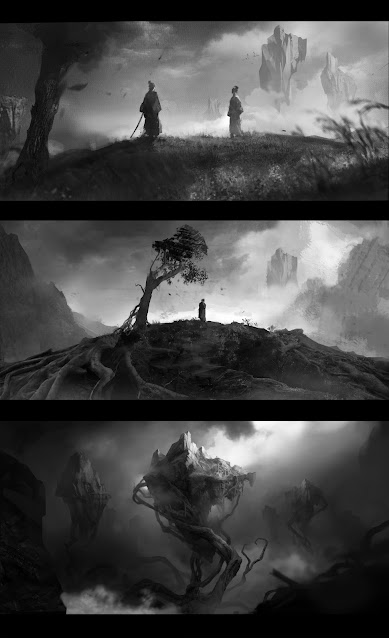 Matt S: Are you going to brutalise players with difficulty like you did with The Eternal Castle? But more seriously, did the response that you got to that game teach you anything about difficulty in video games that we might see applies to Yomi?
Leonard M: Unfortunately, despite all my heavy attempts to direct the gameplay into something more interesting and unique, I wasn’t able to recreate the authenticity of samurai fighting through the initial gameplay vision that I initially had in mind. The team had their own very solid idea about how the gameplay should turn out to be, so they eventually ended up making something more standard and old-school rather than really capturing the true Musashi-like authentic samurai-feel that I wish we could’ve gone for. So when it comes down to gameplay, and especially balancing, I could only do so much. The results are a mix of my initial vision, and a more safe classic indie-game approach, which in the end should probably appeal to broader audiences despite not being as impactful and interesting as it could’ve been.

In the future though, I will definitely keep learning from my previous mistakes and experiences, but most importantly, I hope that in future projects I will be able to keep experimenting and pushing the boundaries towards different emotions and innovative experiences, rather than sticking to the same old repetitive stuff that we keep seeing all the time, and that somehow still keeps coming out despite our great need for variety.

DDNet Game of the Year Awards 2021! Best on Console