With every generation, PlayStation consoles give us many classic games and do their bit to push the industry forward. Now that we’re in the full swing of the 5th generation of the console, we thought we’d put this poll question to you: which generation of PlayStation do you think has been the best? 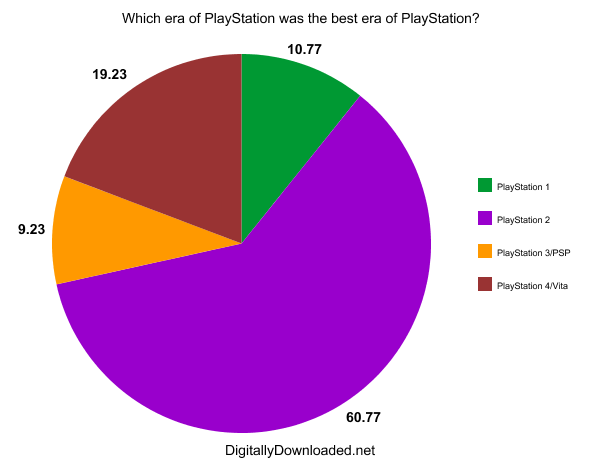 The results for this one actually surprised me, because the PlayStation 2 came out much further ahead than I thought it would. When I set up this poll I did expect the PlayStation 2 to win, but with perhaps 40 per cent or so of the vote. Securing 60.77 per cent just goes to show how transformative that console was.

The PlayStation 2 took everything that developers learned from the PlayStation 1, in terms of 3D graphics and the capabilities of disc-based consoles, and refined it to the point that, to this day, so many PlayStation 2 games are as playable as modern titles. The PlayStation 1’s primitive 3D experiences make many of those games hard to play today (though in recognising just how innovative that console was, 10.77 per cent of people still voted for it), but the PlayStation 2 modernised it and really set the industry on the course that it has since taken.
The PlayStation 3 AND PSP only securing 9.23 per cent of the vote was also a little surprising, given that the PS3 brought some big innovations of its own (including the PlayStation Network and full-size downloadable games to console for the first time), and the PSP is an incredible little system with a great line-up of games. For instance, I know, personally, that the emulation community goes gaga over Chinese emulation consoles that can do PSP well. Perhaps the low vote was simply because those two consoles represented a generation that was, simply, stuck, between the mind-blowing impact of the PlayStation 2 and the sheer quality of the PlayStation 4 and Vita.
Speaking of which, the PS4/Vita did come in at second with nearly one-quarter of the vote (19.23 per cent). Interestingly, the PS4 did much better on the YouTube version of the poll than the Twitter version, and I think that might have something to do with the YouTube audience skewing slightly younger. The PS4 and Vita are exceptional, modern consoles, of course, so if you’re not as inclined towards nostalgia, the games that were released on that will prove to be more compelling.
But as to whether anything ever beats the beloved PlayStation 2, now or into the future, who knows?

November 2021 Podcast: Nintendo 64, Pokémon, and a whole pile of games