The controller is so critical to the gameplay experience. It is, after all, how we interact with a game, so how it feels in our hands, how responsive it is to the games we like to play, and how comfortable it is over long periods of time is of critical importance. It, therefore, goes without saying that the console manufacturers spend a great deal of investment in making controllers that work for their audiences. This week we canvassed the community to find out which controllers were their favourites. 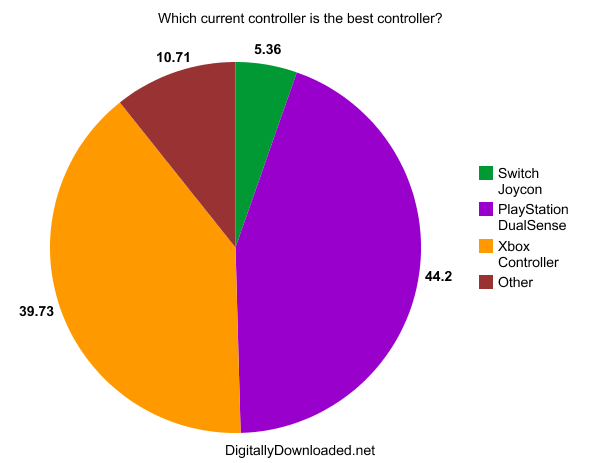 Somewhat incredibly, this result is much more balanced between the three manufacturers than you might think at a quick glance at the graph there. It looks like the Switch (and Nintendo) and languishing in a very distant third, but the “other” category is almost exclusively the result of people voting for the Pro controller. People might not like the Joycons that are attached to the Switch in portable mode much, but they do like the feeling of the wireless controller for docked play. I had assumed that the “other” category would be a minor few voting for 8BitDo and other third-party controller options, but as it turns out it lifted Nintendo’s overall vote to around 16 per cent.
That sounds about right to me. The Joycons are infamous for their “drift” issues, and the Pro controller isn’t used by every single person with a Switch. I’ve personally gone through four sets of Joycons since I first purchased a Switch. I do think they work well enough for gaming on the go (and the Switch is my preferred console for that flexibility), but I certainly think both Sony and Microsoft have done better with their respective controllers.
What is also interesting is that there was a split between the two places I place these polls and the results generated. On Twitter, where I have a broader gaming audience, the Xbox controller actually got more votes, but over on YouTube (where I don’t cover Xbox at all) the PlayStation DualSense won, overwhelmingly.
Naturally, you will be more inclined to prefer the controller of the console that you prefer. I think, overall, we can consider that the PlayStation and Xbox controllers are at approximate parity, and Nintendo has a bit of catching up to do with whatever comes after the Switch to reclaim the status that it once enjoyed as having the most innovative, interesting, and comfortable controllers.