We’re moving into the awards season now, so as always it’s time to look back at the year that was and consider how it stacked up, in terms of quality and quantity of the games being released. Based on these poll results, it would seem to have been a very good year for games indeed (at least, for the DDNet audience, which means Japanese, indie and arthouse game fans). 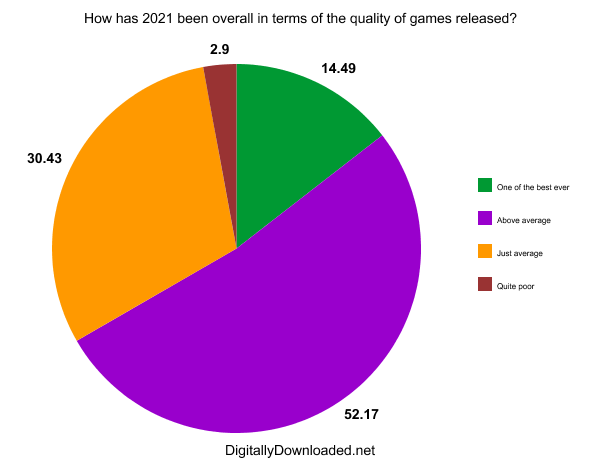 Two-thirds of the people that voted in the poll said that the year was either “above average” (52.17 per cent), or “one of the best years for games ever (14.49 per cent). While you could argue that it has been a relatively soft year for the big blockbuster experiences, the Japanese games industry had a particularly good year, with a seemingly endless parade of high-quality JRPGs and other such things to enjoy.
Only 2.9 per cent of respondents said that the year was “poor” for games, too. Certainly, there have been some very poor games released (e-Football was a disaster this year, and so too has been the GTA collection), but even despite the ongoing disruptions from COVID to workflows, game developers of all sizes have found a way to deliver us that all-important escapism in this difficult time.
In fact, you could probably argue that because there haven’t been quite so many blockbuster experiences, people have been forced to focus on the “B-tier” and indie game scene, and as a result they’ve been able to discover games that they might not have otherwise. It has been refreshing to see the conversations cover a broader range of games this year, I tell you what.
Let me know your own thoughts about the games of 2021 – have there been any particular highlights that you’d like to point at?

Release date and details for the A Week on the Water Dee Dee visual novel!