As part of the celebration of 20 years of Xbox, Microsoft has today announced that some 70+ new Xbox and Xbox 360 games have been added to its backwards compatibility list, allowing you to continue playing those games on the newer generation devices.

This list has some real hits in it, including (but by no means limited to): Dead or Alive Ultimate, 3 and 4, the Max Payne series, Otagi (i.e. what FromSoftware did before Souls), NieR, Onechanbara Bikini Samurai Squad, Sacred 2, Risen and Risen 2, a bunch of Star Wars games, and the F.E.A.R series.

I must stress that this is a really good thing that Microsoft has done, to bring so much of the back catalogue and make it playable and accessible on modern devices. This is how preservation should work, and I strongly encourage people to support Microsoft in return and purchase these games, rather than access them through other means. 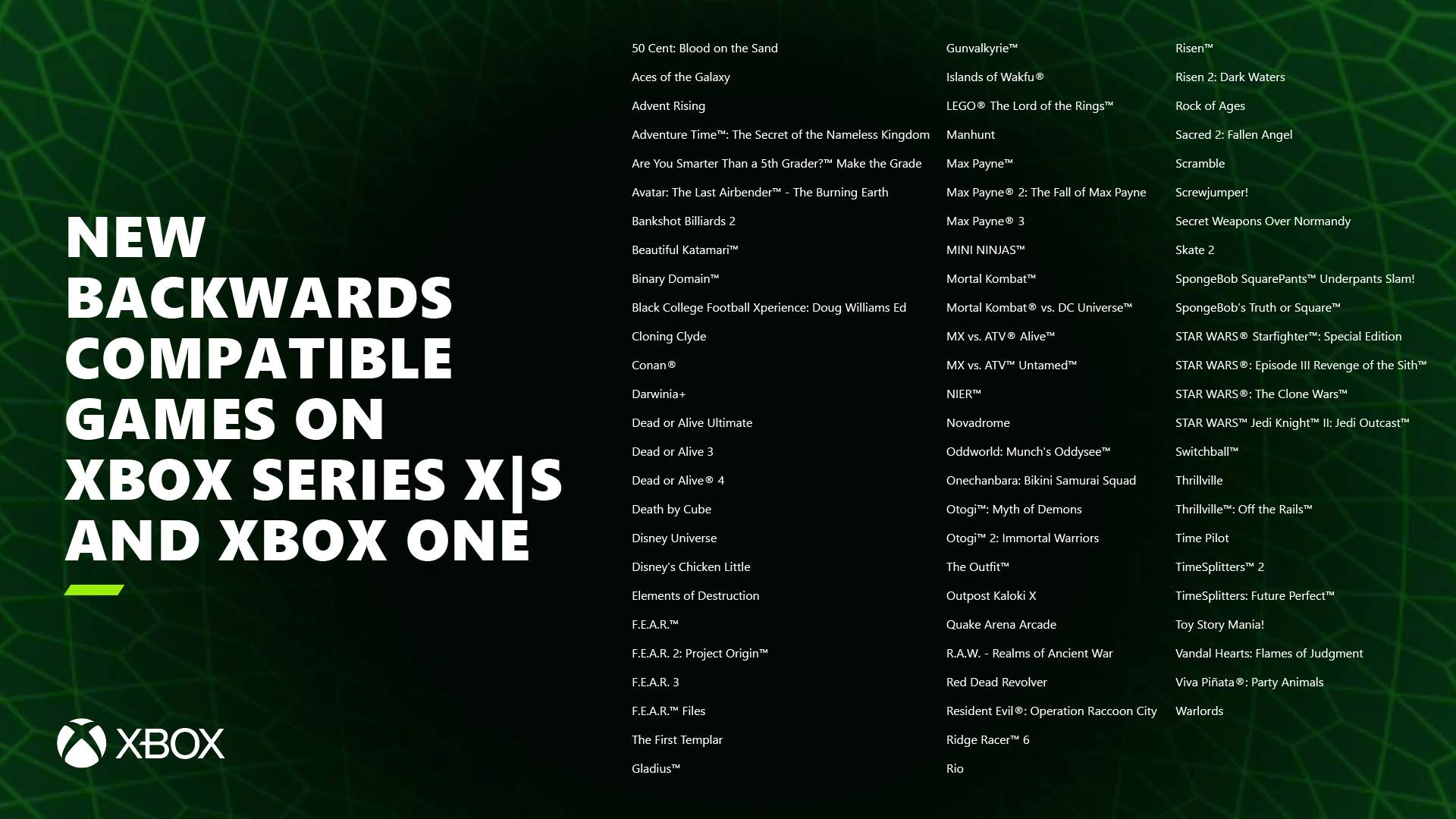 However, this is also the last drop of new games via backwards compatibility. As noted by Microsoft: “While we continue to stay focused on preserving & enhancing the art form of games, we reached the limit of our ability to bring new games to the catalogue from the past due to licensing, legal & technical constraints.”

And in fairness, this is entirely believable. Games do go out of license. Consider EA’s Lord of the Rings titles, as one example. EA no longer holds the license to those games so it couldn’t re-release them even if it wanted to. At other times parts of the game go out of license, making the entire game impossible to republish. The licensed music in games like Lollipop Chainsaw, Dead or Alive Xtreme, and others are an example of this. Short of going through the expense of re-licensing all that expensive music, the games would need to be edited to put non-licensed music in, and that would impact on the aesthetics and qualities of those games.

So, despite Microsoft’s best efforts to preserve these older games (and I really, genuinely, believe that it’s a best-effort project by the company) we are still at risk of losing some (many) incredible works of art, because the capitalistic system that the art exists in would rather see the art disappear than concessions made to preserve it at the cost of some marginal financial interests.

We’re at the point now where anything that exists outside of what’s available on backwards compatibility will never be available again. That is, surely, the last barrier to argue against the “piracy” of the remaining games (I do have to wonder if “piracy” is the right word if the games have been effectively abandoned… I prefer to characterise it as striaghtforward preservation in this context). If we’ve got a choice between Lollipop Chainsaw being preserved, and Lollipop Chainsaw not being preserved, then surely preserving Lollipop Chainsaw is the right and moral action.

In so many ways Microsoft’s project to preserve its history and heritage has exposed just how much we’re at risk of losing in this industry. Just looking at the Xbox 360 alone, before today’s announcement, there were only 580 or so games available on backwards compatibility, of around 2,200 games that were released on that console. Less than 100 games from a library of over 1,000 on the original Xbox.

Now, some of those games have been preserved in other ways (two of my favourite Xbox original games, Kingdom Under Fire and its sequel, are not on backwards compatibility, but got HD re-releases on Steam), but even taking that into account, more than half the games from these consoles are going to be lost, even with Microsoft’s genuine commitment to preserving them. That is unacceptable. That’s early era cinema preservation bad, and the fact that this industry has allowed commercial interests to repeat that artistic mass extinction is just the reminder that we all need that piracy isn’t just a way to play otherwise inaccessible games, it’s like setting up a zoo of your own so the endangered species are not just left to die off because the zoo keepers ran out of ways to make money from them.

Release date and details for the A Week on the Water Dee Dee visual novel!