Animal Crossing fans have been whining for ages that the game seems to have been forgotten about by Nintendo (I mean, I don’t blame them, but it was still whining). During a Nintendo Direct focusing on Animal Crossing, all the information was revealed about the free Version 2.0 update. Brewster will finally open his darned café, something players absolutely cannot live without. Kapp’n will be giving boat tours to remote islands. In addition to fossils, gyroids will be available to dig up from the ground. Harv’s island is getting a boost with new shops from Redd, Sahara, and Kicks. Cooking will be added to DIY recipes; after growing good in the garden ingredients you can combine them to adorn your dining table with a smattering of dishes. Other additions include bigger home storage and new ordinances.


In other Animal Crossing news, DLC is coming! Happy Home Paradise will cost US$24.99. Players will join the Paradise Planning team and have the opportunity to design vacation homes for visitors after choose a location in the archipelago. The more players progress, the more they’ll be able to do: imagine adding partition walls, counters, and ambient lighting! With progression, players will also unlock new furniture. The island needs amenities, too, so Lottie will ask about designs for places like a school and a restaurant. New clients can be invited using Amiibo cards (and yes, series five is coming). A trailer can be watched over on Nintendo’s YouTube channel, or click here.

Surprisingly, Nintendo used the Animal Crossing Direct to announce information about the Nintendo Switch Online + Expansion Pack. Originally announced last month, the expanded online membership includes access to a library of Nintendo 64 and Sega Genesis games (controllers can be purchased separately). A lot of the focus seems to be on the N64 titles, so let’s take a closer look at that. At launch (sometime later this month), nine titles will be available: Dr. Mario 64, Mario Kart 64, Mario Tennis 64, Sin and Punishment, Star Fox 64, Super Mario 64, The Legend of Zelda: Ocarina of Time, WinBack, and Yoshi’s story. Games that will eventually be included are Banjo-Kazooie, F-Zero X, Kirby 64: The Crystal Shards, Mario Golf, Paper Mario, Pokémon Snap, The Legend of Zelda: Majora’s Mask. The membership will cost US$49.99 per year for an individual, or US$79.99 per year for a family.

Where Cards Fall expands from AA to PC

Until now, slice-of-life puzzle game Where Cards Fall has only been available for Apple Arcade, but last week it was announced that the title will also be coming to PC next month. The game involves building houses of cards to bring formative memories to life. There is actually zero dialogue; the story is able to be told without it. Here’s the trailer to go with the announcement:


The game features over 50 special puzzles that require imagination and strategy to complete. The visual style is inspired by contemporary artistic movements. For the PC release, there are innovative gestural controls for mouse and controller.

Developed by The Game Band and published by Snowman, Where cards Fall will be released on November 4 for PC via Steam/Epic. The game is currently available via Apple Arcade, where it launched just over two years ago.

We’ve seen the world of Gamindustry in many forms, the most popular being in the RPG genre. Dimension Tripper Neptune: TOP NEP changes that, and combines the familiar characters with new gameplay. That’s right, it’s a rail shooter! There’s no trailer yet, but here’s a glimpse at the game: 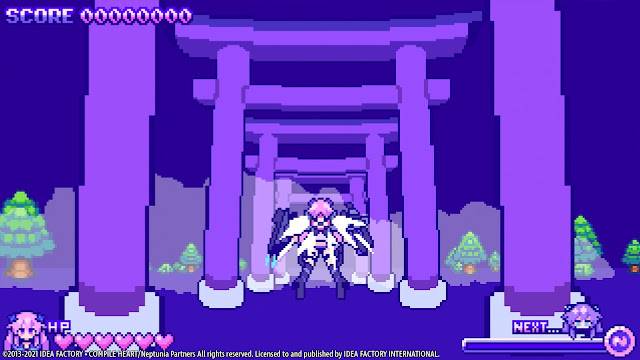 Older Neptune take to the skies with her Generator Unit. There are five stages and bosses, each based on the greatest Gamindustry nations. If players gather enough coins on each stage, a friend will appear to assist with attacks; there are nine friends to unlock. Keep an eye out though, as obstacles, bullets, and enemies can all deplete your HP. Once all your lives are gone, you’re done!

Developed by Frontier Works and published by Idea Factory International, Dimension Tripper Neptune: TOP NEP will be released early next year for PC via Steam. It will include both English and Japanese language options.

I have no idea how I didn’t know that Disney Magical World even existed, because Disney combined with a sim is right up my alley. The social sim brings players into the worlds of Disney films we grew up with – there are six worlds in total, including Frozen. Of course, well-known Disney characters will be around, such as Mickey, Donald, and Goofy. Here’s a trailer:


Portals bring the player to the six special worlds, and otherwise play takes place in Castleton. Players will run their own café, trying to make all cartoon customers happy. The café can be decorated, as can the playerThere are dungeons to defeat, and winning will earn gems to use at the castle. Gather a materials to craft accessories, furniture, clothes, and food. Avatars are complete customisable, from hair to clothing.

Developed and published by Bandai Namco, Disney Magical World 2: Enchanted Edition will be released in the west on December 3 for Nintendo Switch. In Asia, the game will launch one day sooner, on December 2.

The Caligula Effect 2: The sequel to the greatest game no-one played