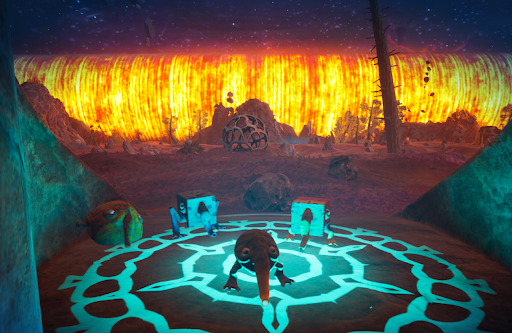 Review by Lindsay M.
I wasn’t entirely sure what to expect when I picked up a controller to play The Eternal Cylinder for the first time. The trailers show a weird and wonderful world that is also quite scary because, well, a giant rolling cylinder is about to crush you unless you get far enough, fast enough. What I found was something sad yet pleasant, something easy to learn yet featuring some complex environmental puzzles. What I found was delightful, in a kind of profound way due to the emotions the game evokes.

The game’s protagonists are Trebhums. They make cute little faces and cute little sounds and I love them all as though they are my own children. I’ve become fiercely emotionally involved, and it happened fast. We begin with one Trebhum, awakening alone in an unknown world. The world is odd; it’s extremely strange and surreal, and yet somehow familiar and comforting. I mean, “comforting” other than the things that are trying to eat your Trebhums or the giant cylinder is trying to crush them, of course. There are four biomes: savannah, tundra, desert, and infected (basically, lush, cold, hot and sandy, and very dangerous).

While the rolling cylinder is eternal, it doesn’t roll eternally. There are towers that will prevent it from budging. While that is the case, the area behind the tower can be explored. Then there’s a filmy-like wall in certain places, and crossing that is what makes the cylinder start rolling again. The cylinder stops rolling as long as the Trebhum(s) makes it to the relevant tower in time. It’s like a stop-and-go game of life-or-death tag, in other words. The concept seems strange on the surface – and certainly the presentation of it all is otherworldly, but thematically it’s pretty clear what this is all on about: ACE Team captures a lot of the emotions I feel around climate change and feeling like we are in a race against time to do right by the world, lest it will kill us all. Yes, it sounds a tad dramatic, but it is dramatic.


So, if you don’t like really thoughtful games, The Eternal Cylinder is not for you. Not just for the dense theme, but there are dozens of things that need to be remembered while you play, like how the stomach works or what abilities any given Trebhum has. I’m not going to lie, I probably missed or forgot some really obvious things, and that would in turn have made my experience more difficult than it needed to be. The important thing is that it was never unplayable, and I never threw my hands up in frustration. There’s something special found in just wandering around trying to figure out what the next move is. This is backed by the stunning environments and strange creatures, which are always a treat.

I spend a good part of the time playing being confused about where to go or what to do or how not to die courtesy of things like poisonous vapour. I never found myself mad at the game, though, because the confusion is genuinely part of the story: the confusion is normal because the Trebhum have just been born into something brand new, with no guidance as to how to navigate the world or what their family’s past may be. It’s a hostile world that they’re babies within. There’s poisonous gas pits, one of which killed three of my four Trebhums in one go, once. There are also beasts that will try to nom the Trebhums (which is fun to say). Blue beams of light guide the player to where they should be looking, and patches of blue gas around a blue plant light the way to the next tower. There are also loads of explanatory pages, so though the game does want the unknown to be core to the experience it also expertly holds your hand when it needs to and gives you the information you need to play.

There’s also a mutation system at play, and that is based on what your Trebhums eat. There are mutations such as growing fly-attracting hair, becoming a cube, or opening a third eye. They happen when you’ll need something specific to continue onward with the narrative (and away from the cylinder). Trebhums suck up things in the environment, ranging from food and water to mutations and eggs containing other Trebhums. Environmental puzzles generally consist of finding eggs and getting them to a heat source to hatch new Trebhums. 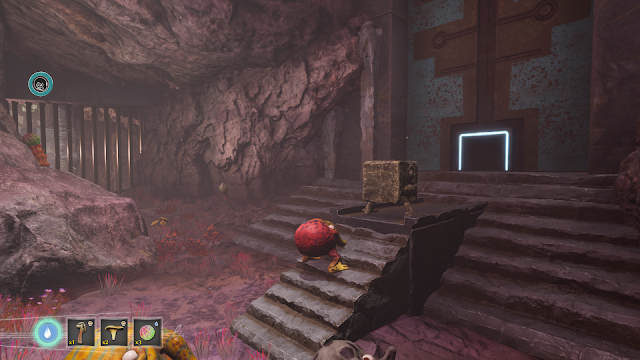 Despite being chill in terms of the time players can take to complete sections of the world, there’s this inherent anxiety about it. Even just thinking about it, I get a bit more anxious. It definitely stems from the fear of the unknown and the fear of messing up. Others may find it more soothing because it isn’t designed to be a time-pressure game. Either way, though, the anxiety I experienced isn’t bad. Based on what’s happening in the game, it’s thematically reasonable and appropriate.

The core of making games accessible sits in the settings menu. It’s a blessing for those that need to remap buttons, change subtitle text, or select a different difficulty. The thing is, the settings menu in The Eternal Cylinder is the most ludicrous menu I’ve seen in quite some time. The text is minuscule at best, basically impossible to read. Granted, I do need new glasses, but this is still unacceptably tiny considering I was four feet away from a 39″ screen. If we can’t access the options that make the game accessible, what’s the point? I strongly believe that a good UI is integral to user experience and enjoyment of the game, and with a menu like this… it’s frustrating to say the least. It doesn’t entirely ruin the experience but that is an area for ACE Team – an otherwise talented, well-meaning group – to consider for the future.

The Eternal Cylinder is quite sad yet somehow there is a delight in finding in the smaller moments: finding an egg and evolving are especially happy moments. It is complex yet simple, running from the big bad thing that constantly looms like the Sword of Damocles is easy enough, but exploring to find the way ahead isn’t always completely straightforward. The opposite emotions make the game feel deeply fulfilling. It’s not quite like anything else I’ve ever experienced, and I feel like it will haunt me (in the best way possible) for quite some time to come.