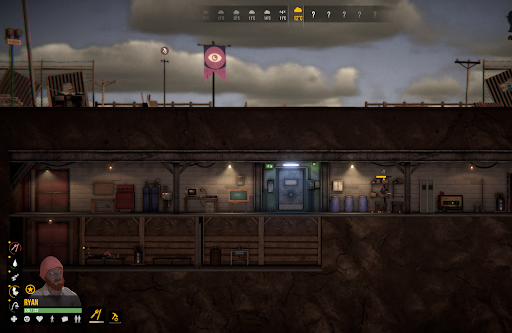 Review by Lindsay M.
It’s been six years since the original Sheltered launched. The game came out around the same time as Fallout Shelter, and shares enough superficial similarities as to be comparable, although with a premium price rather than a free-to-play model. I was worried it wouldn’t be successful, but it was well-received to some degree (it currently sits at 62 for the PC version on Metacritic). The developers decided to try again by basically adding one massive element to what was already there. But is that one element enough to change the middling reviews?

The first Sheltered game was kind of a combination of the story of Fallout Shelter and the gameplay of This War of Mine (the latter of which I will reference consistently through this review). Sheltered 2 takes the base of the original game and adds factions, groups of people who live and work together while being wary of anyone from opposing groups. Twenty-six years have passed since the world was destroyed. A handful of factions remain, including the player’s. Where the story goes from there is up in the air. Factions could unite and help each other, or go to war and conquer one another until only the strongest remains.

Before beginning anything, a faction must be created beginning with a name. Each faction has one or more fully customisable characters. Players can customise each character’s name, body, features, hair, accessories, clothes, stats, and traits. The faction flag is also custom-designed, although all of these things can also be randomly generated. It’s all relatively simple and intuitive, as it’s based on the same system used in a ridiculous amount of titles to date. The options aren’t extensive, but there’s an acceptable amount of variety. A character’s stats can impact the quality of what they do or build. For example, intelligence helps when crafting items from the drafting table. As such, be careful when deciding who has what and try to be sure someone is always high on a stat others may lack!


Sheltered 2 does not use a controller; rather, it uses a mouse/keyboard combination. It’s not ideal for me, pain-wise, but once I actually played the game I understood that making it controller-compatible will take an awful lot of time and effort. There’s a lot of written instructions, so many there’s no chance in hell I would remember them all and have some glaring omissions in my memory of how to do certain tasks. For example, I don’t know how to bring a character’s health from 50 back to 100, so all I can do is try a bunch of different things and hope for the best. There is extensive information on factions (outside groups), expeditions, and crafting. Honestly, it’s just a bit much for me. It’s difficult because I can see why it would appeal to so many, but my brain is just not capable of storing all that information – it’s too busy remembering things like how to spell an American Ninja Warrior contestant’s last name. Basically, my brain already feels stuffed full, and adding heaps of information all at once is not going to allow it to settle.

The game combines systems from titles such as The Sims, Fallout Shelter, and This War of Mine. All characters have basic needs to look after, including sleeping, eating, drinking, bathing, and using the toilet. Once these things are taken care of, it opens up these characters to do other things, such as build/craft items, garden, repair machinery or items, or go out on expeditions to the outside world. Characters can get sick or hurt; in these cases, there are medicines or devices able to help bring them back to normal. They do sometimes interact with each other, although sparingly and often negatively. When the player sets up a string of tasks for one character, each one can be cancelled by simply clicking it.

Characters can be set up to take care of their own basic needs, with the player choosing whether or they they ignore said needs, do something at 50 per cent, or do something at 75 per cent. It is super helpful because then you know someone isn’t going to, say, dine of starvation because you forgot to check on them. I really like being able to set the specific level as to preserve inventory, especially for food and water. 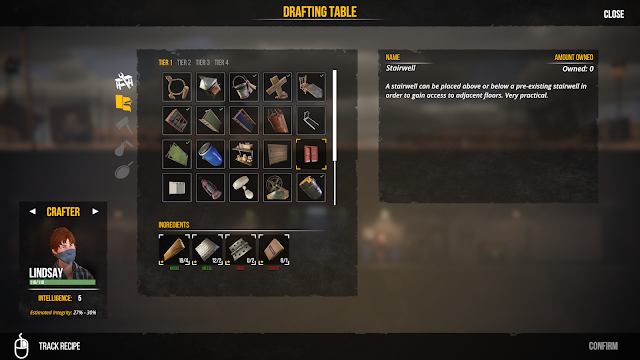 Crafting works on two levels. On one hand, there’s the drafting table. This is where furniture, hygiene tools, heating elements, cooking elements, and more can be created. On the other, there’s the workbench where items can be made or recycled; items made here are often needed for things created at the drafting table, so there’s a cyclical nature.

Sometimes you can recruit wanderers into your faction; they just appear at the front door and ask to join. They won’t be fully loyal at first, but it’ll get there with time. Outside the walls of the shelter, there is a lot of nothing and six other factions. Once you meet factions in the wild, you can speak to them via the radio to request jobs and trades, or accept special quests.

To meet other factions, characters have to go out on expeditions. Players are presented with a hexagon game board, and choose where the expedition will go. I often try to hit a couple of spots, whether there is something to explore, a good likelihood of people, or apparently nothing. Then return home, rest up, and repeat. Expeditions are the best way to get materials and gain insight into other factions. Expeditions are the only part of everything that is relatively straightforward, which I very much appreciated. My biggest complaint is that the map’s scrolling is a bit wonky, and that’s nothing. 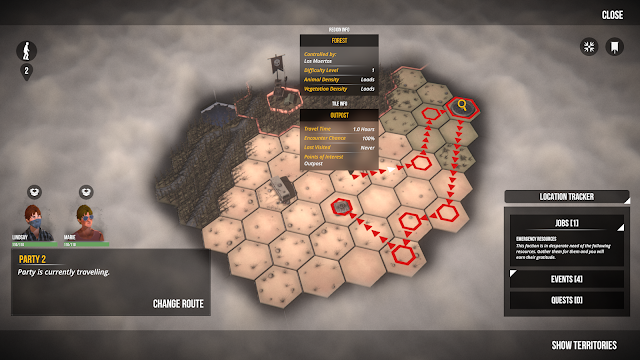 Sheltered 2 wants to be This War of Mine but narratively, it completely fails. This War of Mine makes players really care about the characters, giving them all specific and sad backstories. The characters in Sheltered 2 are either randomly or user-generated, and that gives them stats and such but no real story past “the world is ending, let’s try to strategically not die.” In This War of Mine, you play character-specific stories. And these characters are the ones you may encounter in other stories, so you often know their entire tale before they step foot in the house. The narrative has layers. The narrative in Sheltered 2, again, is “the world is ending, let’s try to strategically not die.” The outside characters have no backstory. The other factions don’t have much of a backstory, although there are some tidbits there that give us a small amount of narrative.

That being said, the options for gameplay in Sheltered 2 are a vast improvement over those in This War of Mine. Players have many more options for things to craft or build, and everything built will always need repair at some point. It would probably play quite well on mobile devices with a tap interface.

What I’m about to bring up may seem petty, but it’s one of my video game pet peeves so I just can’t ignore it. When typing, such as faction or character names, everything is only displayed in all-caps. This would be fine except, later on, they’re not. I accidentally have capslock on at one point, so what should be “LINDSAY” appears as “lINDSAY.” It’s finicky, yes, but can’t the devs just make it all all-caps so it’s a non-issue? It’s quite the immersion breaker to have names that only Elon Musk would call his children being sprayed across the screen. 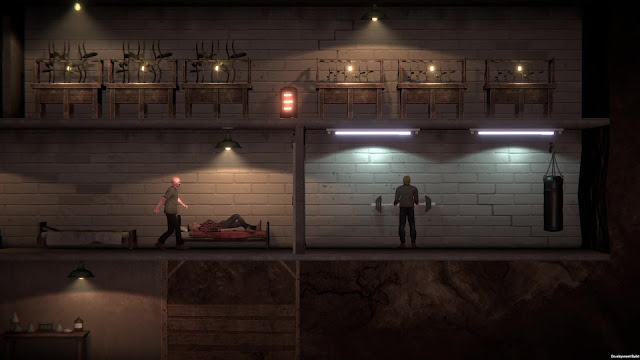 On the surface, Sheltered 2 looks great. The formula: take the original title and add factions. Easy, right? It seems easy enough until the pages and pages of information pop-ups appear, expecting players to remember everything immediately or else get stuck. I’d describe it as a cognitive nightmare. Back at the beginning of this review, I wondered if adding factions is enough to change the middle reviews that Sheltered received. In my case, it does not. It’s fun enough in a sim/management way, but the post-apocalyptic thing has been repeated what feels like infinitely and lacks originality, and factions just complicate the game to the point there’s no more room in my brain for information to remain there. There is very little to become emotionally attached to. The result? A middling review.