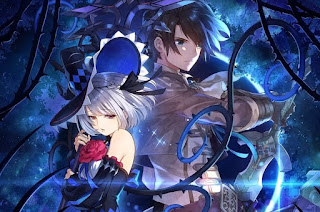 Dragon Star Varnir is one of Idea Factory’s deeper and more intelligent titles. Belonging to the same experimental series (unrelated to one another, but conceptually similar) as Fairy Fencer F and Death end re:Quest, Varnir is certainly dark and brooding, and subversively feminist in a way that will challenge players’ critical thinking to look past the extensive fan service, but if you can meet it on its level, it’s a game that will stay with you.

First, though, we do need to mention the Switch port, because as is usual for Idea Factory ports to the console, there’s a noticeable drop in fidelity. Playing it in handheld mode, in particular, introduces the same fuzziness that dominated the other Idea Factory ports, which does tend to undermine those skimpy costume changes and short skirts that are a big part of the game’s fanservice. Given that that plays a thematic role in this particular game, this drop in fidelity does have a substantial impact on the game.

More practically, too, the frame rate is as shocking as it typically is with Compile Heart RPGs on Switch. Wandering around the world and shifting the camera causes noticeable stutter, and as we all know, this bugs (hah) some people. The reality is, of course, that this doesn’t affect what it’s like to play Dragon Star Varnir on any level. The game has a turn-based combat system, and the narrative itself is largely delivered through visual novel-style cut scenes. The bit that is most affected by these frame rates – the world traversal – is really so irrelevant to the game’s qualities. 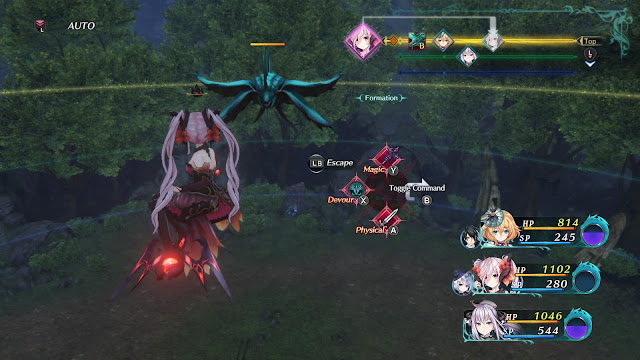 And what qualities those are! The main one is the narrative, and to borrow from my own review of the game on PlayStation 4: Right from the start, Dragon Star Varnir makes its Grimm-style fairy tale roots quite explicit; we have here a world of feared witches, dark forests, and magic. Almost immediately, the game also adopts particular thematic concepts that were common to tales by the Brothers Grimm. As noted by Rebecca Cicalese in a paper on the socio-cultural context of the Grimm tales: “When one thinks of fairy tales, one imagines child-friendly stories of kings and queens living happily ever after in their castles, surrounded by beautiful landscape and adorning servants. One does not imagine horrific violence in the tales being used to inform society about the evils of capitalism and commodity exchange, which is the tactic used by the Grimm Brothers. The fairy tales written by the Grimm Brothers were meant not for children, but for adults, in an effort to open their eyes to all that is happening within society.”

Dragon Star Varnir opens up in a similar context. The protagonists – the witches – are mercilessly hunted by the knights in shining armour for their supposed association with dragons, which are the monsters that plague the world. But this is all a lie. The knights belong to an elite order, portrayed as decadent in its wealth and religious hubris, while the witches represent a cursed (literally and figuratively) class that needs to contend not only with persecution from the elite, but also survival struggles within their own class.

Witches need to consume dragon meat in order to survive. Those that don’t are driven insane. Those that do eventually have a dragon grow inside them and erupt out, killing them in a grisly metaphor for childbirth. In other words, the curse’s effect is to turn these women into a commodity – an inherently oppressive system that is built around using women for the benefit of others over themselves. This echoes another of Cicalese’s analysis of the Grimm tales: “In these fairy tales, society is based on the exchange value of objects, such as women, for other material possessions, which indicates that in a capitalistic society, women are only valuable as long as they can offer men some sort of service.” 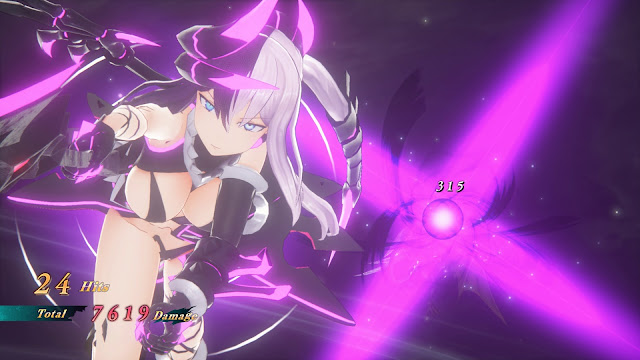 The quest in Dragon Star Varnir is to understand the root cause of the curse and then break it, so that the women can become human and earn autonomy over their bodies. And so they (along with one male who becomes a “witch” after consuming some dragon blood early on), set off on a journey that, every step of the way, calls to mind not only the themes and storytelling of the Grimm brothers, but also the aesthetics and tone that is so familiar to their work. The writers and artists at Idea Factory consistently demonstrate a deep understanding of this genre and tone, and use it as the backdrop to present some truly enjoyable characters. There are some twists and turns which are a little too projected and sometimes seem at odds with the core themes, and there’s the odd moment of throwaway nonsense that is in there in a laboured attempt to elicit a laugh, but for the most part, each character is fundamentally interesting and their plight is one that’s easy to sympathise with. I haven’t enjoyed simply following along with a cast of characters on their journey in an Idea Factory game quite as much as I have this one.

Backing this excellent, exquisite, thought-provoking and subversive narrative is some really enjoyable turn-based combat. Unlike most JRPGs, where the action occurs on the ground, in Dragon Star, characters and enemies can also occupy one of three heights, and as the battle continues on, you’ll need to move between those to face off against particular enemies and try to protect vulnerable characters. Special attacks can target particular sections of the play field, but the addition of the additional axis for combat can make it much more difficult to hit everything at once. Finally, you will want all of your characters to “devour” the enemies, which is critical to character development. But to do that you’ll need to manipulate the turn order so that the right character is the one doing the devouring as the enemy’s health approaches zero.

There are only two meaningful issues that I have with Dragon Star Varnir. The first is the world design itself. There’s quite a lot of busywork involved in wandering around (you’ll need certain character’s special abilities to access certain areas), and this all comes across as quite arbitrary and cheap level design. It’s something that I didn’t notice to quite the same degree when I played it through the first time, because it was all new then. The second time through, though, this level design, despite not being substantially different to some other Idea Factory titles, really bothered me. 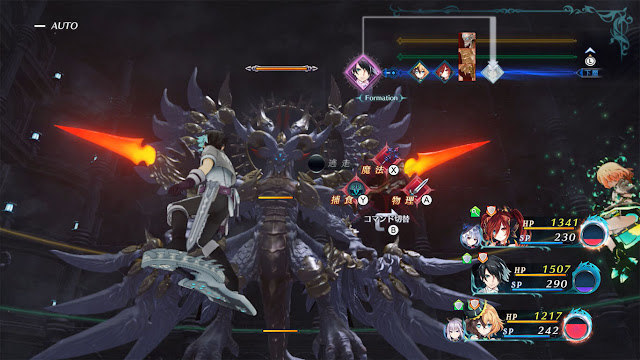 The other issue has to do with the transformations. Again, like most Idea Factory games, the characters can go super-powered at times, which strips them down to wearing bandaids, but substantially ups their power. Unlike most Idea Factory games, you can’t actually control this transformation – once a character has built up enough of a meter they will automatically do this. This in turn means that you’ll frequently go super-powered on a weak monster, and then have to struggle through a boss immediately after without this power. Why on earth the developers thought that this is a good idea is beyond me.

To end the review on a high, Dragon Star Varnir on Switch might be compromised by the tech a little, but it’s the complete edition, with a wealth of DLC material – including an “experts only” difficulty setting for the most committed fans. That DLC wasn’t ever worth buying with the original release, but as part of a complete package, it’s fun to toy around with.

My suspicion is that Dragon Star Varnir will be remembered as one of Idea Factory’s greatest. There are some corners cut with the gameplay, and the Switch port isn’t ideal, but the concept, theming, art and narrative are all so different that this stands as one of the more interesting and narratively innovative take on the Grimm brothers tradition. 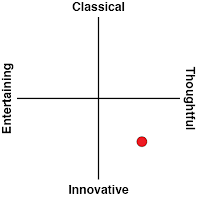 When scandal hits should we re-evaluate our opinion of the artist’s work?