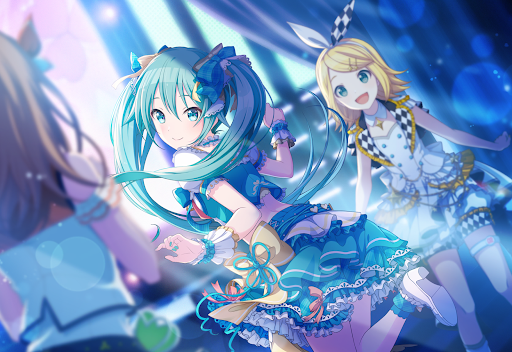 Okay, it might not be the full new Hatsune Miku console rhythm game experience I so desperately want (or even the Hatsune Miku dating simulator that I keep emailing SEGA about – they ignore me now and I don’t know why), but there is a new Miku game coming out west, and that is cause for celebration. Hatsune Miku: COLORFUL STAGE! is a mobile game that has been doing the rounds in Japan for a while, and now, courtesy of publisher Sega, it is coming out west later this year.

From the press release: “Players will discover a cast of 20 original characters, split into five bands, each with their own musical style and backstories. Hatsune Miku’s biggest hits, including “Tell Your World” by kz, “Melt” by ryo, and “ROKI” by Mikito-P, as well as brand new songs produced for the game will be featured in the game.

Players will tap to the rhythm and face challenges with five different difficulty modes for each track that can be played solo or with friends.

There have been some Miku games released on mobile in the past, but never a full-on, bonafide rhythm game. The downside to Sega and developer Colorful Palette doing this is that it’s no doubt going to be a free-to-play game, and I’m going to spend a fortune on it (particularly if the monetisation involves costumes like bikinis). The plus side is that it is the modular nature of rhythm games (add new music track = make more money) makes it ideal for the endlessly iterative nature of free-to-play.

I’ve played a lot of mobile games over the years. What do you bet this is the one that really sticks with me? No news on the release date just yet, but it will be this year (and there aren’t many months left of that, so it’ll be out soon).