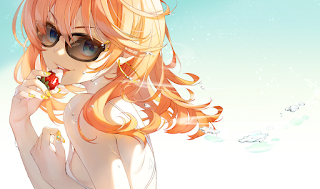 We’ve been drip-feeding bits and pieces regarding the next Dee Dee visual novel, A Week on the Water. Today we’ve put out the official announcement release, over on Games Press. It re-treads a lot of what we’ve already shared, but we’ve also shared the game’s key art, and there are some tidbits of information that is new in the press release. So I’m re-printing that here for your reading pleasure!

DDNet Announces A Week on the Water – A Comedy And Celebration Of 80’s Cinema!
Get nostalgic for that unique era of cinema with the latest in the My Time With Dee Dee visual novel series

DDNet, the game publishing arm of DigitallyDownloaded.net, is thrilled to announce the next edition of the My Time With Dee Dee visual novel series. With a new character artist and original soundtrack giving the game an all-new aesthetic and tone, A Week on the Water is the most deluxe entry in the series to date.

It’s the prize of a lifetime; an all-expenses-paid week on a 100-foot superyacht. How would you spend that week living up life as a millionaire?

Well, what if it ends up raining… a lot? Just what do you do of a yacht that suddenly feels so small?

A Week on the Water is a light and bubbly comedy-themed visual novel, with plenty of narrative branching paths and opportunities to get stuck into hijinks with Dee Dee and her friends. It’s also loaded with references to the 80’s, because 80’s films in particular are awesome and worth celebrating. See if you can spot all the references as you play along.

A Week on the Water will release in December 2021/January 2022 (exact date TBA). There will be a demo released ahead of time to give you a taste of what to expect. Additionally, for fans there will also be a soundtrack and digital art book edition, so you can get a behind-the-scenes look into how the game was made!

Key features of A Week in the Water include:

– All-original sprite and CG art by Somate Studio, giving Dee Dee an all-new, glamourous look.
– An original OST, featuring up-and-coming artists and talent, that will give the game its own vibe and tone.
– Five days of freedom on a boat – do what you want, when you want. Hang out with anyone you like. Visit forgotten little islands, go for a swim… or just kick back with a book. With dozens of opportunities to make decisions, how you fill your time will determine which of the 5+ endings you end up with.

As with all My Time With Dee Dee visual novels, there will also be a “Teach Me, Professor,” bonus mode that gives you an interactive essay looking at the thematic and narrative underpinnings that went into the making of this game.

A Week on the Water will be available on platforms TBD. You’ll be able to purchase it then, or support the development of the game by backing DDNet on Patreon. In return, you’ll gain each visual novel we produce as part of your pledge – even at as little as $1/month.