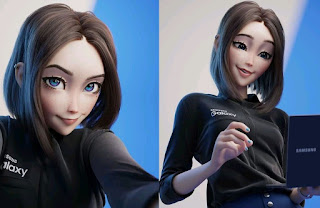 Creating mascots to represent technology and ideas is all the rage now. Hatsune Miku started that off, with Crypton turning some really simple voice software into a worldwide phenomenon by giving that software an adorably cute mascot. Three billion fan arts, video games, music CDs and live concerts later, Crypton is a wealthy company, and that wealth has nothing to do with its product, but rather, its marketing collateral. Now Samsung’s looking to achieve something similar with Sam, a digital character to represent its virtual assistant tech.

Unfortunately for anyone that cares about interesting aesthetics, Sam looks like she was a reject from a Pixar or Dreamworks film. Or a free-to-play content game like Fortnite. Sam is boring.

I’ve no doubt that Sam will be popular. I mean, if you type in “Samsung Sam Rule 34” in Google you’re already going to get exactly the kind of results that you would expect, and Sam’s been around for all of a day. Don’t think for a second that Samsung didn’t know exactly what they were doing with this.

(Also, don’t actually search for that. I took the hit so you can preserve your sanity).

There’s a bunch of people that call Sam “anime”, because she comes from a company from an Asian country, but no. Sam’s very much of that western animated aesthetic. This is scientifically proven to be a successful and appealing aesthetic, and that’s why every single example of it always look exactly the same. This style is popular because it’s the aesthetics of homogenisation. Sam appeals to absolutely everyone because absolutely everyone is in Sam; she’s a mesh of every single human quality, beauty and flaw possible, and while that makes her instantly relatable to everyone, it consequently means there’s very little distinctive or actually interesting about her. But for most people, simply looking to consume content, that doesn’t matter, because she’s pretty enough content that makes consumption effortless.

Say what you want about Hatsune Miku or Ai Kizuna; those characters don’t appeal to everyone but at least they’re original creations with a specific aesthetic that makes them distinctive and, in some ways, challenging. Sam, by contrast, is just boring.