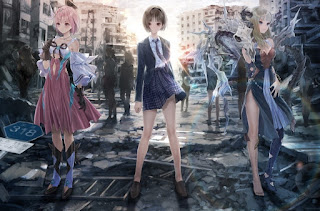 Blue Reflection is one of the most beautiful games that has ever been made. But it was also one the flew right under the radar (people saw bath scenes and the school setting, and really got the wrong idea about what the game is about), so I wasn’t sure we’d ever see it return. Thankfully, Gust and Koei Tecmo have our back. Blue Reflection is getting not one, but two new games.

Related reading: Our review of the original Blue Reflection

We don’t have any further details about any of this right now, though Mel Kishida, that absolute God of art, is returning to contribute his genius with the art design. As you can see, it’s unbelievably beautiful already.

Welcome to the new-look DDNet store! So much great Dee Dee merch in here!