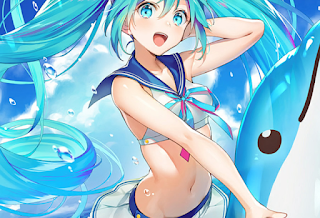 If you haven’t played MIKULOGI on mobile phones yet then… what the hell, folks? Don’t you even read DigitallyDownloaded.net? And even then, how does Hatsune Miku + Picross not sound like the best thing ever? The good news is that it really is that good, and now it’s coming to Nintendo Switch!

According to a Tweet from the official Hatsune Miku Twitter account MIKULOGI, being rebranded as “Hatsune Miku Logic Paint S” will release on the console, with upgraded contents, no less:

I’m so excited I’ll even forgive Crypton for using the dirty “C” word. Content. Bleh. You’re better than that, Miku.

But having more of you on my Nintendo Switch is pure joy. We will, of course, have a full review once the game has gone live.

Story of Seasons: Pioneers of Olive Town – Why I will forever love this series