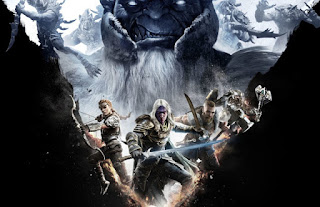 You’ve got to feel sorry for Dungeons & Dragons a little. It’s the biggest name in tabletop gaming, by far, and back in the day, with the likes of Eye of the Beholder through to Baldur’s Gate, it was also leading the way with video games. But then something unfortunate happened. Atari got the license, and things have never been the same. After years in which the best effort was a mediocre free-to-play MMO, the pen-and-paper publisher, Wizards of the Coast, decided to give video games a crack themselves, and purchased the studio, Tuque Games, to do so. It seems like that was a bad move, because Dungeons & Dragons: Dark Alliance, looks like the developer understands nothing of the property.

It is, in theory, meant to be a game that follows the adventures of Drizzt Do ‘Urden – the famous Drow elf creation of R. A. Salvatore, and his friends on a quest through the iconic Icewind Dale setting. Game Informer got about 10 minutes of hands-on time, and not a second of it really resembles Dungeons & Dragons, Drizzt, or Icewind Dale. Instead what we have is… a grindly, relentless combat system against enemies that look like they were pulled directly from WB’s Lord of the Rings Assassin’s Creed clones.

The game’s description doesn’t help. “Earn powerful gear!” it proclaims, conveniently overlooking that most of the characters in the Drizzt novels have very specific gear for very specific narrative and thematic reasons, that they just wouldn’t toss aside. “Frost giants, Beholders, White Dragons—muster the strength to defeat them all against insurmountable odds,” the game promises… except that the “boss battles” in the Drizzt novels weren’t just generic fights with pictures torn from a D & D monster manual, and if this game was really respectful to the property that line would be more like “battle Errtu, Drizzt’s demonic balor nemesis, in an earth-shattering battle for the Dale.” And so on and so forth.


From the day this game was announced, everything about it has been screaming “this is a generic action game and the developers are using & abusing the license to sell copies.” As I noted back when the first trailer landed: “Salvatore is no Tolkien and his stories are most assuredly pulp fantasy, but they’re also not mindless action. In fact, they are often quite rich in terms of the way they explore the nature of good and evil, the value of companionship, mortality, morality, love, hate, and even more esoteric themes like theology and the impact of nostalgia. Drizzt novels feature action, but they’re as much about the narrative interactions between Drizzt, his friends, and, particularly, the rogue gallery that he squares off against.”

To be frank, this game looks like a load of content, and while it may play well, there is clearly so little work done by the developers to understand either D & D or Drizzt. Anyway, it lands on PS5, Xbox Series, PS4, Xbox One, and PC on June 22. If you’re a fan of Dungeons & Dragons or Drizzt, I highly recommend you wait for our review of this one. Play the old Icewind Dale game as you wait. That game got it.

Getting into Saviors of Sapphire Wings: What you need to know