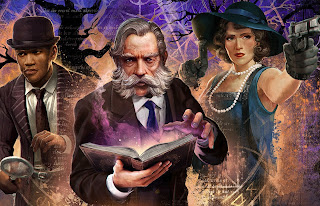 If you’ve ever played the Arkham Horror physical board game, then you should be very much looking forward to Arkham Horror: Mother’s Embrace, as a digital adaptation of that most excellent game. It’s being published by board game specialise, Asmodee Digital, and now has a release date for PlayStation 4, Xbox One, Nintendo Switch and PC (via Steam) of March 23.

While it has been inspired by the board game, Mother’s Embrace is its own thing as well, being built specifically for the video game medium. It allows you to choose from 12 different investigators, each with their own skills and talents, and assemble a team to investigate a mysterious death (and the inevitable mythos-based conspiracy behind it). There will be famous locations from Lovecraft to explore – including the Miskatonic University, Arkham Asylum, and the swamps of Louisiana. There will be turn-based combat and an all-new story to play through, written by the board game creators themselves.