The holidays are the perfect time to cozy up with hot chocolate and a visual novel. Given the jolly nature of the season, you might be looking for a story with a little positivity to go with its drama (rather than an onslaught of soul-crushing darkness that makes your poor grandmother sob as she stares into those benumbed eyes). In that regard, the Phoenix Wright series is a reliable old favourite. With its comedic investigation sequences and courtroom shenanigans, Phoenix Wright often makes for a breezy read. When situations heat up in severity, there’s a bumbling but good-natured protagonist you can root for. 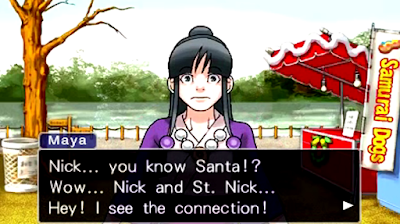 In terms of pacing, the trilogy shines as a Christmas selection. The story is broken down into various courtroom cases with clearly defined scenes that prompt you to save your progress, so it’s well-suited to being picked up and put down as needed. While there is some thematic depth behind its approach to the subject matter, it’s a friendlier series that doesn’t expect you to juggle many ongoing plot threads or earn a law degree. Not that a law degree would help you make sense of cross-examining parrots or precognitive hemorrhoids…