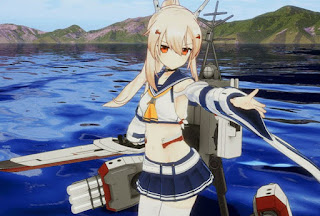 News by Matt S.
It’s a 3D SHMUP/visual novel combination with some very, very pretty girls, so it should come as no surprise that we’re looking forward to the Nintendo Switch port of Azure Lane: Crosswave. Idea Factory has given us a release date, now: the game lands on February 19 (February 16 for Americans).

The Switch version features an improved photo mode, allowing you to pose your six favourite characters for a happy snap (the previous maximum was three), and with a host of new camera angles to play around with. You’ll also get a couple of DLC characters from the PlayStation 4/PC versions of the game as part of the game.

As we noted in our review of the game on PS4: “What’s important is that it’s all executed so well that Azur Lane ends up being too charming to put down, and there’s more waifu bait in this one than any other game you’ll play in 2020.”


Look forward to having that on the go early next year!