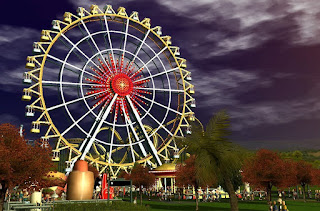 RollerCoaster Tycoon 3 is a beloved simulator, and with Atari since driving the property into the dirt, it’s the one that people look to as the classic in the theme park sub-genre (eclipsed, perhaps, only by the very recent Planet Coaster). With a better-than-pedestrian port to Nintendo Switch, the classic lives on, and it is every bit as playable and entertaining as it ever was… there’s just one very big omission.

Before we get to that, though, the good first: RollerCoaster Tycoon 3 features a mammoth number of levels to play through. Each transports players to a particular theme – be that the utterly standard starting park, through to more bizarre Halloween and Sci-Fi themed worlds, and each time players are set three distinct sets of challenges. Those are broken down as Bronze, Silver and Gold, and as you complete one you move “up” to the more strict challenges of the next. These can range from having a certain satisfaction level in the park, to having enough terrifying rides for patrons to jump on, right through to simply having a park that’s worth enough money. On the later levels, those Gold objectives are made incredibly difficult thanks to tough environments to build parks in, limited land space, and picky consumers. And then there are two expansions built into RollerCoaster Tycoon 3 with even more parks and objectives to play through.

Each park offers a different visual experience too, with different themed rides to build and a different ambience. With dozens (and dozens) of different rides, ranging from humble merry-go-rounds, to water parks and then the iconic roller coasters, you’ve very much encouraged to be creative and let your imagination run free in designing the park of your dreams. You’ll also need to consider the amenities for patrons (it’s hilarious that you can charge people to use the toilets and create that pure libertarian utopia park you would never actually want to visit in the real world), give them food, drink and souvenir stores to throw their money away at, and hire, train, and manage staff so that the part remains safe and clean and the rides are maintained. There’s a lot to manage there, and when you start seeing patron numbers drop away and park rating decline, it can take some digging to nut out the reasons… but then simulation fans love this spreadsheet stuff. 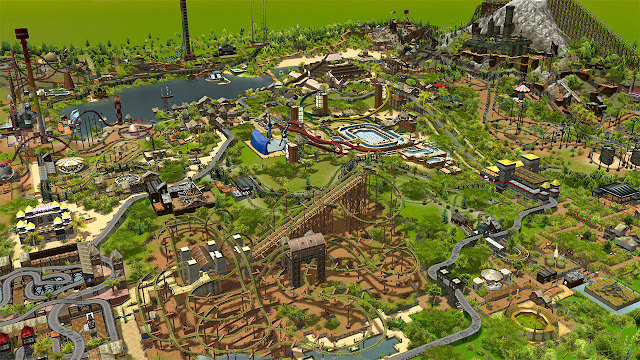 On the Switch RollerCoaster Tycoon 3 shows its age, but it’s still pleasant to look at. You can zoom the camera right down to ground level, and admire how popular the rides and part hotspots are. There’s little emergent story moments that arise from having that kind of intimate experience of your park; for example, I had a really popular ride that had really long lines, and I put a pool with lots of sunbathing deckchairs and spa baths right next to it, thus (in my head, not mechanically), giving those waiting in the lineup some top-quality people-watching voyeurism to pass the time. Then I zoomed the camera in to the poolside perspective and felt uncomfortable about what I’d done. Thankfully, I realised that I could stick a giant novelty statue between the two facilities to give the bathers some privacy. I wanted to look after the swimmers. That pool was a major income earner for me, especially when I put some overpriced sunblock and swimwear stalls in the walk up to the pool… in my headcanon, they were selling knock-off “designer wear” for a premium, and my patrons didn’t seem to mind paying.

This is also why you’re able to ride most of the rides in RollerCoaster Tycoon 3 – you get an awesome view of your park from the ‘coasters and big drops, especially. You can actually design your own roller coasters in the game, with your designs being given a rating on how terrifying/exiting and safe they are, and there’s a lot of creativity there in building something that you’d love to ride. Being able to virtually ride it afterwards is a great touch. It’s not the most productive use of your time, but hey, if you’re going to run a theme park you should enjoy theme park rides, right?

With so many rides, decorations, store and amenity options, no two players will design the same park, and there’s so much fun involved with running through all the levels chasing those “Gold” ratings. The problem is – and it’s a big one – there’s no meaningful sandbox mode. The game has a sandbox, but it provides you with unlimited cash and is really just a practice mode before moving back to the “story” missions. As much as I do enjoy the targetted objectives in a simulator, my default preference in any kind of “builder” is a sandbox mode with stakes. I like the challenge of taking a completely blank slate environment, balancing the budget and growing my city/park/building/whatever without there being a specific endgame to my actions. RollerCoaster Tycoon 3: Complete Edition, for all of its content, doesn’t actually offer me this. 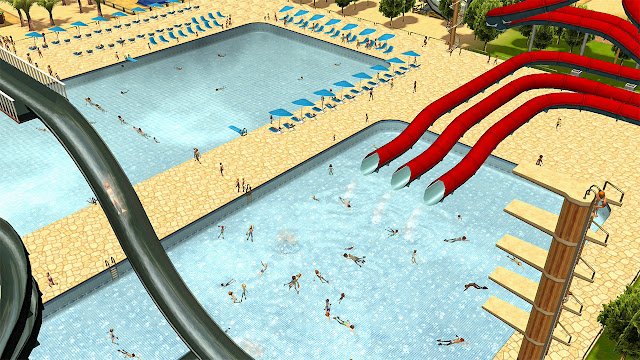 Nonetheless, RollerCoaster Tycoon 3 is a delight on Nintendo Switch. It’s the ideal pick-up-and-play game for those commutes, it’s also the kind of game that you can play while also doing something else, like watching a movie or TV show. And it’s the kind of game that, if you want it to, can occupy hour upon hour of your time. The Nintendo Switch is steadily building up a library of excellent simulators, but even among them, RollerCoaster Tycoon 3 might be the most playable, blissfully entertaining of them all.