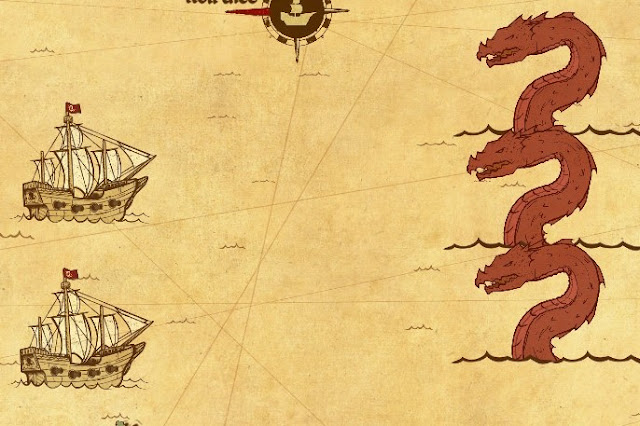 Here Be Dragons wants to be a satirical turn-based strategy game. What it is, though, is a deeply unfunny board game with an lovely (but pointless) art style. It’s fine for what it is, but it should have been so much more.

Let’s start with the satire, because this thing is about as funny as the idea of another four years of President Trump. Here Be Dragons is a retelling of sorts of the adventures of Christopher Columbus (yes, that one), only with sea monsters and things thrown in to fantasy it up. Now, Columbus wasn’t a funny guy. Nor were his stories particularly amusing. That’s not to say that he couldn’t be satirised, because if you can satirise Hitler you can satirise anyone, but good satire isn’t delivered as one punchline after another to create a caricature with no depth beyond that. Unfortunately, that’s what Here Be Dragons does. Before each chapter, you get a couple of silly little punchline jabs that do nothing other than to make everyone out to be idiots and fools, and then you get on with the combat. There’s simply nothing interesting in that narrative as a consequence.

The art style is unfortunately wasted. It’s got a lovely paper-and-ink drawing aesthetic, but with no narrative to support it, it comes across as some arbitrary effort at a ye olde time look. Animation is kept nice and simple to support the board game-like theme, but if you’re going to go for a distinctive and different aesthetic, it does need to be explained, and even within the context of an attempt at satire, Here Be Dragons’ art style is… not that funny in and of itself. Character, ships and monsters are all fairly flat and standard, less “surreal” than just “sketches.” It’s still a nice aesthetic on the face of it, but it’s not in service of anything. 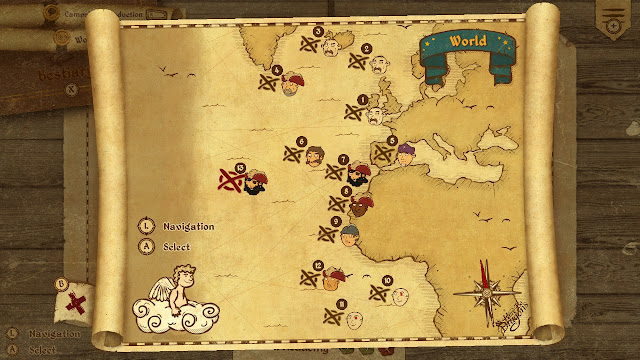 The combat system is fun, and needed to be because there’s not much else to do in Here Be Dragons. It basically plays out like a simple board game – at the start of a round, a number of dice are rolled, and then players and the AI take turns to assign those dice to various functions. Some improve attack or defence rates. Others do bonus damage at the end of the round, and still others have healing effects. There’s just one additional catch – whoever has the highest total in their pool of dice loses initiative, meaning they go second in everything, and in this game, the initiative is everything. So there’s the need to carefully balance giving dice to your ships while making sure the enemy is going to go last and have bad dice. Then all the attacks play out and, assuming both sides survive, it’s on to the next round.

There are a few issues with this system. For one thing, skirmishes are designed to be incredibly close and quite difficult almost from the outset. Almost as soon as the tutorial is over you can (and will) get creamed by the enemy AI with regularity. The reason for this is due to the second issue; the randomness of dice rolls. When success ultimately rests on having dice rolls go your way, you end up playing a glorified gambling game, and restarting the same battles with some frequency until the dice go your way. Even then, you need to assign those dice right, and there are abilities and uses of each ship which just won’t work for that particular level that you’re undertaking.

It’s less strategy, as such, and more akin to a puzzle game. Assuming the dice work to your favour well enough to be a hand you can play, then victory hinges on you understanding which abilities and dice to utilise, with very little room to experiment. Later levels are quite complex, but it doesn’t seem to matter how much more complex things get, there almost always seems to be just the one solution to each challenge. This in itself isn’t inherently a problem. Puzzle games are fun and piecing together now to get through a level is a reward unto itself. The problem is that that’s not how Here Be Dragons is framed. A turn-based strategy game needs to give players a system to work with but then allow them creative freedom to approach the challenge in a number of different ways. Imagine if there was only one way to succeed at Civilization or Crusader Kings or whatever your favourite strategy game is? Here Be Dragons is about as enjoyable as that. 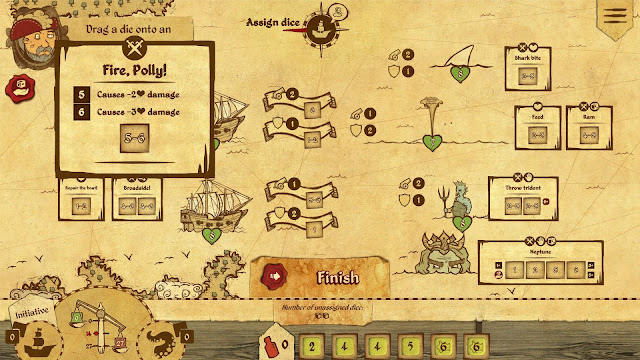 There’s a good number of levels and the challenge is stiff enough that you’ll be plugging at it for quite some time. Here Be Dragons is limited, though. It’s not as funny as it wants to be, claiming to be a satire, but failing to satirise anything, and it’s not nearly as strategic as it should be, since it’s more like a puzzle game that just happens to have dice rolls to potentially screw everything up. It’s enjoyable and the distinctive art style shows that the developers did want to achieve something unique, but Here Be Dragons needed a little more work on executing against the intent.