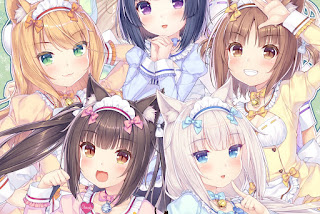 Fanservicey cat ’em up (what a great term) visual novel series, Nekopara, has been a bit of a hit on console across the first three episodes and now, thanks to CFK, we have the fourth to look forward to in December.

Related reading: Our review of the first Nekopara on Nintendo Switch.
For those who have never played a Nekopara game before, basically, these are comedy visual novels with a healthy dose of “romance” in which you play as a male patisserie owner who finds themselves looking after an ever-growing harem of cat girls. Who all adore him and are so very very yummy… ahem.

These games have adults-only scenes on PC, but on console you can instead look forward to some fan service and risque lines, which oddly add to the charm and humour of the thing when removed from the sex. I actually prefer this series “censored” as I think it’s more tonally and narratively consistent without those hardcore scenes, and I’m looking forward to this one in kind. The fourth chapter involves a trip to a hot spring, so expect plenty of bath-time humour which we all know and love from Japanese anime at this point in time.

It will launch worldwide on both Nintendo Switch and PlayStation 4 in December, though we don’t actually have a specific release date just yet. Stay tuned! We’ll be covering this one for sure.