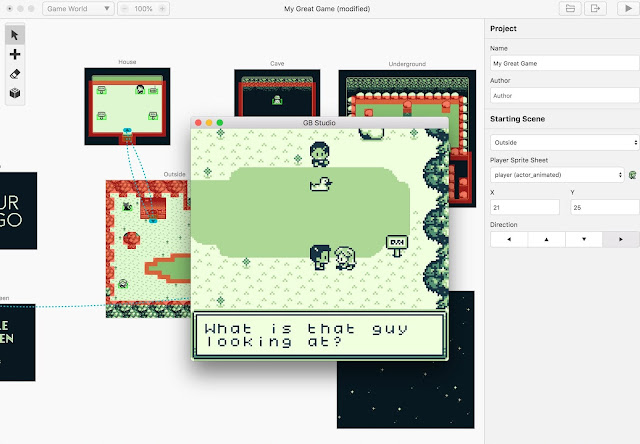 One of the best thing about itch.io is that it provides an outlet for the most creative, alternative projects… and producing Game Boy games in 2020 certainly qualifies as that. Make the game and there’s a wealth of distribution opportunities available to you – emulators on PC, inexpensive little consoles built for emulation, and even stylish devices like the Analogue Pocket. You could even manufacture some cartridges for the retro collectors out there and go all out. All you need is the ability to build the game, and then export it in the right file format for the console.

Itch.io comes to the rescue again courtesy of GB Studio. This little “maker” project was first released back in mid-2019, but has had ongoing development since, with a new “beta” version just released recently. The software’s completely free if you want (you can make a donation to support the development too), and there’s a surprisingly large number of games available that have been made on it. I guess people really enjoy the challenge of making something with such limited capabilities.

Best of all, GB Studio was produced so that people could create their games without any coding experience. It’s a drag-and-drop interface that rewards artistic creativity rather than coding skills… though the software is also completely open-source, so if you want to delve deep into the code to further tailor it, you can do that too.


These “prosumer” tools, that we’ve seen a real proliferation of over recent years, continue to be one of the most exciting developments in the games industry. They work on so many levels – they give younger people a first exposure to game development and a chance to get a taste for what may well become a career goal for them. For those who enjoy creation, but aren’t necessarily coding-inclined, these tools give them the opportunity to realise their vision in terms of storytelling and ideas without having to learn an entirely new skill. And then there’s the people that use these tools to start learning coding too, and end up being able to twist these tools to the point that they’re unrecognisable and they’re able to create full-fledged commercial projects using them.

They’re incredibly powerful when paired up against marketplaces and distribution platforms that don’t have the kind of requirements that a Steam or game console does. That’s not to say games created using these tools can’t necessarily end up on those platforms. The best often do (look at the success that To The Moon has enjoyed over the years). However, it’s not necessary for them to do so. Itch.io might not produce the kind of revenue that a Steam might, but they do provide an opportunity for a developer to get projects out there, and perhaps become noticed by a small publisher that will take on the porting and localisation. Patreon offers the opportunity for developers to interact directly with a community and develop a “subscription-like” support for their work. And it’s entirely possible to make and distribute games purely for fun.

It seems like a free-for-all at times, and it can be a pain to navigate through itch.io for the good stuff… but then as a grand communal “gallery” for video games as artworks, itch.io has proven its value many times over, and it’s often tools like GB Studio, Visual Novel Maker, RPG Maker, GameMaker, and other “entry-level” tools that are driving it. Already some of the games that have been produced on GB Studio have been truly memorable for the quirky creativity they offer. At some stage, I’ll probably give a Dee Dee Game Boy game a crack (when I’m not so busy with these VNs), but in the meantime, do keep an eye on the games that are made using the platform, grab yourself a cheap little emulator console, and enjoy an “underground” side of game development that is truly vibrant and exciting.

Developer Q & A: On the making of Monstrum